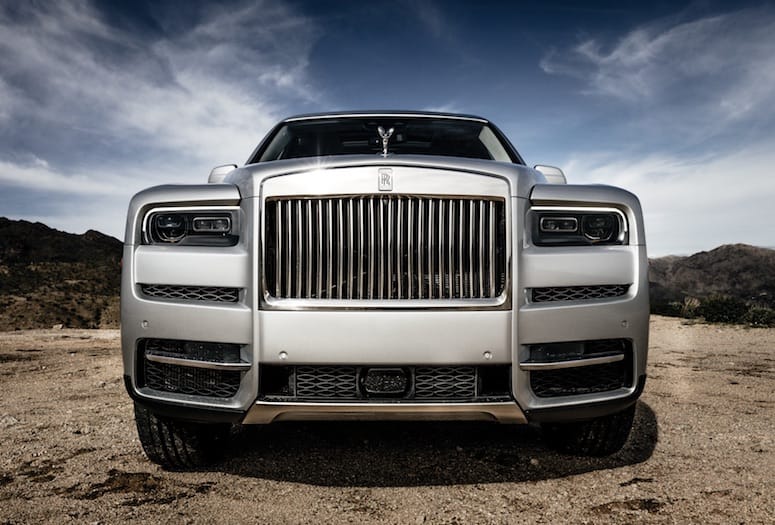 The catchphrase for the Rolls-Royce Cullinan, the brand’s first sport-utility vehicle, is “Effortless, Everywhere.” This was fortunate for me, as the day I picked up my $325,000 (base price) Roller, Palm Springs had
just been subjected to one of the worst rainstorms in its history, with epic flooding that closed many roads and undermined those who make their way from the Coachella Valley up to the mountain communities of Pine Grove and Idyllwild.

The rain also washed away my chance to drive the Cullinan on the track at The Thermal Club, a private motorsports community where I picked up the SUV. I was supposed to drive the car around the technical 4.5-mile circuit at the country club–like setting, passing by the seven-figure “garage villas” that wealthy members have built to house their seven- and eight-figure collections of vintage and contemporary exotic sports cars. Thermal seemed at once a very fitting and wildly inappropriate location for such a car, priced for the .01 percent but with a ride that is more like your ideal Sleep Number than your ideal lateral G-force number.

Instead, as the downpour left the track puddled and slick, I did a lazy tour of the Thermal grounds in the big Roller. This was probably for the best. The BMW Group, which has owned Rolls-Royce since the late 1990s, has a strong presence at the club. The Bavarian automaker holds a range of driver education programs here year-round at the BMW Performance Center, typically utilizing its M Series sedans, coupes, and SUVs. The Rolls-Royce Cullinan is none of these things.

What is it? Well, an extremely luxurious, high-riding vault capable of insulating passengers from — and traversing — whatever obstacles may cross its prodigious path.

The Cullinan was born from the idea that, in the contemporary ultra-luxury automotive landscape, almost all eligible consumers have in their stable one or more “occasion” cars, something like a Rolls-Royce Phantom sedan: a vehicle they take out on the town or to a special function when they really want to be seen. And then they also have a luxury SUV, often a top-of-the-line Mercedes or a Range Rover. 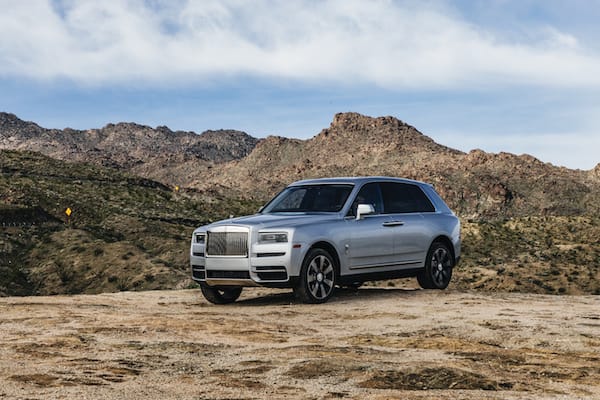 Viewing this as a missed opportunity to sell another of their extortionate vehicles, and keep these customers in brand, Rolls — along with almost every other manufacturer (Aston Martin, Bentley, Ferrari, Lamborghini) — has developed an SUV in this profitable slice of the automotive pie.

Though Rolls had never produced an SUV — or even a car with all-wheel drive — it does have some heritage in the category. The 113-year-old British brand first proved its engineering mettle in the early decades of the 20th century by participating in long-distance endurance races throughout Europe, often over-landing on roadways that were barely existent at best. The fleet of vehicles that T.E. Lawrence (“Lawrence of Arabia”) used during his desert campaigns on behalf of the British crown during World War I consisted mainly of Rolls-Royces, modified and armored to brave the sands and conflict zones. And very early in its existence, the brand established a foothold in the then British colony of India by selling customized vehicles to the aristocracy there, Maharajas and Maharanis, that could be used off-road for adventuring and hunting.

Still, a contemporary Rolls-Royce is kind of the opposite of utilitarian, so the idea of creating something with “utility” in the category name feels a bit antithetical. Fortunately, the Cullinan has been imbued with all of the requisite Rolls-Royce luxury trappings. Unblemished hides — from bulls raised in northern climes away from barbed wire fences, and thus without stretch marks, mosquito bites, or pinpricks — cover the seating surfaces. Rich, thick floor carpets add sound insulation and delight, urging you to take off your shoes and run your feet through them. Perfect wood veneers, or technical materials like pierced aluminum, piano black, or even carbon fiber, decorate the dash and door panels, as if they were in a drawing or media room. And there is chromed metal jewelry around the dash and cabin, including “organ stop” pulls by all of the vents, like the controls used on a vintage pipe organ, to allow or discontinue the flow of heated or cooled air. 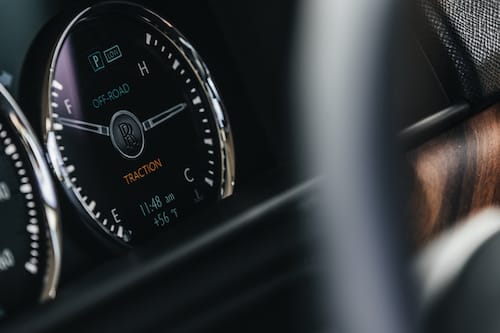 “A contemporary Rolls-Royce is kind of the opposite of utilitarian. Fortunately,  the Cullinan has been imbued with all of the requisite luxury trappings.” 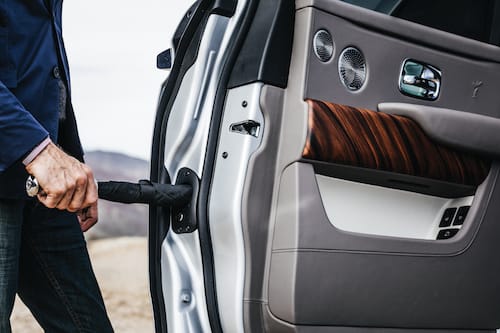 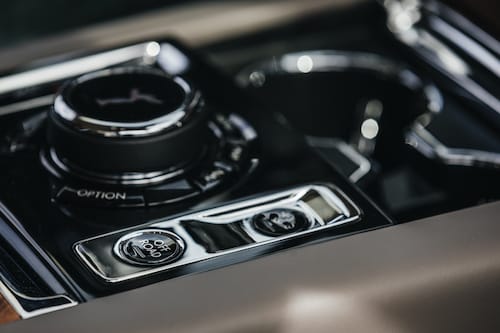 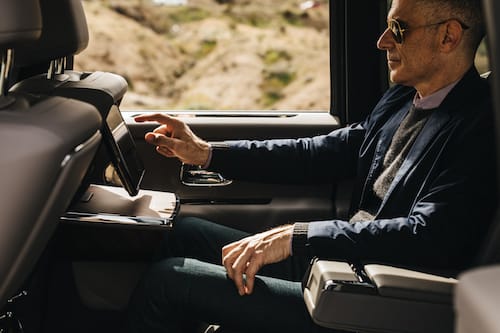 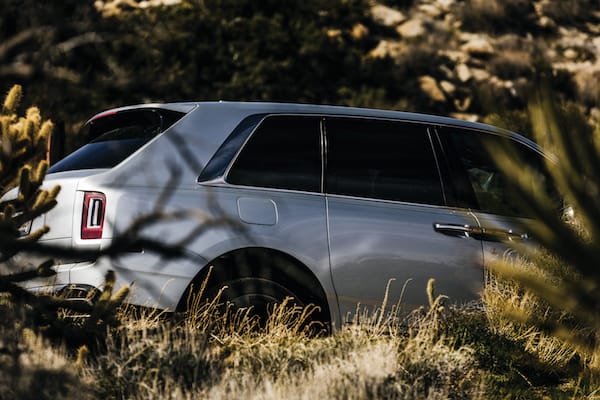 Besides all these traditional deluxe features, there is also a host of power-operated luxury amenities. They can be used to adjust the heated, cooled, reclining, and massaging seats — available front and rear. They can open and close the rear tray tables and the integrated tablet screens hiding behind them. They can power open the accordion door on the available champagne fridge between the two rear seats. (A whiskey decanter can also be spec’d.) They can even shut the back “coach doors,” hinged at the rear, for more elegant ingress and egress. What’s more, they can roll out a pair of hidden seats from under the floor in the cargo area that then open up atop the lower portion of the clamshell rear hatchback for viewing events like polo matches or fox hunts.

The Cullinan is also laden with the latest technologies: computer-, laser-, and camera-assisted systems that allow it to stay in its lane, follow the car in front of it at a set distance and speed, see in the dark, display an image of its infrared visions on the dashboard screens, and stop suddenly in the case of an impediment to which the driver fails to respond. But it may be the Cullinan’s “off-road” button that impressed me the most. Pushing this unleashes all of the car’s sure-footed capabilities, engaging the all-wheel-drive system, raising the suspension to provide more ground clearance, and adapting the acceleration and braking responses for more stability in varied terrain.

By a length a half-foot more than that of a standard Escalade and almost 3 tons to motivate, the Cullinan is not exactly nimble, but it has a special rear steering system that, at low speeds, turns the back wheels in the opposite direction of the fronts in order to diminish the turning radius. It also has a twin-turbocharged and impossibly smooth 12-cylinder engine producing 563 horsepower, enough to hustle it from 0 to 60 mph in only 5 seconds and provide it with motivation true to its tagline. I drove it up a steep hillside and down a long sandy desert road on the edge of the San Jacintos. I drove it through another, less fearsome rainstorm. I wanted to try it out on the snow at the top of the mountains, and I think it would have handled the slick stuff with aplomb. But even the intense abilities of this super-deluxe off-roader couldn’t transgress the storm-washed roadways leading up to the snowy peaks that rim the Coachella Valley. 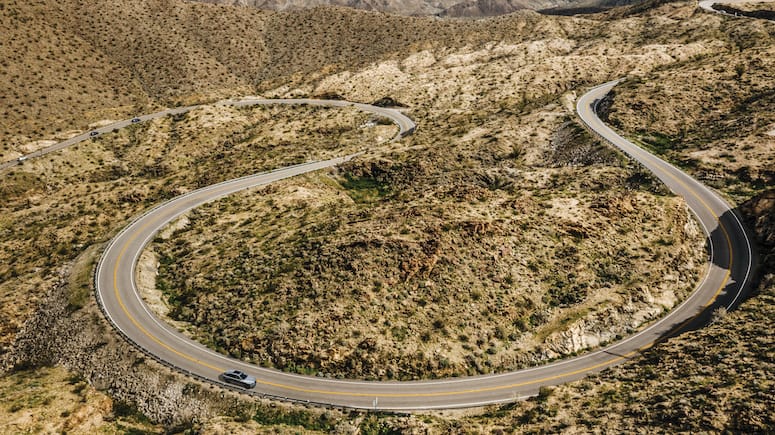 Loaded with luxurious amenities and state-of-the-art technology, the Cullinan offers a smooth ride on the street and all the ruggedness you want off-road.

Instead, I decided it would be a good idea to use the car to humiliate my 19-year-old niece, who is attending Pitzer College about an hour west of the valley. Family weekend at the school happened to coincide with the duration of my time with the Cullinan, so I picked up my visiting sister and brother-in-law to see if we could make waves on campus.

Sadly, instead of being embarrassed, my niece was impressed, overjoyed even, with all of the features integrated into this rolling vault.

She toyed with all of the power-operated gewgaws, including the electric heating elements integrated into the rear C-pillar, behind the back window and near her cheek. She ran her hands over the flawless leather and her feet over the carpets. She declared the car to be larger and more comfortable than her dorm room, an assertion that I fact checked and found to be true (far cleaner, as well). She even invited her boyfriend over to check it out.

A well-to-do young man from the Los Angeles area, he arrived driving his own Mercedes SL roadster of a quite recent vintage, a six-figure car when new only a few years back. I deigned to give him a ride, tooling around town, holding on to the traditionally thin Rolls-Royce steering wheel, and demonstrating some of the more outré features. I showed him how the Spirit of Ecstasy hood ornament retracts when the car is locked, to evade the greedy hands of vandals. I even had him look outside at the caps covering the wheel hubs — each weighted and free rolling so the brand’s double-R insignia remains upright. 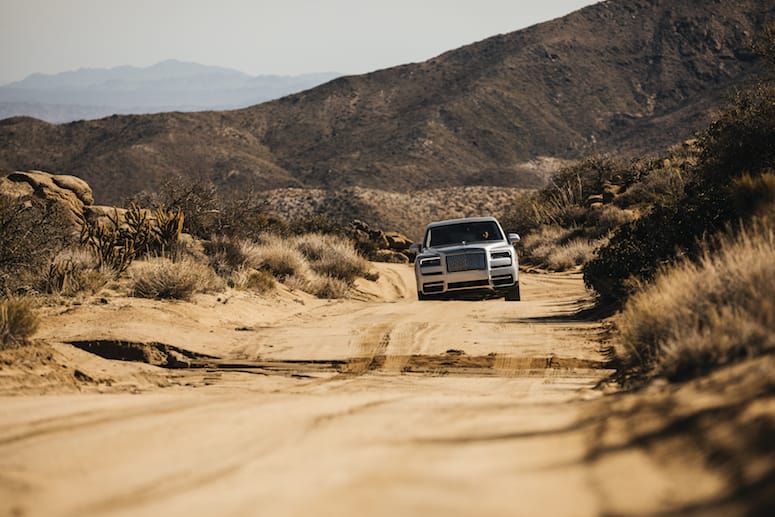 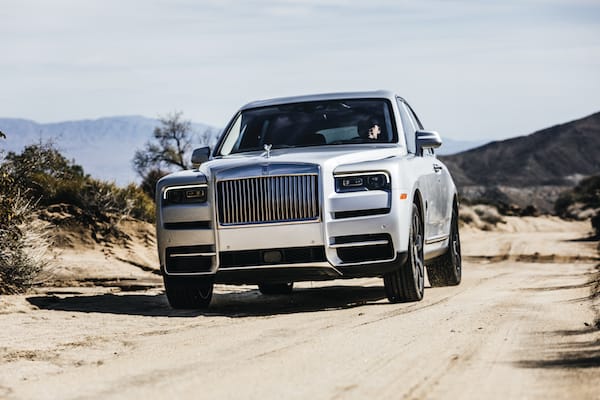 At the end of the ride, I pulled back up to the his dormitory so that he could get out and get ready for his next class. But he seemed to have one more question. Perhaps I hadn’t talked about the braking system. I had definitely forgotten to mention the “lifestyle modules” with which Rolls-Royce can outfit the trunk — special leather-covered cubic storage kits that contain all of the tools necessary for the types of adventuring its clients prefer: falconry, base jumping, drone racing. But none of this seemed to be what was on his mind. He looked down at the carpets. He looked back up at me.

I smiled graciously and stared him in the eye. “No,” I said. “You cannot drive it.”

He went off to class. I switched the Cullinan’s delicate steering-column-mounted shifter down into drive, and went out in search of other, more effortless adventures.