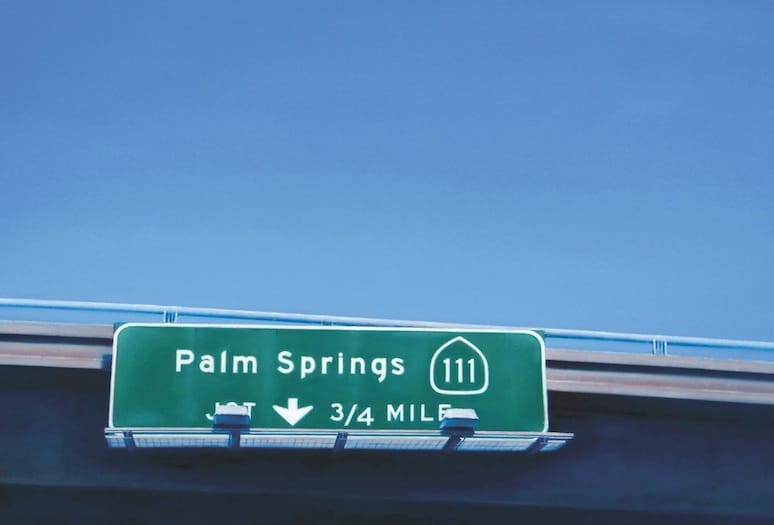 Though born and raised in Illinois, painter Eric Nash always loved the California desert, or at least the idea of it. In 1998 he fell for the real thing: 115 degrees, empty, and endless — the opposite of Chicago. When his panic subsided and the slow, epic Zen set in, he knew he was here to stay.

He and his partner bought a house on a whim. They put down roots in the Los Angeles/Palm Springs art world continuum and moved to Palm Springs full time in 2008. By then, the city was experiencing a renaissance. The vibe became hip, and the contemporary art and modern architecture scenes became part of the social fabric. Although they love the fabulosity, they missed the Wild West of the “old days” and soon began looking for more space and solitude. One day they were in Joshua Tree and they looked on a real estate app and found — then bought — a nearby Atomic Ranch property. They promptly sold their Donald Wexler–designed house in Palm Springs and have been living full time in the High Desert since March 2015.

Nash says he’s “anxious to see where that takes me,” perhaps revealing more of the “hidden conceptual underpinnings and grander visions” already manifesting in his work.

“In the desert, you can make your own world,” Nash says. Sometimes when he speaks about how the aesthetic and psychological isolation of the region inspires him, it’s hard to tell if he’s talking about life or art. “It’s romantic, dangerous, and mysterious. It shifts the scale of your perspective. It forces you to live in the present; it distills experiences into something more clear, more pure somehow.”

He could well be describing his own paintings, which in both pristine realist and gestural impressionistic modes consistently demonstrate a reductive essentialism more like haiku than sonnet.

“I have an array of techniques,” Nash says. “They are matched to the service of specific ideas. I’d hate to be known for only one thing.”

His most recent work, exhibited in September at Santa Monica’s Skidmore Contemporary Art, falls into two divergent but fundamentally related series: crisply rendered, Pop-inflected images of freeway exit and gas station signs, and loosely expressive nighttime vistas sweeping toward light-peppered horizons. “The signs,” he says, “are both stories and places.”

And while the dimly lit landscapes evoke the Los Angeles-centric work of Peter Alexander, they remain mysterious and “in truth they can be anywhere you want them to be.”