The Ron Hicklin Singers were known as the real voices, save for David Cassidy, behind the background vocals on The Partridge Family recordings.
PHOTOGRAPH COURTESY FACEBOOK

For decades, long-time Rancho Mirage resident Ron Hicklin was mostly unseen to the public, even though he made a lasting impact in the entertainment industry.

You know him. But you don’t know him.

Hicklin and his musical group, The Ron Hicklin Singers, were the voices behind iconic pop groups The Monkees, The Partridge Family, Gary Lewis and The Playboys, and others. They also created some of TV’s most memorable theme songs — from Flipper and Batman to Gilligan’s Island and Happy Days — and became the go-to group backing Frank Sinatra, Dean Martin, Sammy Davis, and Elvis Presley. Remarkably, they completed the sound of phenoms like The Beach Boys, The Beatles, Cher, Barbara Streisand, Neil Diamond, Michael Jackson, and Linda Ronstadt, among others.

“Ron Hicklin really is the most famous voice you’ve never heard of,” quips Eric Chiel, a local author and pop-culture enthusiast who met Hicklin by chance at a Coachella Valley Costco — he’d politely asked the entertainer about his career and was pleasantly surprised by the stories that followed. That’s when Chiel decided to create a one-of-a-kind Modernism Week event to offer locals a glimpse of the man behind the music 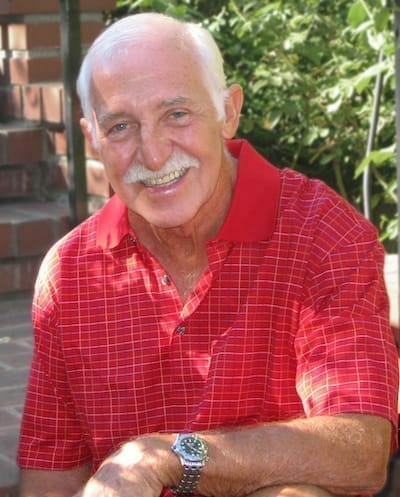 “Ron Hicklin: The Most Famous Voice You’ve Never Heard Of” takes place at 1 p.m. Feb. 23, at the Annenberg Theater in Palm Springs. Chiel will lead a Q&A with Hicklin and attendees can expect a series of untold stories, rare film clips, and Hicklin’s music interwoven throughout. Chiel hopes to uncover the man’s fascinating career and offer context into what he calls, “life soundtracks of two generations.”

“I’d like people to understand the way music is recorded and walk away with a deeper appreciation of Ron’s technical and performance artistry,” Chiel notes.

Hicklin rarely makes public appearances, but he accepted “the challenge” to appear at Modernism Week because he felt the scope of his career was “very unique.”

“I had 13 filing cabinets in my three-car garage full of paperwork, and I thought, someday when I retire, I'll write a book, because whether there would be a book about Elvis Presley or The Monkees or The Partridge Family — or any of these things that I’d done — I'd be in there,” Hicklin says. “That's why I wanted to be at Modernism Week. Not because I like to be on stage — I don't. I want to highlight the No. 1 records I was a part of, play snippets, and talk to people about all that. I think it can be impactful.”

No doubt Hicklin’s career is diverse and incomparable.

The core group’s punchy theme songs — The Jetsons, The Flintstones, That Girl, Love American Style, Laverne & Shirley — may forever remain imbedded in the minds of Baby Boomers. But that he added nuances to film scores such as The Music Man, Rosemary’s Baby, M*A*S*H, and Terms of Endearment is noteworthy. The group also gave birth to the famous McDonald’s ditty “You Deserve a Break Today,” and fueled the popularity of other television commercials. Remember “Kawasaki Lets the Good Times Roll” and “Let Hertz Put You in the Driver’s Seat?” All Hicklin and the gang.

He shined on the solo front, too, singing — wait for it — Alvin the Chipmunk.

After contributing to roughly 100 No. 1 records, The Recording Academy honored Hicklin with its first Best Background Male Vocalist award.

“There have been so many interesting personalities involved with this kind of success,” Hicklin shares. “And challenges, not to mention the sense of humor that went with it. I hope people find this event memorable.”

“I enjoyed the fact that I worked with the kings in the business. And that I really was able to do what I wanted to do — music.”

Originally from Washington state, Hicklin’s father was a high school principal and his mother a teacher. He was the youngest guy in his junior high school musical quartet, a group called The Smooth Papers. “We called ourselves that because we didn't even shave at that point,” he laughs.

Hicklin was the high voice, but when his voice changed, he became lead singer. A television talent contest found the group accepting a two-year contract for an hour-long weekly show on local television. Two years later, when he was a sophomore, the other fellas graduated and “that was the end of that.”

Hicklin went on to study pre-med at the University of Washington, but music was always his big love. He’d eventually return to it and form a group bearing his name with brothers Tom and John Bahler, and Jackie Ward and Gene Morford.

“We got a record with Columbia and were assigned to a seven-year contract to make about three albums,” he says. “Two years into the contract, we realized we really didn’t want to go around the country performing and doing stuff like that. We wanted to just work in the studio. So that's what happened.”

It’s a kick to hear Hicklin share tales backing the likes of Darlene Love, The Temptations, and countless others — just a few tidbits that ought to pique interest during the Modernism Week event — but his humanity really shines through whenever he discusses major career challenges. For example, the group would often not be credited for their work. And revelations about what it was like working for Columbia Pictures on The Monkees, and eventually The Partridge Family, is sobering.

“My heart was a little bit broken in that situation,” Hicklin says, citing behind-the-scenes brouhaha with the studio. “Eventually, I was able to bring in a singing group for The Partridge Family and we did the pilot. The good news was that it got the highest rating of all time outside of Mission Impossible, so the show was a go. But then Columbia Pictures tried to replace me —cut off the head and take whoever is left so they could be more in charge.”

The other singers wouldn't do the show without Hicklin. He would be called back into the fold, but deep down, he says he always felt that the studio “screwed” with his head.

“I went in and did it, but it was like working at the factory,” he recalls. “I did the best I could at all times. I’d done that my entire career. When all that success happened, it wasn't like I wanted to go out and gloat about the fact that we were The Partridge Family. It was just another gig.”

Not to the outside world.

Bernard Slade, who created the series, loosely basing it on real-life musical family The Cowsills of the 1960s, must have seen the bigger picture. I Think I Love You, The Partridge Family’s debut hit, spent three weeks at No.1 on Billboard's Hot 100 in late 1970. It sold more than 5 million copies, surpassing The Beatles' Let It Be at the time. Cassidy, Hicklin et al managed to nab a Grammy nomination for Best New Artist in 1971. Other hits followed — Doesn't Somebody Want to Be Wanted, I'll Meet You Halfway, I Woke Up In Love This Morning, and covers like Breaking Up Is Hard to Do.

In the meantime, the show became a hit and Cassidy a pop icon. “David was huge,” Hicklin says. “And we just kept doing the formula.”

Yet Hicklin’s success was far from formulaic. The man was — and still is — dedicated to the art of making music. “I was ideally suited for the career with the range I had, but outside of the personal aspect, every day I was doing different things, rather than standing on stage singing the same song, like groups like The Temptations,” he says. “I enjoyed the fact that I worked with the kings in the business. And that I really was able to do what I wanted to do — music.”