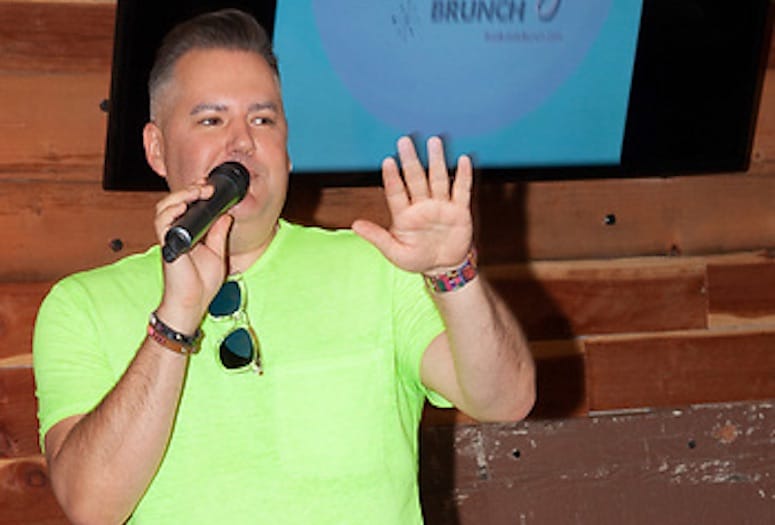 Ross Mathews gets the crowd going during one of his recent drag brunches at Moxie in Palm Springs.
PHOTOGRAPHS BY MARK JOBE

Over 50 years ago, Frank Sinatra and the Rat Pack did something for America’s dining scene that nobody saw coming. The combination of live performances and friends sitting in plush booths mixed well with martinis and steak.

Leave it to innovators within the LGBTQ community — not to mention a sassy drag queen (or several hundred) — to update that idea with what’s known today as “drag brunch.”

Ross Mathews, the always exuberant RuPaul’s Drag Race judge, loved the concept so much that the longtime Palm Springs resident decided to launch his own drag brunch.

“I think of these brunches as if I am curating them,” Mathews says. “I set the menu, I pick the drag queens, and I’m very specific about the tone I want to do. I come every single chance I get.” 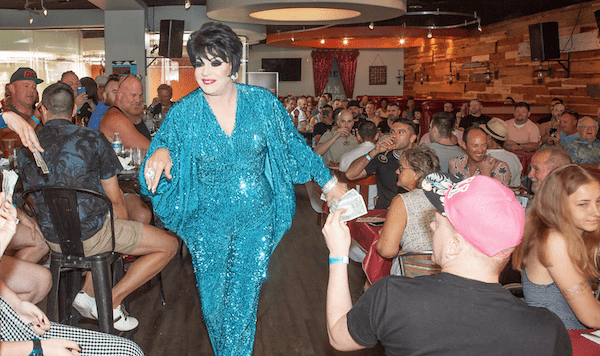 Each show features a range of drag talent from humorous to acrobatic.

The brunch has been such a hit locally that Mathews says he’s launching other DragTastic Bubbly affairs in several new cities across the country.

In the meantime, for those keeping track, Mathews’ love for Palm Springs extends far back. True, he broke up with longtime boyfriend Salvador Camarena in 2018 (they are still good friends), and recently sold his home here, but Mathews has nabbed a new dwelling near the “heart” of the vibrant downtown scene.

"We try to just shut the door on that outside world, and just smile for a few hours," says Ross Mathews about putting on a great drag brunch.

Tell me more about the impetus of launching of your drag brunch.

Well, I love drag queens and I get to be a judge of RuPaul’s Drag Race … and I love brunch. I’ve been to drag brunches before and thought, “Gee, if I were to ever host one, I would do it this way or that way.” My best friend, CJ, told me to get off of my butt and do it. He and I started doing it together. The Rockwell was in, and it was a hit right away.

What’s the secret to putting on a great drag brunch?

How do you juggle your creative side with your business side because you seem to have this entrepreneurial spirit?

I love what I get to do. I love my job. What’s important to me is that it’s all consistent and that there’s quality control. I want people to trust that whatever it is I’m doing that they will get their money’s worth, and they’ll feel good at the end of whatever it is.

What’s your take on the drag scene in Palm Springs?

I love it. There really are some incredible performers here in the Coachella Valley. Initially, we brought some of our favorite queens from LA and who have been on RuPaul’s Drag Race, and others from across the country. Recently, we had Savannah Westbrooke from Chicago. You never know who you’re going to get. We also pride ourselves for having every shape, size, color, and type of queen. We want diversity and to showcase all different types of talent. We’ll have comedy queens, pageant queens, and acrobatic queens. Every show is different.

Yes, but my new home is right in the thick of it.

Always good to be right in the thick of it, I think. 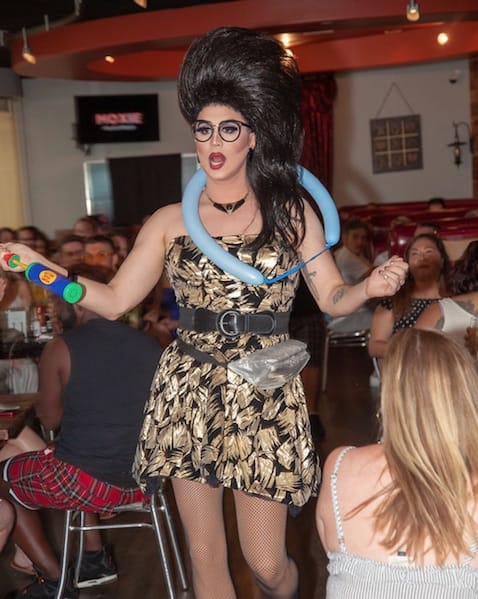 Right? Well, I love being able to turn right and go into a casino, and turn left and go to Hunters [Nightclub], and then go one more block to my brunch at Moxie’s. That’s my fantasy life.

We may have just pinpointed your spiritual GPS. What do you love most about Palm Springs?

The first time I came here back in 2002, I thought, “This is the mothership!” There’s something very special here — mineral waters, warmth. There’s something going on. Additionally, it’s filled with fascinatingly happy people, gay people. It’s the happiest place on earth to me.

I accomplish something. [Laughs]

What has been your most recurring major life challenge?

Not getting so fat. Every day, I try not to get fatter and fatter. [Laughs] It’s a daily struggle. Actually, it’s a meal-by-meal struggle.

I get it. I was an emotional eater.

Yes. I mean, why do they have to make pizza taste so good?

Right? My family lives in Chicago. There’s nothing but carbohydrates there. Not a salad to be found.

Everywhere you look, there’s carbs! I know. I am only one man. And only so strong.

Growing up, who were some of your biggest influences?
Regis Philbin. Rosie O’Donnell. Oprah.

Why Regis?
That’s the job I wanted.

Is there an art to interviewing people?

I can talk for eight hours on that. It really comes down to is being interested. You have make yourself a fan of, or at least well versed in, the person you are interviewing. Otherwise, you won’t ask anything interesting, and you won’t get an answer they haven’t given a million times before. I’ve always interviewed people as if I were a fan sitting down with them at the food court at the mall.

God no. It’s great. Anybody that’s complained about it hasn’t thought about the other side of the coin.

Jay Leno told me to always show up early, stay late, and be nice to everyone. And now, I am going on just about two decades on television as a business. Great advice.

What’s one of the most interesting things you’ve been learning about yourself lately?

Lately? That I feel boundless in terms of what I can do next.

Raise your glass at Ross Mathews’ DragTastic Bubbly Brunch from 11 a.m. to 2 p.m. Sundays at Moxie Palm Springs, 262 S. Palm Canyon Drive in Palm Springs. Keep track of Mathews, drag performers at the brunch, and more, at moxiepalmsprings.com or helloross.com.

What's going on in the desert in July. Here are 20 things to do to get started.