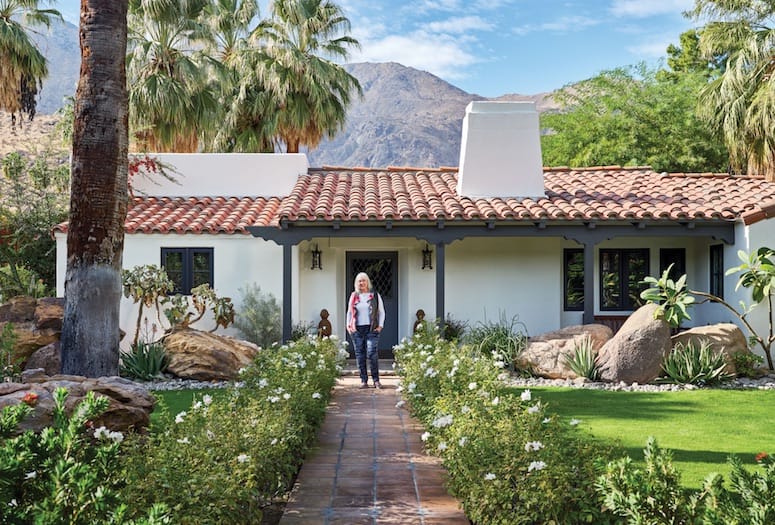 Roswitha Kima Smale at the entry to her home, from which the boulder-accented garden wraps around 360-degrees.
PHOTOGRAPHS BY MILLICENT HARVEY / STYLING BY MICHAEL WALTERS

As our lives unfold in seasons, so do our homes. In 2014, Roswitha Kima Smale recruited a notable interior designer to turn her Spanish Colonial property into a warm haven layered with international antiques and one-of-a-kind treasures. Yet she needed more time to rethink the garden.

Between travel, involvement with the Palm Springs Art Museum and Desert X, and helping to preserve historic structures and save cheetahs in the wild, other priorities came first. She had reached out to landscape professionals, but their proposals for building gazebos and moving trees befuddled her. Each struck an off-key chord to the classic 1930s architecture and her preference for less contrived and exacting environments. Smale found her home encouraged a daily journey of exploration; shouldn’t the exterior do the same?

A deep affection for the African wilderness was the tie that bonded her to Gino Dreese and Troy Williams, who eventually lavished the Old Las Palmas garden with a level of attention on par with the indoor spaces. Dreese is from Amsterdam, and the pair’s excursions to foreign lands influence their landscape designs.

“When we met, they owned a fabulous place up in the High Desert called Mojave Rock Ranch,” Smale says. “They named their company after it. I visited during a High Desert tour, and it was the most fun and extraordinary place I have seen. I was blown away by the creativity, ingenuity, and whimsy.” When she saw them at a dinner party, Smale invited them to picnic in her garden.

Thus began the initial inklings and informal meetings that would change her garden and, without hyperbole, her life. Her morning stroll, now a beloved ritual with cup of coffee in hand, where she greets the wildlife and marvels at new blossoms on the plants, grew from a seed that was planted on that first, very casual visit.

“I had complete trust in Troy and Gino’s creative vision,” she says. “And it evolved as got to know each other. I didn’t have to know at the beginning what it was going to be like at the end.”
The parcel, set across almost an acre, was ready and willing. Past the gate off the street, the yard has long unfurled like a green cape, wrapping widely around the home in a park-like setting. It had been waiting, and in some cases, withering, behind the ficus hedge for six years. A small pond, the sole feature amid “a totally boring monoculture of grass,” as Williams describes it, languished in one corner. 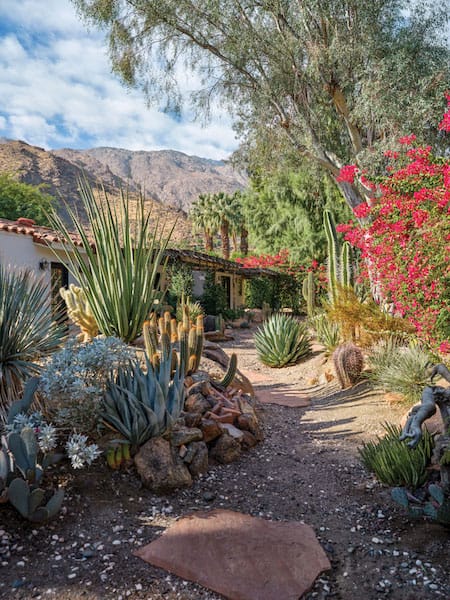 The designers created a transportive setting
where African plants thrive. 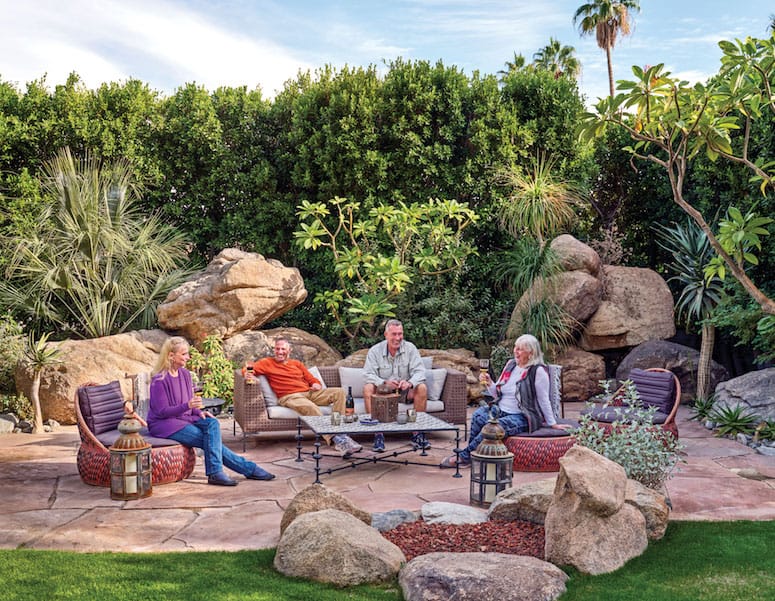 Landscape designers Gino Dreese and Troy Williams raise a toast to friendship with Smale (right) and Smale’s niece, Bronwyn Wallace (left) in a favorite corner of the garden. At dusk, Smale lights the lanterns and the boulder-encircled fire pit in the foreground. “They understood what I am passionate about and brought that to life,” she says.

Smale hadn’t known she longed to see boulders out every window, but rocks have always beguiled her. “Rocks to me have power,” she says. “They are the raw beauty nature has created, unadulterated by the human hand. I always would bring back a little rock from my travels.” And she too has traveled the world.

The job of giving each area of the estate its own purpose called for strong, sizeable elements. Only boulders hand-selected from Whitewater Rock & Supply Co. would add the texture, dimension, and ancient sense of import the designers envisioned. From day to night, for morning strolls to fundraisers hosting 100 people or more, enclaves drawn with boulders provide specific functions inside the meandering nature of the overall design.

“Our whole idea was to make it look like they’ve rolled down the mountain and just kind of settled on the property and then the house was built around it,” Williams says. Imagine 82 rolling boulders slowing to a perfect stop, forming areas for conversation and reflection.

• READ NEXT: View the Digital Edition of Home & Design February 2021.

Some weighing up to 7 tons — enough to tip a crane — dangled in mid-air while the men guided them into place, the crane operator trusting them blindly from behind the tall hedge. Boulders require experience, and the pair has worked with the crew at Whitewater for about 20 years out of their 35-year career together.

Their idea of a “fluid, creative process” might seem unusual. After cherry-picking some of the most distinctive rocks others have passed on, they mark the top and the side that shows best. They are already visualizing the elephantine stones dropping into the landscape. 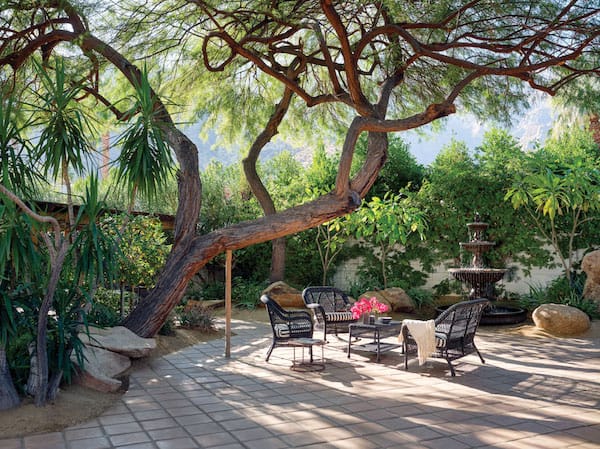 Under the dappled shade of a twisting Mesquite tree, a seating area sits just out of splash from the courtyard fountain. 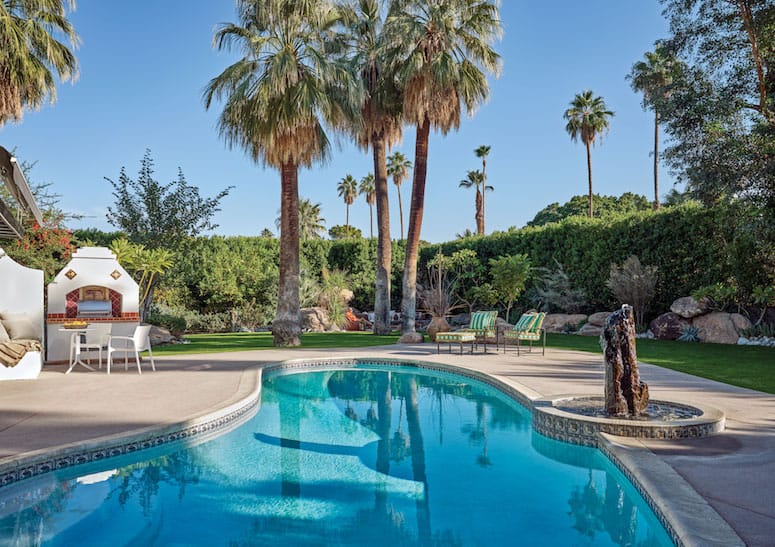 Even the pool deck and its environs received the designers’ touch, in keeping with the Spanish Colonial aesthetic.

Those choices might change when they need to quickly fit these “silent sentinels of history,” as Smale calls them, on site.

Around the boulders are desert plants native to another continent. “Our concept was California Spanish style meets luxurious African lodge,” Williams says. “In our favorite corner of the yard, it is like you’re sitting on the outskirts of Nairobi on some fabulous property that is manicured but not over the top. We all wanted a beautiful but natural setting.”

Rocks encircle a ground-level firepit and edge up to a living archway of firethorn winking with red berries. They tilt on end, balance atop one another, and lean into the next, often leaving space for plantings to rise behind them or poke their spiny limbs between.

Aesthetics aside, a byproduct of the boulders is the microclimates they produce. “The same plant might be able to live on one side of the boulder but not on the other,” Williams explains. “You need to know not only how to plant them, but also how to have them thrive in the future, with the climate changing so fast. Every summer, things that were fine the year before are just gone.” You can’t blame the gardener or lack of water if the plants are cooking from the top, he cautions. 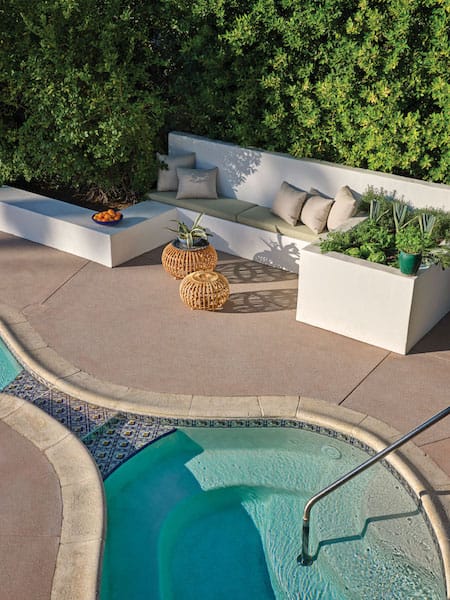 Encompassing the barbeque, to the modern seating cradled by the perimeter hedge, and all the lush foliage in between, every purposeful aspect of the new landscape is in harmony to the others. 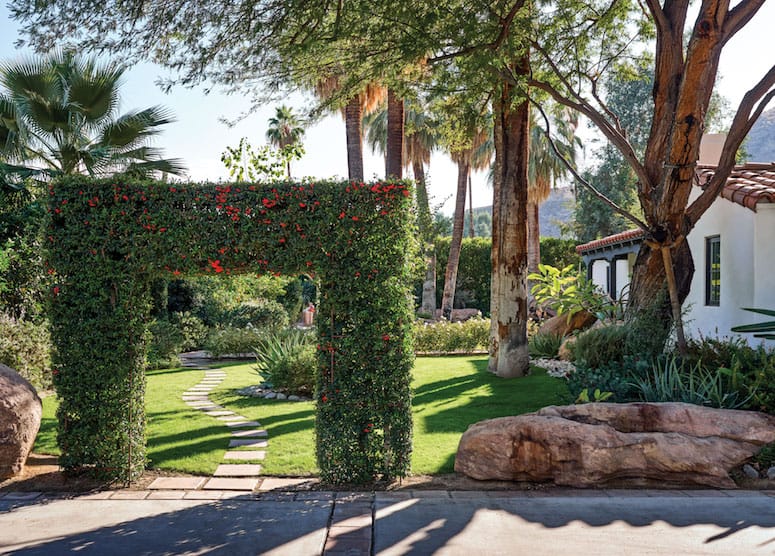 A tiled path off the driveway begins under the arbor and seems to tiptoe lightly across the lawn. Boulders nudge in on each side of this grand arch.

Birds and wildlife, to Smale’s delight, have been instinctively attracted to new habitats around the boulders. Smale has counted 13 species of birds, including a Cooper’s Hawk she spoke with many days as he perched on the edge of a fountain.

While no section has been left untouched, very little appears touched. Mature specimens dating to the home’s construction 90 years ago flourish amongst fresh plantings, the old indistinguishable from the new.

A monolithic rock fountain bubbles beside the pool; another fountain splashes water softly down four tiers in a courtyard between the house and casita. Reading, resting, sitting down to lunch, or laughing with a cherished friend all have a place here. As the forecast permits, the garden and its enclaves prove livable for every waking — and blissfully napping — hour.

When the trio completed the landscape, they packed their bags last March and headed for remote regions of the destination that had bonded and inspired them. Though travel complications due to the pandemic detained them in Africa for 11 days beyond their planned departure, the delay gave the designers more time to study rock formations while Smale studied animal communication. 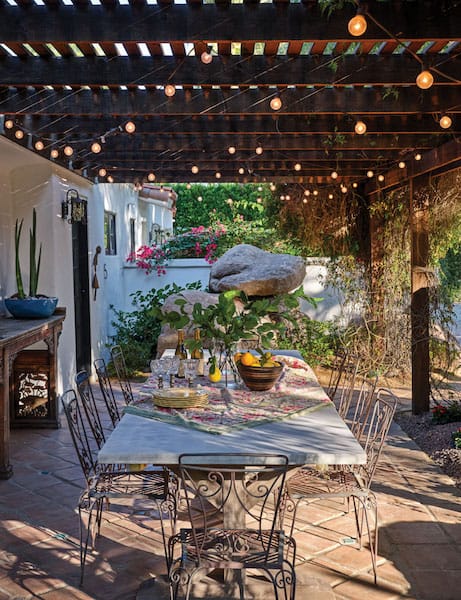 When entertaining outdoors, Smale favors dining with friends under the twinkling lights of the pergola. She may be celebrating again soon if the home receives a Class 1 historic designation.

They all savored a few extra days to reflect on the oasis they had created back in Palm Springs.

“It’s pretty to look at, sure,” Smale says. “But I feel so good on this property. Bringing in the boulders made an amazing change. Each one of them contains this very interesting energy and history. As it turns out, my husband was a geologist. He would have absolutely loved this. I like to speculate that maybe he had a hand in this, too.”

• READ NEXT: Fireplaces Change the Vibe In Your Home.