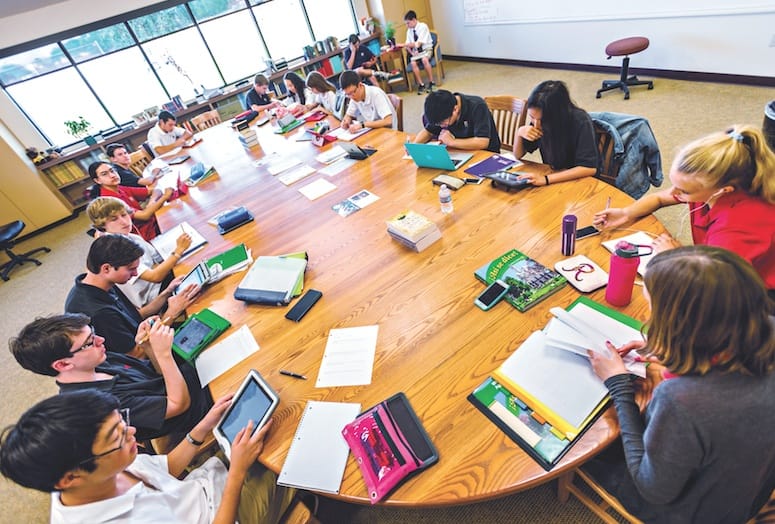 In a spacious classroom on the sun-drenched desert campus of Coachella Valley’s renowned Palm Valley School, a diverse group of students gather around a large oval table.

Teacher Susie Zachik sits among them. The students are quiet and focused, typing into laptops and highlighting passages in books. Nobody is snoozing. Nobody stands at the front of the classroom acting as the homework police.

This is quite different from the environment many of us remember from high school, but chances are, we weren’t educated using the Harkness Method.

The work surface is called a Harkness Table, named for philanthropist Edward Harkness, who in 1930 challenged Phillips Exeter Academy to explore innovative ways of learning. This method — with pedagogical and historical roots in the Socratic system of ancient Greece — aims to make class discussions more invigorating and challenging. The table is figuratively and literally at the center of this ancient educational model. In other words, it makes being smart more fun.

According to student Chloe Sweeney, introducing ideas for discussion is more challenging than a “teacher telling you what to think.” It forces you to be more accountable to yourself and to your peers. “Everyone has to participate,” she notes. “It prevents you from not paying attention.”

Holden Hartle nods in agreement. “You get to be more engaged,” he says. Jordan King is one of many PVS students who benefit from the Socratic method of learning encouraged by the Harkness table.

There’s no sense of “working for the grade,” or finding the single right answer that only a teacher can impart. Each student is responsible for his or her education. No slumping into a chair in the back row, hoping to avoid the teacher’s eye.

Several of the students have just finished reading Lord of the Flies. Student groups of two were assigned particular themes to explore and present to the group. Jordan King says he appreciates the Harkness Method because “the focus is more on the student’s individual idea about a book. It’s not a lecture.” Just as everyone is responsible, everyone is included; because this method requires greater intellectual engagement, students are asked to rise to the challenge.

The Upper School at PVS transitioned to the Harkness Method in the humanities a year ago (foreign language and math classrooms are still organized in the traditional format). Robert Graves, headmaster at PVS, believes the shift to Harkness has met with an overwhelmingly positive response because it builds on the preexisting culture of the community.

“The focus is more on the student’s individual idea about a book. It’s not a lecture.” — Jordan King

“Palm Valley School students have always had a history of engagement with each other and their teachers both inside and outside of the classroom,” he says. “Harkness Tables work wonderfully in an educational climate where everyone is engaged in the work or topic at hand.”

The method is also a welcome change for teachers. Although Harkness Tables originated in a time before high-speed communication, Zachik, who has been teaching English at PVS for 19 years, believes “this old method supports the new technology. The teacher is not the one with the only answer.” Rather than being “in charge,” the teacher is a facilitator of the conversation, allowing students to build on the thoughts and opinions of one another.

The Harkness system mirrors, in some sense, the diverse information sources made possible by technology that even Socrates or Edward Harkness could never have imagined. It also has real world applications for graduate study in the humanities, as well as for any profession in which creativity, critical thinking, and intellectual confidence are necessities.

Graves peeks into the classroom just before the period is over, greeting many of the students by name. As we walk down the hallway, he points out a wall plaque that lists prestigious colleges and universities to which PVS students have been accepted: UC Berkeley, Rice University, Macalester College, and many other schools known for rigorous academics. “Well-run Harkness Table discussions,”

Graves explains, “involve everyone in the discussion with no one person or persons — including the teacher — dominating. As a result, more viewpoints and perspectives are heard than in a regular classroom environment, a rarity in the typical high school ‘chairs in a row’ format.”

Parents, too, support this shift in instructional methods. As one so aptly described it, “I thought I would spend most of my career leading people from the front of the room. Instead, I find the majority of my time is spent around a table meeting and discussing various strategies with others. I wish I had had the Harkness Table training.’”