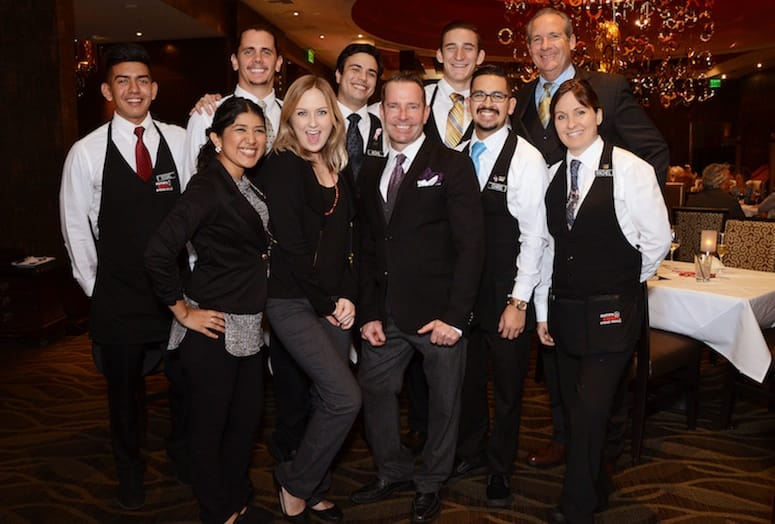 From the photos on the wall to the rich mixture of colors, Ruth’s Chris Steakhouse’s newly remodeled dining room at its Palm Desert location puts out a warm welcome to both regular and new customers.

“We wanted it to be modern with a tie to the community,” says Dale Brandsberg, general manager of Ruth’s Chris in Palm Desert. “It’s retro, it’s new, and it has a warmth that everyone can appreciate.”

The new look was unveiled as the company marked the 50th anniversary of its signature sizzling steaks. The dining area's dramatic skylight, a fixture since Ruth's Chris moved to the Palm Desert location in 2001, has been repainted in soothing desert sunset colors. A new mod chandelier has been added with hanging gold ringlets, bringing the center of the room alive. Pictures dot the walls featuring the home of the desert's favorite icon, Barry Manilow.

“We opened up the dining room so people on both sides of the restaurant can see each other,” says Ruth's Chris Steakhouse Sales Manager Anita Owens-Decur of the spacious new room.

“Our wine dinners focus not only our wines but our food, and the various items that we have available for people to have at their own party,” says Brandsberg.

On the menu, Ruth's Chris is matching its new look with food offerings that speak to its history and customers' tastes including bone-in steaks from the New York to the 40-ounce Tomahawk Ribeye with a 12-to-14-inch bone. Customers can feast on a new Seafood Tower (large or small) bursting with a hearty selection of Alaskan King Crab legs, Maine lobster, jumbo shrimp and more.

Ruth’s Chris has made dramatic strides in its catering services from Home Chef Dinners to on-site presence at major events like Coachella Music Festival & Stage, Stagecoach and the La Quinta Arts Festival. The result has rewarded the Palm Desert location with top awards across the entire company. Ruth's Chris Steakhouse has been at its Palm Desert location since 2001. Customers applaud during the special event to mark the new look at Ruth's Chris Steakhouse in Palm Desert.