Did you know there are active volcanoes at the Salton Sea? Five small lava domes along the southeastern edge of the sea are fueled by geothermic activity below the surface. Though the last explosive eruption occurred approximately 1,800 years ago, the volcanic areas still contain boiling mud pots, where hot muck bubbles on ground level. You can look, but don’t touch. usgs.gov/volcanoes/salton-buttes

Named for the concrete slabs left behind after a World War II training camp was demolished, this off-grid community — dubbed “the last free place in America” — brims with offbeat art and ideas. If you go, check out the East Jesus neighborhood and the Slab City hot spring, which you’ll find along the side of the road. eastjesus.org

Strewn with detritus from decades past, the abandoned shores of the Salton Sea have become a canvas for installation artists. Much of the art is located at Bombay Beach (including a swing installed in the water), thanks in large part to the Bombay Beach Biennale, established in 2015. bombaybeach biennale.org 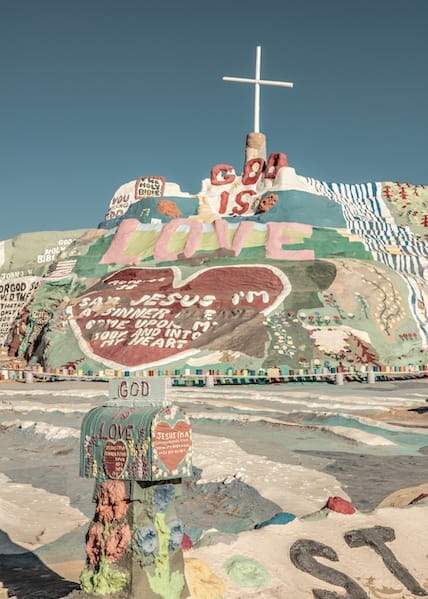 Designed by acclaimed modernist architect Albert Frey in 1959, this historic site was intended to be a luxury members-only gathering place for the swanky seaside resort town that never was. The clubhouse shuttered in the ’80s but was restored and reopened in 2010. Today, it serves as a community center. myrecreation district.com

They say faith can move mountains. Turns out, it can also build them. Colorful, bold, and in-your-face, this 50-foot-high, 150-foot-wide rainbow hillside was crafted over three decades by late evangelist Leonard Knight using adobe clay, straw, and more than 100,000 gallons of paint. Climb it, wander through its tunnels, and marvel at one man’s devotion to God’s love. salvation mountaininc.org

• READ NEXT: Side Trips: Head Up to Idyllwild.