The Future of the Salton Sea Has Funding Ready to Deploy 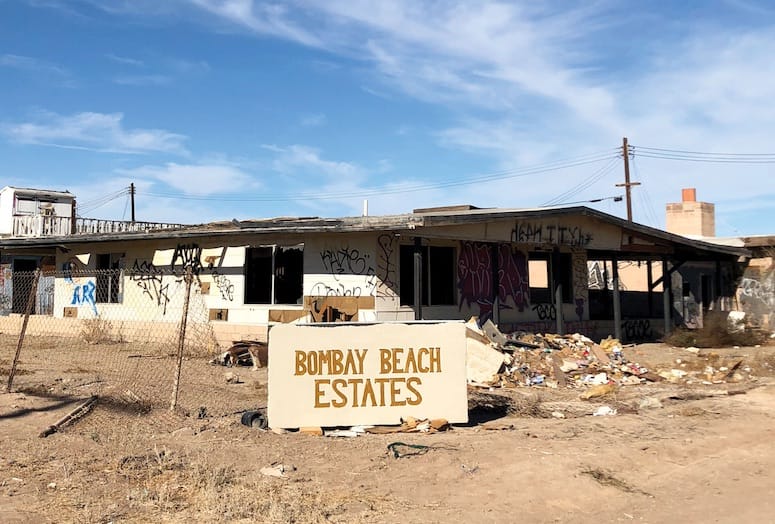 It’s easy to imagine the eastern shoreline of the Salton Sea, with its postcard-perfect backdrop of the far Santa Rosas, lined with luxury resorts, million-dollar homes, yacht clubs, and bustling cantinas — and, as some education proponents suggest, a state university with programs in environmental science, nutrition economics, and leading-edge technologies.

That was the vision in 1929, when Bombay Beach was incorporated, and a version of this dream came true, at least for a short while, in the 1950s and ’60s. Tourists would travel from Los Angeles for weekends of boat races, water skiing, and sport fishing and to see celebrities such as Sonny Bono, the Beach Boys, Frank Sinatra, and the Marx Brothers having fun in the sun.

But the sea’s increasing salinity and a pair of devastating tropical storms, in 1976 and ’77, washed away the marina and filled the tiny town — the lowest community in the United States, at 223 feet below sea level — like a bathtub.

Forty years later, trailers and houses along the shore continue decaying in the mud, and other small communities along the sea — North Shore, Salton City, Salton Sea Beach, Desert Shores — live on in relative anonymity and with a post-apocalyptic air.

• READ NEXT: The Desert We Want Stories Start Here.

As the sea evaporates and more shoreline becomes exposed, the risk increases for alkaline dust clouds to blow into the Coachella Valley and threaten environmental health and tourism. Meanwhile, it’s common to see local children walking around with inhalers to curb asthma symptoms.

A 2003 transfer agreement cut off the water that once flowed into the lake with irrigation runoff. The deal called for mitigation water at the sea through 2017 and a restoration plan to abate the salinity and its toxic aftermath. In 2018, 11 different plans were presented to import water from the Sea of Cortez or the Pacific Ocean to decrease salinity and reverse water losses.

At press time, more than two years after these plans were submitted, the California Natural Resources Agency had not hired an analyst to study them and make recommendations. (They have a 2022 deadline to present a solution.) And, in September, at the first Congressional hearing on Salton Sea in 23 years, the issue proved partisan: California Democrats called for greater federal assistance while only one Republican showed up to the subcommittee meeting to discuss it.

“The Salton Sea, if restored and designed effectively, can drive tourism for soft adventure and certainly artistic opportunities,” says Scott White of the CVB. “It could be one of the most unique places in the world and it could be substantial benefit for our valley.

“We conducted two studies based on doing nothing and full restoration,” he adds. “The economic impact based on full recovery is staggering: It could generate over $5 billion for our valley.”

Riverside County Supervisor V. Manuel Perez, whose district includes the Coachella Valley, says there’s a recommitment to the sea from the state, noting tens of millions of dollars in funding survived COVID-19-related budget cuts. Some of the funding supports 10 new positions to implement dust suppression and habitat restoration, which begins this fall.