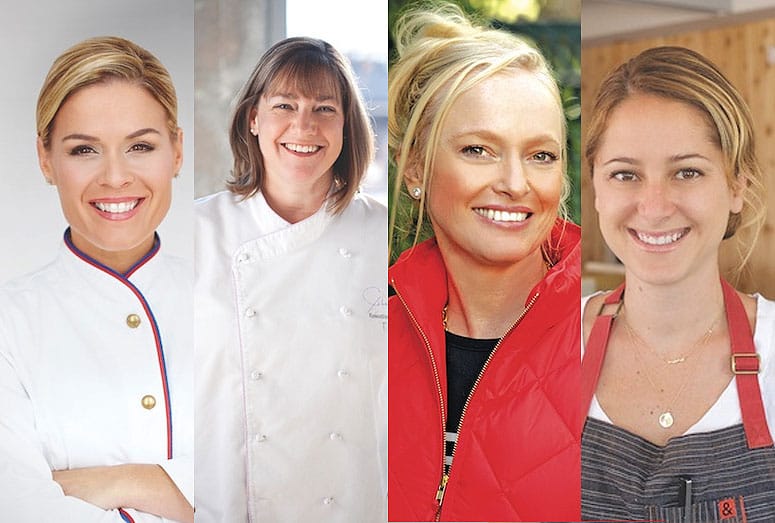 Chef: Cat Cora
Background: First female Iron Chef, member of the Culinary Hall of Fame, founder and president of Chefs for Humanity, wife, and mother of four.
Current Restaurants: Ocean by Cat Cora (at Resorts World Sentosa in Singapore); Cat Cora’s Kitchen (at the San Francisco, Salt Lake City, and Houston airports); and a gourmet market in Salt Lake City.
Future Projects: A memoir with Scribner coming out this year and a new Cat Cora’s Kitchen in the Atlanta airport also opening this year. She is also working on some exciting new TV concepts both behind and in front of the camera.
Couldn't Live Without: “Hardest question you can ask a chef! Some good barbecue, although Santa Barbara, where I live, also has some incredible sushi.”
Award-Winning Specialty: “Basque-Rubbed Lamb Chops topped with my signature chimichurri sauce to make it spicy, sexy, and delicious.” Chef: Lulu Powers
Background: One of six children, she grew up with parents who were passionate about cooking. Best-selling author, entertainer, and event designer. Her client list includes Madonna, President Clinton, and Arianna Huffington, among others.
Current Restaurants: “Most of the catering events we do are exclusive. I just did an après-ski party where we made the whole front yard into a winter wonderland with snow.”
Future Projects: “Keep your eye out for On the Road With the Entertainologist, Lulu Powers.”
Couldn't Live Without: “Avocado toast. I love how simple it is and how you can change the toppings to suit your mood. Topping it with truffle salt, cashew cheese, stracciatella, or even a fried egg for breakfast.”
Award-Winning Specialty: “I love serving my Herb Marinated Lamp Lollipops as a passed appetizer. They are a huge hit at parties. The recipe is in my book, Lulu Powers Food to Flowers.” Chef: Brooke Williamson
Background: Honored by the Los Angeles Times and Forbes as a culinary mastermind, she is the youngest woman ever to cook at the James Beard house. She’s a host and mentor on MTV’s first foodie series, House of Food.
Current Restaurants: Hudson House in Redondo Beach; The Tripel and Playa Provisions — a four-in-one concept that includes an ice cream shop, a café, a whiskey bar, and a high-end seafood restaurant — in Playa Del Rey.
Future Projects: Opening a retail space behind The Tripel, selling custom top-tier culinary supplies and staples such as handmade cutting boards by chef-husband Nick Roberts.
Couldn't Live Without: “Pho or Ramen, plain croissants, or really, really good dark chocolate.”
Award-Winning Specialty: “Brown Sugar Pork Ribs (at the Hudson House), The Tripel Burger (at The Tripel), and Lobster Roll and Breakfast Sandwich (at Playa Provisions).”