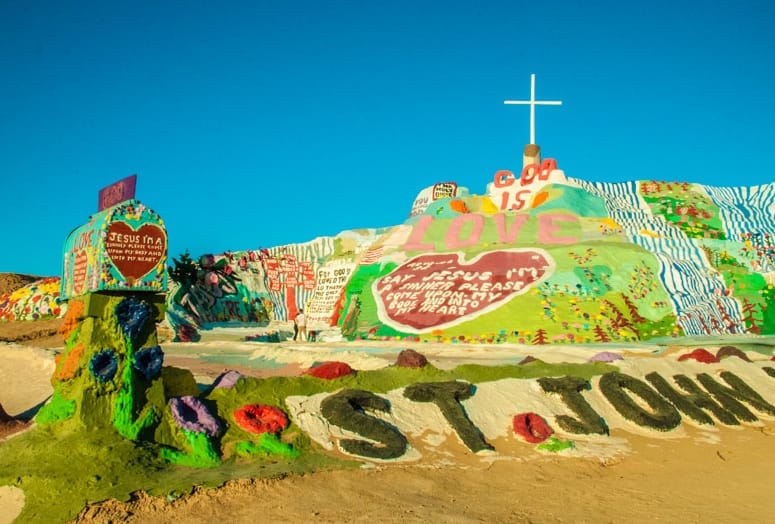 “God is Love” is one powerful statement visible from high atop the colorful palette called Salvation Mountain.

Located in a squatter’s village called “Slab City”, inside the town of Niland, the area is still alive with tourists, artists, and souls looking for a higher purpose.

Knight’s recent death at 82 years old this past February signified a passing of his torch to those devotees that still remain. Signs asking visitors if they “got paint” are placed at the entrance. Campers, trucks, and a make shift empty “Welcome” center are strewn across the government-owned property. Immortalized in the 2007 Sean Penn film, Into The Wild, Knight played himself in a small cameo piece. Documentaries have been made and a photo of Salvation Mountain graces the cover of the book. Self Made Worlds: Visionary Folk Art Environments.

Originally from New England, Knight’s truck was dismantled and put on display at a museum in Baltimore.

Spending more than three decades of his life creating Salvation Mountain, thousands of donated gallons of paint rest upon adobe and straw.

“Love Jesus and keep it simple” was Knight’s philosophy, which is apparent in the biblical verses that repeat everywhere on the site of his life’s visionary art installation piece. Knight may be gone, but his legacy lives on for all to continue to experience.

Directions to Salvation Mountain: Take Interstate 10 east to Route 86 south toward the Salton Sea. Turn left on Route 195, then right onto 111 South (Grapefruit Boulevard). Take Grapefruit Boulevard down to Niland and take a left onto Main Street leading straight to the destination. From Palm Springs, it’s about a 90-minute drive.