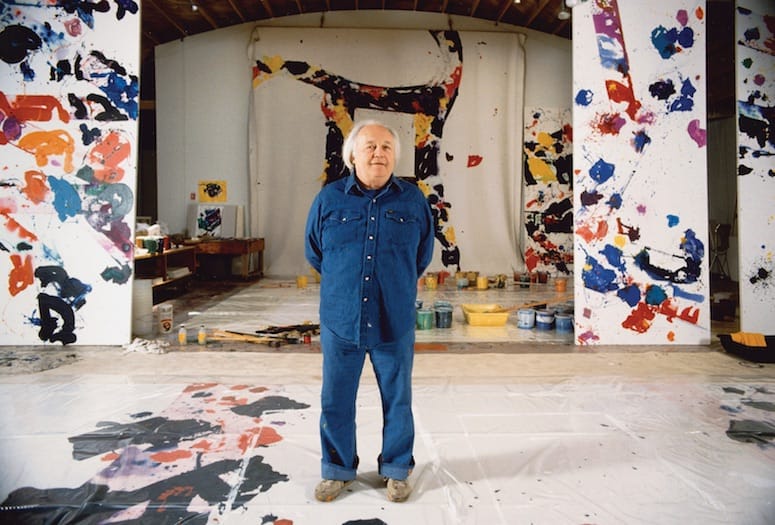 Sam Francis, shown in his Los Angeles studio in 1982 with A Whirling Square, was dubbed “the hottest American painter in Paris” by Time magazine in 1956 for introducing his exciting, colorful style of abstraction.
PHOTOGRAPH BY MICHAEL CHILDERS

Two stories tall and almost 18 feet wide, A Whirling Square consumes you in a way that few paintings can. The sheer scale and audacity of bright red, yellow, violet, and green drips and splatters across a pale-white canvas arrest you in awe. This is how Sam Francis liked to express infinity: painting in monumental scale and commanding the entirety of your peripheral vision.

This particular canvas, which has been exhibited only twice — at Nicholas Wilder Gallery in Los Angeles in 1975, the year it was painted, and at Centre Régional d’Art Contemporain Midi-Pyrénées in Toulouse, France, from 1991 to ’92 — has been out of sight for more than 20 years. Francis had given the massive painting to his daughter, Kayo Malik, who kept it in storage after the artist died of prostate cancer in 1994.

“It’s a very special painting, a gift from my father,” says Malik, an acupuncturist who splits her time between Sedona and Maui. “I had a choice of which painting I wanted. I didn’t think about how big it was, and I don’t live in a house big enough to hang it, nor do I desire to live in a place that could.”

She chose the painting because it holds memories of when she was building a relationship with her father in Santa Monica. Malik had been living with her mother in Switzerland before joining Francis in California from 1978 to ’81. “I was getting to know my dad, and it [A Whirling Square] was a presence at that time. The painting was always around my dad, whether hanging at his studio, his home, or at the Litho Shop on Broadway.” (Francis was a prolific printmaker and in 1964 established his own lithography studio in Santa Monica.)

“One of the things I vividly remember was that he’d paint in the middle of the night. I would come home at midnight or 2 a.m., and the light would be on in the studio,” she shares. “He’d play the music loud, often jazz. I didn’t see him paint A Whirling Square, but I saw him painting in the presence of it. It’s one of those memories burned in my mind. Later on, when I was allowed to choose a painting, of course I thought of the Whirling Square.”

So this painting’s status as the centerpiece of the exhibition Sam Francis: From Dawn to Dusk, which continues through April 29 at Heather James Fine Art in Palm Desert, feels bittersweet. On one hand, the show offers the public a rare opportunity to stand in front of the mural-size painting and see more than 25 of his canvases, works on paper, monotypes, and lithographs dating from 1955 to 1994. On the other, a collector will likely buy her prized possession.

“I’m super excited it is being given a new life,” Malik says. “It needs to be seen, it needs to be appreciated, and it needs a home.” 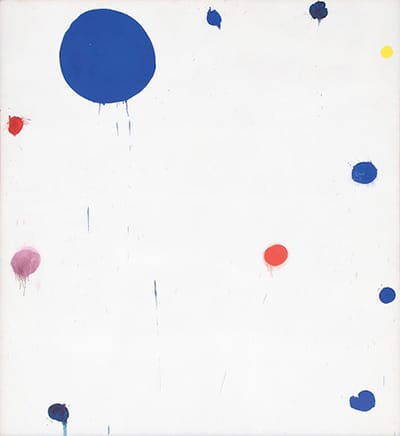 Feeling blue while hospitalized in 1961, Sam Francis started a series of Blue Balls paintings like this one at Heather James Fine Art. 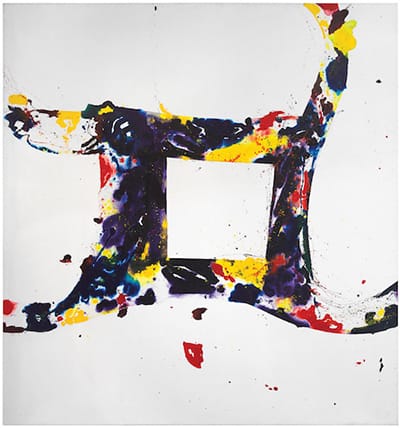 A Whirling Square consumes a two-story wall inside the Palm Desert gallery.

Francis, who was born in 1923 in San Mateo, started making art as part of his therapy while he was hospitalized for spinal tuberculosis during World War II. In less than a decade, he would be hailed as a celebrity in Paris for introducing an exciting, modern idea to the city, and eventually he would win international acclaim for his bright, colorful abstractions, which have been described as colored spaetzle, platelets, and protozoa.

By all accounts, the colors and the way he flung them around reflect the artist’s optimistic character. The paintings are “not angst-ridden, but much more calculated, more nuanced with thin, veiled layers of color,” says Debra Burchett-Lere, president and executive director of the Sam Francis Foundation, who started working with the artist in the 1970s and collaborated on the exhibition at Heather James Fine Art. “He liked the feeling of the fluidity, always looking for his paintings to have a watercolor feeling to them, even though he was working in oil.”

Berkeley-educated Francis left Paris, traveled to Asia, and in 1962 finally settled in Santa Monica. Following a sojourn to Japan in the late 1950s, Francis’ work began to reflect Zen ideas, but his signature is the field of white (actually multiple layers of gesso) that appears as background on his paintings. He saw this space as a portal to the sublime, a place where, as Burchett-Lere suggests, we can “engage at many levels — philosophically, emotionally.” In the most extreme examples, Francis leaves almost the entire center of the canvas white, restricting the color to the edges, where it creates a kind of frame.

In the United States, he became associated with the second generation of abstract expressionists, which included Joan Mitchell, Morris Louis, and Helen Frankenthaler. Francis admired Jackson Pollock’s strength and gestures but felt more akin to Mark Rothko. “The illusion [Francis created] had a different feeling than Pollock,” Burchett-Lere says. “He was more aligned with the process of Rothko. Sam was always looking for the most intense color: the perfect red, the most brilliant blue. For him, color was power, a life force.”

When he was hospitalized in 1961 for a recurrence of tuberculosis, he began to favor blue. Over almost a year he created hundreds of small works on paper, a series he called Blue Balls, one of which hangs in the exhibition at Heather James Fine Art. “He had to paint through periods of illness and pain,” Burchett-Lere says. “In his later works there’s always some element of the spine. That was a daily struggle for him.”

Nevertheless, Francis was unwavering in his exploration of space and color. “He was constantly creating images in his mind,” Burchett-Lere explains. “He said he had so many images, he could never paint them all. When he was working, he’d go to the studio every day and work on 10, 20, 30 paintings at one time. Sometimes I’d be sitting at my desk and he would be pondering an idea with his scratchpad. He’d be writing a to-do list, sometimes a great aphorism, or beautiful poem.”

for the most  intense color:

the perfect red, the most

brilliant blue. For him,

color was power, a life force.”

Malik recalls how her father relished the opportunity to recite his poetry. Some of his words loom large amid the paintings in the exhibition at Heather James. “I love how the gallery put the poetry on the walls,” she says.

“He was not the kind of guy to hang out at Cedar [Tavern],” Burchett-Lere says, referring to the Greenwich Village bar that was popular with New York’s avant-garde artists and writers. Francis spent little time in New York. “He was more interested in the Parisian cafés, and he liked being with authors. He was well-read on so many subjects. He could talk about anything.”

But it’s Francis’ common ground of humanity that people still relate to, Burchett-Lere says. “There’s something about his paintings that invites you in to have a dialog with them. What’s fascinating is when you pair a large painting like A Whirling Square with a small one, and both have an equal intensity of feeling and involvement. They hold up to each other.”

Ultimately, Francis’ paintings are about the sublime, and that’s what continues to capture his viewers’ imagination.