If modern man is forced to walk on flat asphalt and concrete floors, … estranged from man’s age-old relationship and contact to earth, a crucial part of man withers and dies. This has catastrophic consequences for the soul, the equilibrium, the well-being and the health of man. Man forgets how to experience things.

A mere quarter-mile from my car in the Indian Canyons parking lot, a gray fox and I surprised each other. I won the staring contest when he beat a retreat into brush at the base of the rocky outcrop I had just rounded. But true honor came from experiencing my first encounter with a fox after 30 years of local hiking.

You never know what you might discover — a point reinforced when I hiked at the other end of the Coachella Valley two days later and spied a roadrunner on the hillside trail before me. Sure, I’ve seen crowned cuckoos in the desert, but not aloft. As I approached, this wing-challenged bird dove to a remote Quarry golf green — and immediately skedaddled as though I might dive in pursuit, a prospect I was unlikely to attempt (after all, The Quarry is private property).

A few minutes later, I startled a jackrabbit. One second she was on the edge of the trail and the next on the perimeter of another golf green, where she froze — perhaps thinking I would mistake her for statuary and continue on my merry way.

On both hikes, west and east, I saw lizards (ranging from the measure of one of my fingers to the length of one of my hiking boots) and chipmunk-looking white-tailed antelope (ground) squirrels. Bighorn sheep often are spied in the hills above La Quinta. And in the higher realm of San Jacinto, I’ve seen coyotes, mule deer, and even a golden eagle. 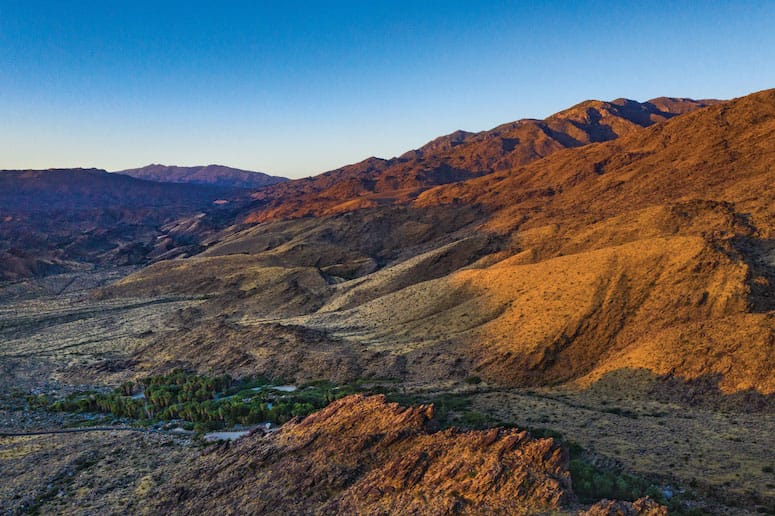 People hike for exercise and fresh air or to get away from the urban/suburban environment. But there is a greater reason to occasionally abandon flat ground: to get in touch with earth and remind ourselves that we are mere bundles of atoms in the grand scope of the universe.

Humans like to think of themselves as masters of Earth. Granted, we impact it — wildlife habitat loss and climate change being proof. But we think that the sky is falling when things go awry in our personal lives. In truth, our problems do not worry the gray fox, roadrunner, jackrabbit, et al. And the desert and mountains themselves stand steadfast. If you doubt it, hike on Santa Rosa and San Jacinto National Monument trails. Drink in the variety of fauna and flora that thrive even in dry washes and on rocky escarpments. Consider that the granite, metasedimentary rocks, and grains of diorite quartz and feldspar in alluvial washes date back as far as hundreds of millions of years ago.

No one can or should ignore the challenges currently facing humanity. But no one can or should disregard Mother Nature’s consistent message. Her dulcet voice prevails over the cacophony of screaming dialogue and roaring engines that homo sapiens inject into their immediate spheres.
Twenty years old this year, the Santa Rosa and San Jacinto Mountains National Monument grants us opportunities to partake in a dazzling array of experiences. Networks of trails allow hikers to be enfolded within the arms of Mother Nature or to take in her splendor across a brainwave-altering expanse of grandeur. Following are three starting points to set you on your way. 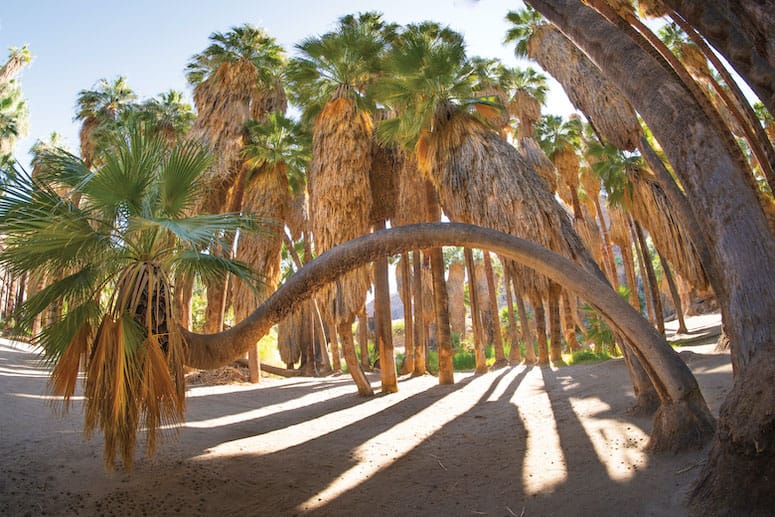 Most views of Southern California’s limbless icons send your gaze upward. But the Indian Canyons parking lot overlooks a beguiling oasis of palms. Walk down among them. Stand on beach-like sand and let susurrus breezes through frond umbrellas and skirts quiet your mind.

As you snake through the wash of Palm Canyon and its fork trails, you won’t notice that you are gaining elevation — until you come to occasional rocks that need to be scaled to reach the “next level.” Scurrying lizards, fountain grass, and scrub bushes direct your steps along the gravelly bed; but barrel and cholla cacti and palms decorating the slopes raise your attention. Trail sections lift you onto plateaus, where the San Jacinto Mountains meet your gaze west. The sweep of open space before the ridgeline lends the scene a cinematic aura. 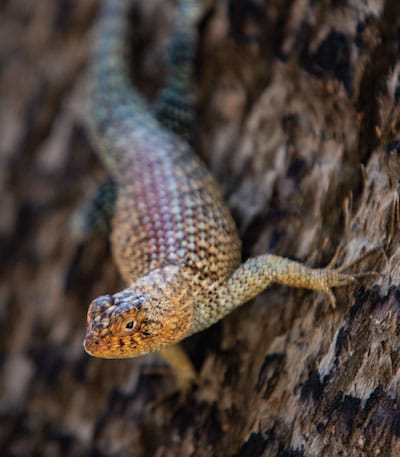 The granite spiny lizard shelters in the crevices of boulders.

While Palm Canyon Trail extends for 15 miles, hikers do not have to walk its full distance to enjoy stone pools and waterfalls, such as at the 8-mile goal of Little Paradise (the amount of water, as elsewhere, dictated by seasonal precipitation).

Cars must be out of the Indian Canyons parking lot by 5 p.m., but it’s worth noting that Palm Canyon connects to a web of routes heading east. In fact, it is possible to shoot off from one trail to another as far as Indio. Or you could take the West Fork to join up with the Jo Pond Trail heading southwest 12 miles to the ridgeline dividing Coachella and Garner valleys. 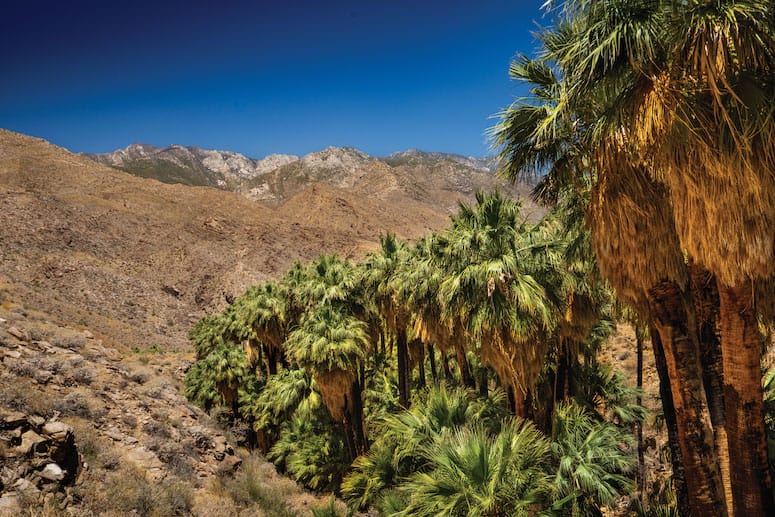 The fork of Palm Canyon Trail with Mount San Jacinto in the background. 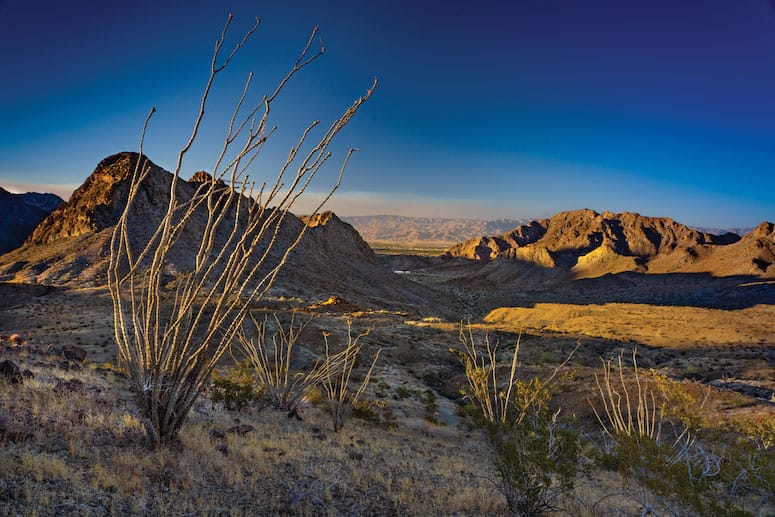 You could start in the Indian Canyons to hike the 8.8-mile Boo Hoff loop, but trailheads in the La Quinta Cove and at Cahuilla Lake County Park provide more expedient options.

Santa Rosa escarpments seen from a car window may convey an overwhelming sense of brownness. But walk the Boo Hoff loop with appreciative intention and you’ll see the landscape as a painter might — rich in colors and shapes. Cacti and ocotillos dot the hillsides. Branchy red masses of Thomas’ buckwheat and ground cherry with light-green, ridged “lanterns” line the trail.

The Boo Hoff hike includes dry washes near the trailheads. But increased elevations reward hikers with stunning views down and across canyons and even of the Salton Sea. In the quiescence, you can almost hear the echoes of geological forces and envision a time-lapse video of the materialization of terra firma. 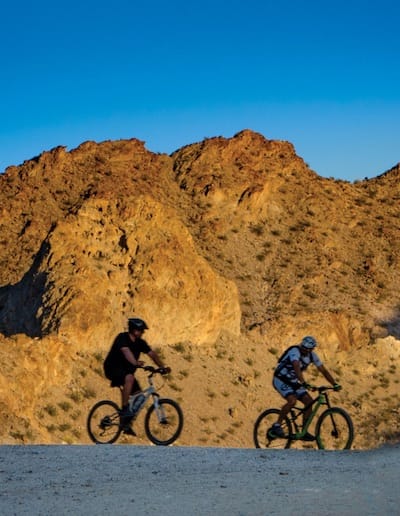 Mountain bikers at the head of the trail.

Bestowed with a particularly colorful name, the Boo Hoff loop honors one of the early members of the Desert Riders, an equestrian group formed in 1931 and responsible for building and maintaining Coachella Valley trails.

Though fewer trails crisscross the national monument’s southwest region, hikers nevertheless can make connections. Veering off in a southwest direction, a hardy individual might take the Guadalupe Trail to Cactus Spring Trail and from there head west to Ribbonwood Equestrian Campground in Mountain Center. 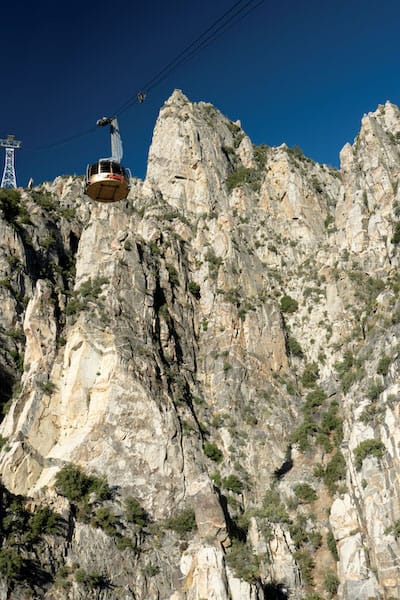 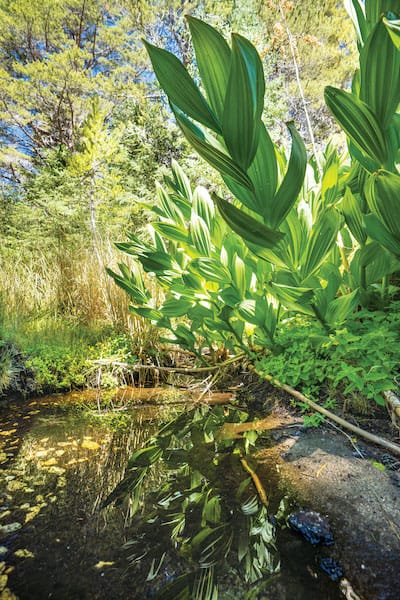 Technically but not logically speaking, a person could hike the Jo Pond Trail from the Indian Canyons, head northwest on the Pacific Crest National Scenic Trail toward Idyllwild and — eventually — to Mount San Jacinto’s 10,834-foot summit. Again, efficiency suggests a better route: the 5.5-mile trek from Palm Springs Aerial Tramway, which offers a starting advantage of 10 times higher elevation than the Indian Canyons.

An ineffable presence of air strikes you the moment you exit the tramway’s mountain station. Nose up to a Jeffrey pine to inhale the scent of butterscotch and you will begin to grasp the aromatic pleasures of the alpine forest of cedar and pines ahead.

Ignore Newton’s first law of motion and pause on your hike to absorb the surroundings. Listen to the stream’s peaceful song ushering you into the wilderness. Note the patch of brilliant green corn lily. Idle on a rock at Wellman Divide and ponder the magnificence of yonder Tahquitz Peak. As the trail veers north and becomes rockier and lined with manzanita, rein in summit aspirations enough to notice — as you scan the distance you’ve covered — how Round Valley holds the forest at bay and how the tramway station perches on the “edge” from which you know Palm Springs is visible.

The Pacific Crest National Scenic Trail from Wellman Divide heads down to Idyllwild (the divide is, in fact, a point of entry to San Jacinto from “the other side”). And at a junction slightly less than one-third mile from the peak, a hiker could descend to Little Round Valley, opting to go southwest to Marion Mountain or northwest to the Pacific Crest trail ending at the U.S.–Canada border. But pulling the plug on going to San Jacinto’s peak for its 360-degree views is akin to reversing a Ferris wheel before you reach its apex. Stay upwardly mobile and scramble over granite boulders for the final bid to stand triumphantly on the summit. With no more literal ground to gain, you can nab an internal reward: perspective on all that is below you.

And, indeed, for this moment, it is all below you.

• READ NEXT: The Living Desert Zoo and Gardens Marks 50 Years by Bringing Australia to the Coachella Valley.