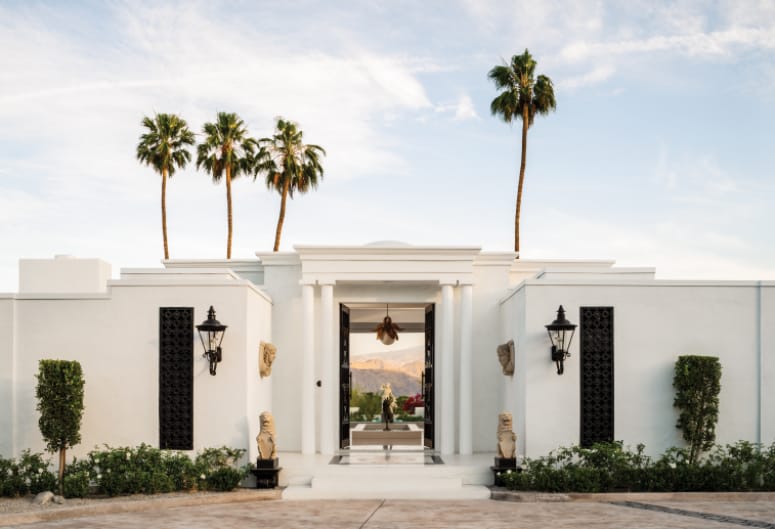 “Our mission was to strip away any unfortunate additions that had been done over the years and any original details that were superfluous. I wanted the best parts of the original and classic architecture to shine through, and everything we added or subtracted to support that concept. For example, on the exterior, we removed visible gutters on the front of the house, removed travertine panels that had been added to the front entry way, removed an ornate wrought-iron railing on the back loggia, and so on.” The lions that greet you at the front door are not original to the house and were likely added by George and Rosalie Hearst. “If you look at pictures of San Simeon,” Cole says, “you’ll see these little lions. They’re all over the entrance to Hearst Castle.” The wall-mounted cast stone plaques are also from the Hearst collection. The vintage gilt metal and glass globe lantern hanging in the foyer is from Christopher Anthony Ltd. in Palm Springs — Anthony Cochran.
PHOTOGRAPHS BY LANCE GERBER

“Our goal was to make the house feel glamorous but in no way trendy,” says Anthony Cochran, designer of the elegant midcentury masterpiece once owned by George and Rosalie Hearst. “It had the potential of going full-kitsch-Liberace — or worse, someone else might have come in and stripped away all of the decoration, leaving you with a plain white box. We ended up somewhere in the middle.”

Located in the Little Tuscany neighborhood of Palm Springs, San Simeonita was purchased in the fall of 2015 by Edward Cole and Christopher Wigand. The 7,000-plus-square-foot house is a 1962 Palladian-style residence conceived by renowned Hollywood set designer James McNaughton and built for Mr. and Mrs. Harry Morrill. The home’s floor plan, with its spacious rooms, expansive windows, and unbeatable views, is believed to have been inspired by Hearst Castle in San Simeon and was decorated with a number of treasures from the Hearst collection. “During the 1960s,” Cole says, “ the Hearsts were selling things off. If you were a high-end interior designer, you could buy bits and pieces from their collection.”

Interestingly, by 1964, this home was the primary residence of George and Rosalie Hearst, a purchase that set them back a whopping $300,000, according to a March 20, 1964, article in The Desert Sun. In 1977, the mansion provided refuge to their niece, Patty, who had been convicted of bank robbery and released on bail pending appeal. 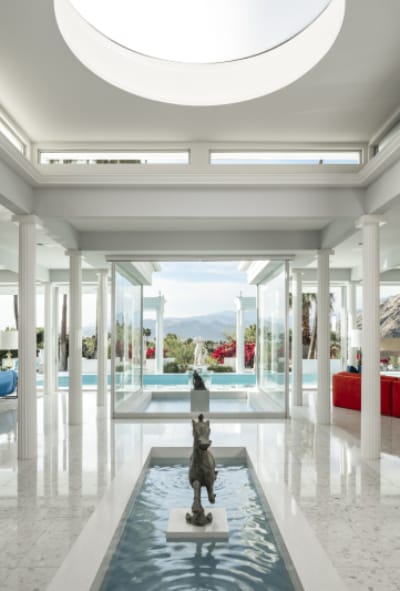 “We completely reimagined the reflecting pool,” Cochran says. “It was covered in patterned tile and had planters attached, which were interrupting your eye from being drawn outside.” So, the planters had to go. The dome had always been there, but Stoker and his team replaced it and added lights. “There are several domed skylights in the house,” Cochran says, “and when you’re driving by at night, they glow, and it looks like there are multiple moons coming up over the roofline. It’s spectacular.” The horse sculpture in the reflecting pool is a vintage replica of the Flying Horse of Gansu. The flooring comprises large aggregate terrazzo tiles, and the fountains and floor borders are engineered quartz. 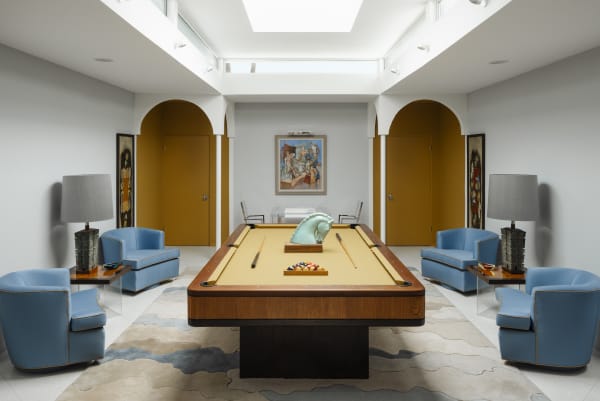 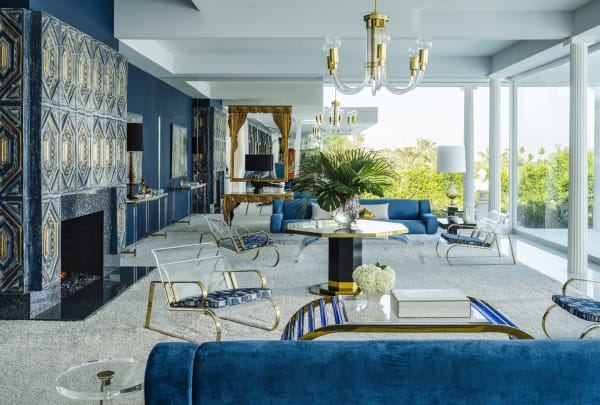 Referred to on the 1962 floor plan as the “inner atrium,” this room — which leads to the master and mistress bedrooms — originally housed a reflecting pool. It now serves as a game room and suite entry. The doorway arches, which were original to the house, had been removed at some point but have now been re-created based on the Architectural Digest photos. The rug, vintage Edward Fields, provided the color scheme. “Everything in this room began with these blues and beiges,” Cochran says, “then we turned up the color volume with fabrics and paints.” Four re-imagined Harvey Probber swivel chairs provide seating; the fabric is Egg & Dart satin wool. The 1960s bronze table lamps atop the vintage Vladimir Kagan end tables are James Mont, with custom shades from Palm Springs Lamps. The painting on the back wall is Men with Manikin (1940s) by Bertram Goodman and came from Stewart Galleries in Palm Springs. Below, the 1960s “Box Line” backgammon table and “Metric Line” chairs are by Charles Hollis Jones.

“In Palm Springs, there is a default to using vibrant and often overpowering colors,” Cochran says. “I took more of a European approach to color where the hues are a bit ‘off.’ We chose the darkest possible navy for the walls and accented with a deep peacock color in the fabrics.” The restored chandeliers are vintage Charles Hollis Jones. The antique gilt Venetian marble top console and mirror came from Stuart Galleries in Palm Springs. “Waterfall Line” illuminated “Bear” sofas, “Classic Line” round side tables, and “Double Waterfall” armchairs are also by Jones. The panels in the fireplace, which is original to the house, are believed to have come from an Italian chapel and were likely purchased at a Hearst sale. The brass and lacquered center table is by French designerJean-Claude Mahey, 1970s. The 1960s pink Murano glass vase is by Seguso.

“We started coming to Palm Springs in about 2013,” Cole says. “Chris found the house through our real estate agents, Nelda Linsk and Lindell Campbell. Which is funny, because in the back of the [Poolside Gossip] photo Nelda is in, you can actually see this place. The Kaufmann House is our next-door neighbor, down the hill.

There were a few waves of renovation. Wave 1 sought to stabilize the property. Since its construction, there had been a number of additions to the house; Cole and Wigand had them removed. There were also termites, and the house had to be tented. And then came the floors. “All the tile inside and out was really mismatched, and none of it was original,” says Travis Stoker, whose company, Stoker Construction Inc., made the renovations.

“Ed and Chris had amassed an incredible collection of art, accessories, lighting, and  furniture. The biggest creative challenge was to take their vast collection of different styles and periods and make them work cohesively.” Anthony Cochran

Using the floor plan published in Architectural Digest during the Morrill inhabitancy, the team restored the house to its intended layout. And when it came time to furnish the rooms, Cochran had plenty to work with. “Ed and Chris had amassed an incredible collection of art, accessories, lighting, and furniture. The biggest creative challenge was to take their vast collection of different styles and periods and make them work together cohesively.”

The renovation and redesign were finished for the Palm Springs Modern Committee’s cocktail party honoring artist and furniture designer Charles Hollis Jones (who created original pieces for the house) was among the most sought-after tickets of the season.

When asked the best place to enjoy the house, Cole and Wigand go to the same spot. “My favorite place is floating in the pool in the evening,” Cole says. Wigand agrees. “Looking from outside into the house at night. It looks like a stage set. It’s quite dramatic.” 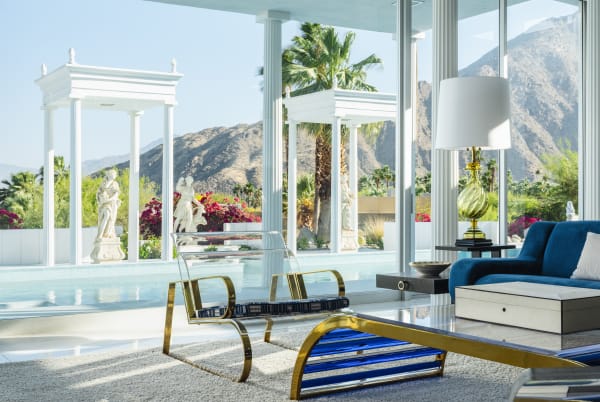 “I designed three coffee tables for the house,” Charles Hollis Jones says, “but one that I consider art is this one in blue acrylic.” Cole and Wigand reached out to the designer after purchasing the house, and Jones created many pieces reflecting design from previous decades and his current work. “It is amazing to experience firsthand Charles’ passion for perfecting new, unique designs,” Wigand notes. The owners’ appreciation of Hollis Jones’ work proved a challenge for Cochran. “Charles’ pieces are, in their own right, works of art,” he says. “But when any design is surrounded by like-minded pieces, they can cancel each other out. By complementing Charles’ designs with other powerful pieces and adding luxe fabrics, textures, and colors, they feel more a part of an overall collection and the homeowners’ passion for great design.” The 1960s green Murano glass table lamps are by Marbro Lamp Company; the end tables are custom made.

“With renovating period houses, the common approach is to restore them to their original design and condition. My attitude is, only if it’s well conceived.” Anthony Cochran 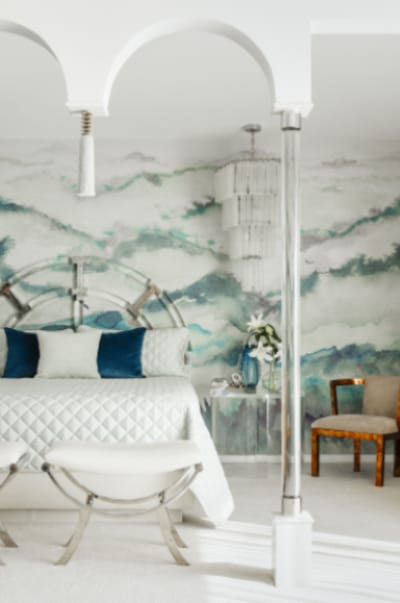 The mistress bedroom has carpeting by Flooring Innovations and wallpaper by Phillip Jeffries. “Our inspiration for this room was the master bedroom at Sunnylands,” Cochran says. Upon touring the Annenberg estate in Rancho Mirage, “I was absolutely flabbergasted at how equally traditional and modern the decorating was.” Here, the Lucite “O Line” Charles Hollis Jones bed (circa 1968) came from Casa Moderno in Palm Springs and is topped by a coverlet from Sienna & Lily. The Lucite “O Line” bedside tables are custom Charles Hollis Jones; above them, the bedside “Tronchi” chandeliers are 1960s Murano with glass by Mazzega. The arches, original to this room but later removed, have been re-created with Lucite columns custom fabricated by Stoker Construction and “Onyx Metallic Tieback” (Houles USA) tassels. The 1960s gilt chair is James Mont, and the benches at the foot of the bed are a vintage find. 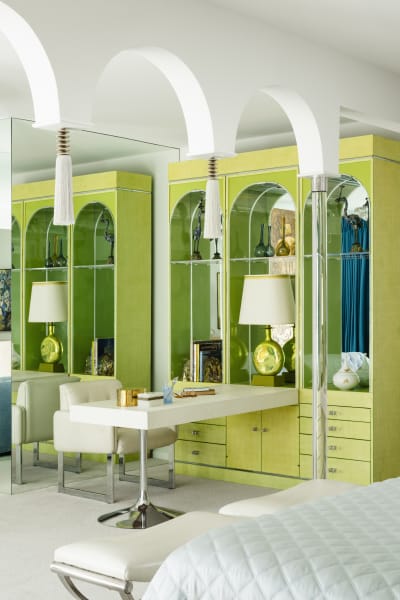 Designed by Arthur Elrod, the wall set in the mistress bedroom comprises the original desk, chair, and mercury glass lamp and is complemented by a collection of midcentury accessories. Built for an Elrod-designed house in Thunderbird Heights, this piece was purchased from Modernway in Palm Springs. 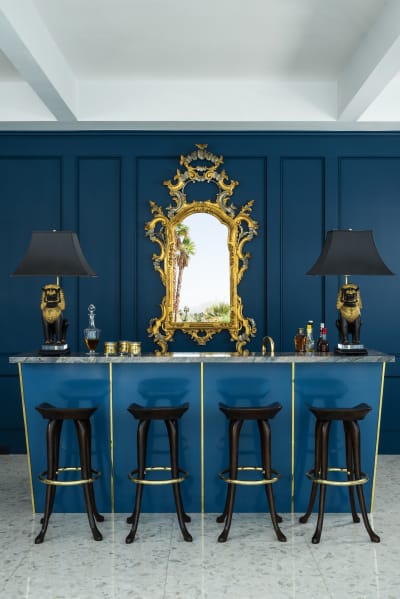 The lacquered bar with brass banding and Blue Fusion Quartzite top was custom designed by Cochran and fabricated by Stoker Construction. The bar stools were found by the client and refinished. The lamps, which began as 19th-century bronze and gilt Chinese foo dogs, are from Casa Moderno; custom shades are from Palm Springs Lamps. The antique gilt mirror, original to the house, is from the Hearst collection. 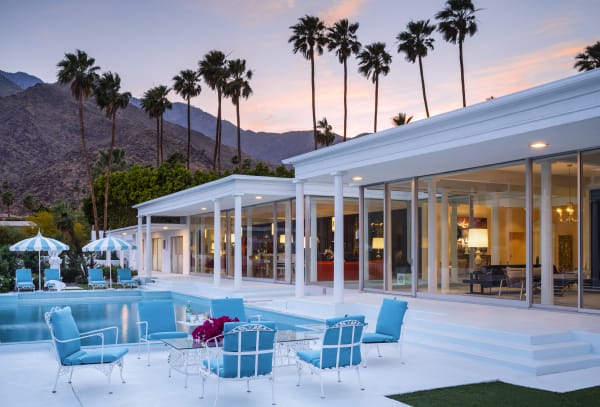 Huge, seamless plain sheets of glass provide the perfect blend of indoor-outdoor living that Palm Springs is known for. “The pool area didn’t need to be overhauled, just properly edited,” Cochran says. “We took down an ornate wrought-iron railing, which was not original to the house, removed an overpowering built-in bar, and basically de-cluttered. This is a good example of bringing out the best of the architectural elements that were already there and eliminating the rest.” Movie fans might recognize this location as the backyard of Liberace’s mother, Frances (played by Debbie Reynolds), in Steven Soderbergh’s 2013 biopic Behind the Candelabra.