It’s October in the desert, and Chet Johnson is building a snow globe large enough that he can fit inside. While that might sound unusual, there’s something you should know about Johnson.

If you’ve ever celebrated the holidays in Palm Springs, you might be acquainted with him from the Festival of Lights Parade, Breakfast with Santa, the annual tree-lighting ceremony, or VillageFest. Johnson is the guy with a full white beard and eyes that twinkle, dressed all in red. Maybe you’ve seen him.

The massive snow globe is a departure, however, for a man accustomed to a sleigh. When it became clear the country would still be struggling through the COVID-19 pandemic during the holidays, Johnson brainstormed ways to keep the magic of the season alive.

“We anticipated that Christmas would look different this year,” Johnson says, “so we looked outside the box and tried to predict what might happen, which is why we are 100 percent ahead of the curve right now.”

Johnson dreamed up the giant snow globe so children could still have a personal interaction with Santa while maintaining a barrier and safe distancing. He and Mrs. Jingle Claus — his wife, Theresa Johnson — also set up a studio inside their home for virtual visits with kids and plan to do some drive-by Santa sightings, too. 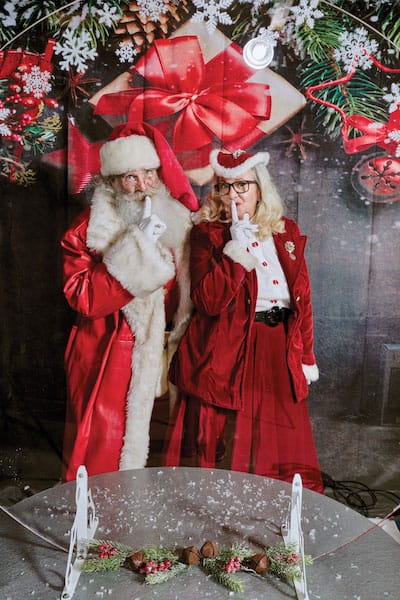 Chet and Theresa Johnson want to preserve the “wonder and surprise” of Santa Claus.

A licensed tile contractor who also runs Precision Automotive, an auto repair and hot rod shop in Redondo Beach, Johnson stumbled into the role of Santa five years ago. He was handed a fake beard and a prosthetic belly, and played Santa for the day at his grandkids’ school.

“I visited every one of the classes, and my two grandchildren didn’t even recognize me,” he says. “When it was all done, they took me out to a courtyard area where all the kids gathered and sang Christmas carols to me. That sold me right then and there. From that point on, I believed.

Johnson has spent the past few years perfecting his craft, to the point where he has grown out a real beard and dresses in red even when it’s not Christmastime. When curious children spy him at restaurants or walking through downtown and wonder if he’s Santa, Johnson responds by performing sleight of hand magic tricks with glowing red lights and shiny coins that read “I believe.”

In 2020, Johnson’s priority is to preserve the wonder and surprise of Santa Claus during what has been an exceptionally challenging year for everyone. “I am a firm believer,” he says. “No matter what’s happening, Christmas must endure.” And he’s not alone. There’s a whole network of Santas who have been toiling away behind the scenes, and they’re not just making lists of who’s naughty and who’s nice. They’re saving Christmas.

Back in mid-March, when the virus was still a whisper in the United States and not yet a roar, Santa Ed Taylor was already on high alert.

Taylor is the Southern California–based president and founder of the Worldwide Santa Claus Network, an online community with more than 3,000 Santas around the world. Santas join the group for networking opportunities and to swap ideas, but mostly to attend workshops and learn tricks of the trade, such as beard whitening, striking the perfect pose in mall photos, creating a connection with shy kids, visiting nursing homes, and engaging children who are differently abled.

At that point, Taylor wanted to get a feel for the upcoming season and asked the other Santas how they planned to cope with the impending crisis. Many said they wanted to throw in the towel … er, toy sack.

“They were reluctant to do anything at first,” he says. “Some of them said they were going to take a year off. But there were still a lot of us who wanted to make sure we could bring the spirit to the season.”

As far as Taylor was concerned, postponing the holiday wasn’t an option. Canceling Christmas? That would put you right on the naughty list. But in the face of a pandemic, what’s a jolly old elf to do?

Head to Santa’s workshop, of course. 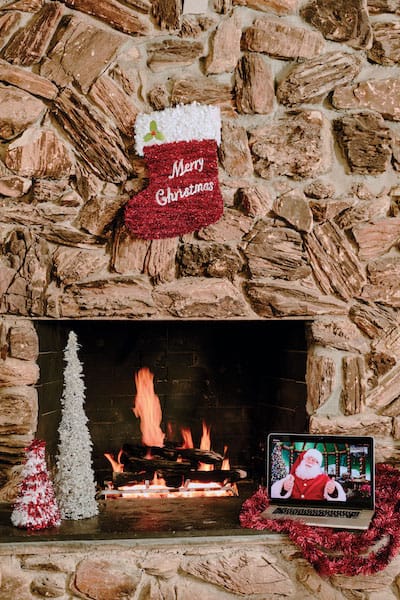 Ed Taylor, via Zoom, challenged Santas around the world.

“We can’t let anything stop us.”

Taylor got to work on a new plan for the holidays. First, he pulled together workshops on virtual Santa visits, including how to use video conferencing platforms, make use of green screens, and create Santa-centric sets. His wife designed North Pole graphics for Zoom backgrounds. Taylor also partnered with a platform called JingleRing, which personalizes virtual visits from a diverse lineup of Santas.

“In this community, we take the spirit of the season pretty seriously,” Taylor says. “We want people to have warm hearts and be kind and loving to each other, and we’ll do what it takes to make that happen.”

A couple months ago, Taylor put out another call — a challenge to the Santas. “My message,” he says, “was let’s work through this. Let’s find a way.” The response he received was a gift. The Santas were in, including many of the people who declined months earlier.

“I’m very inspired by their enthusiasm,” Taylor says. “I think the call this year was very clear. We can’t let anything stop us. We’re Santas!” 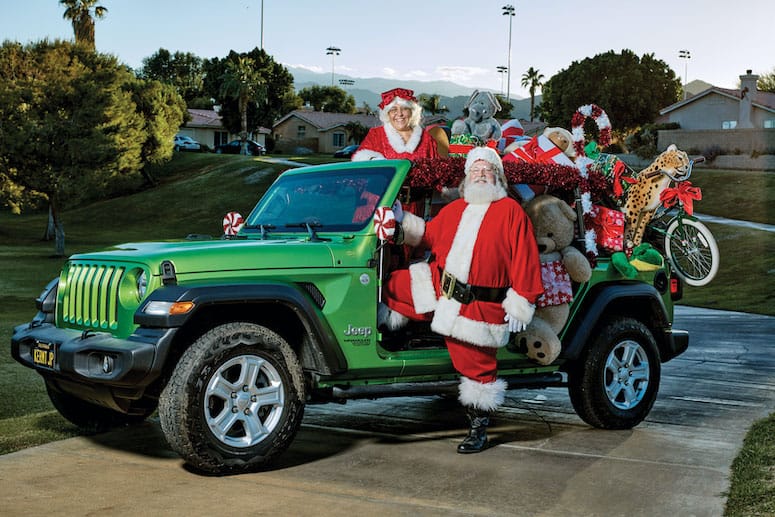 Greg Little and Laura Hunt Little decked out their Jeep to visit kids around town.

Santa Greg Little who started preparing in the summer for this pandemic holiday season, echoes the other Santas’ sense of determination:

“This year we’re going to take lemons and make lemonade.”

“We always make lemonade,” Mrs. Claus, aka Laura Hunt Little, corrects.
Little, of La Quinta, has been donning a red Santa suit for a decade, ever since he was volunteered to play the part for his son’s middle school fundraiser.

“I was volun-told,” he laughs.

After that first year, he was hooked. Portraying Santa was the opposite of Little’s day job producing large-scale corporate events, where he’s always the guy behind the smoke and mirrors.

“As Santa, all of a sudden, I was part of the magic,” he says. “The kids are so appreciative of it. That’s what gets me. That innocence.”

Every year, the Littles upgrade their costumes and find ways to enhance their characterization of the Clauses, because they take such joy in bringing joy to others.

This year, the Littles are decorating their green Jeep with festive ornaments and candy canes, then making visits around town. For families who still want pictures with Santa, Little collaborated with photographer Bridget Miller for socially distanced photo shoots — children pose on the front porch of a house while Santa pokes his head out from the door behind them. 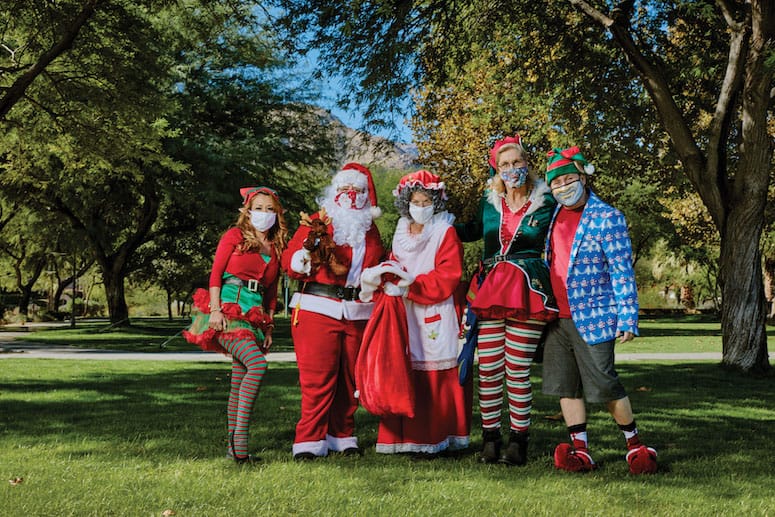 Her passion stems from a Father Christmas of sorts — her own. Duke’s parents divorced when she was a child, and she grew up estranged from her dad, Wayne Young. When Young died in 2011, Duke inherited his old Santa Claus suit.

That’s when she learned the story: Young didn’t have a lot of money. But he set aside some cash every paycheck, starting in 1963 until his death. Then, he purchased toys. Even though he couldn’t be with his daughter for Christmas, he found joy by dressing as Santa to deliver gifts to other children, often the less fortunate.

“Christmas is for love and memories.”

The passing of the Santa suit was like handing off a baton.

Duke has since donned her father’s Santa suit every Christmas, bringing presents to people all over Riverside County, including Safe House of the Desert and Ezekiel’s Gift of Love: Coachella Valley Down Syndrome Foundation. She is assisted by volunteer elves, and all donations to her organization are used to buy Christmas gifts and fulfill holiday wishes.

This year might look different from other years, she says. But it won’t feel different.

“I might sit in a yard and people can take photos from afar, or I might drive past some places,” she says. “But I don’t want anyone to forget what this is about: Christmas is for love and memories. It doesn’t matter what else happens. We can always spread love and make memories.”

• READ NEXT: Check Out the Entire Lineup of Stories in the December Issue of Palm Springs Life.