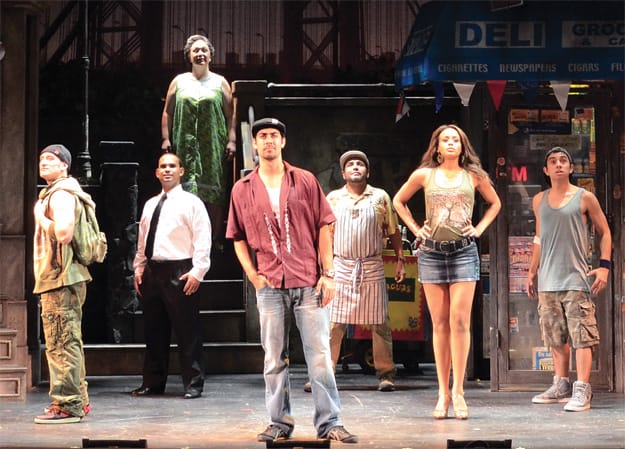 In the heights lead character Usnavi (a song in the show reveals a funny story surrounding his name) is a modern-day, Latino-version of Tevye from Fiddler on the Roof.  In fact, Fiddler is “in the DNA of Heights,” according to creator Lin-Manuel Miranda.

Winner of the 2008 Tony Award for Best Musical, In the Heights celebrates a community of industrious Latino immigrants in a New York barrio in pursuit of love and the American dream. Like Fiddler’s Tevye, Usnavi is the central figure in Heights and its primary storyteller. He reveals a close-knit neighborhood fighting for survival as the outside world closes in.

The juxtaposition of a traditional plot and 21st century music and lyrics (which also garnered Miranda the Tony for Best Score) results in a new spin on a classic American story. In one  review, Playbill called Heights’ score “rangy.” Blending rap, hip-hop, salsa, merengue, and more, Heights is an adventurous romp into a vibrant Manhattan world driven by the music and rhythm of three generations.

According to most critics, if you liked Fiddler on the Roof, you’ll love In the Heights.