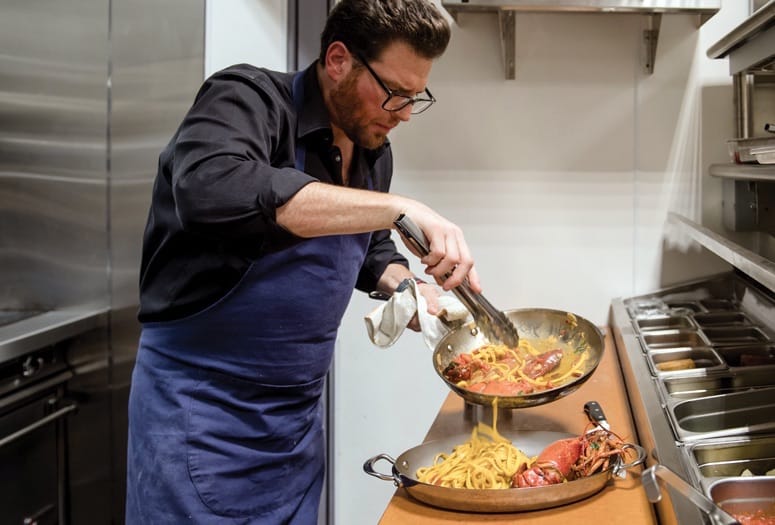 Scott Conant turns simple ingredients into a rich seafood dish with complex flavors at Cellaio, his Italian-inspired steakhouse in the Catskill Mountains.
PHOTOGRAPHS BY KEN GOODMAN

Some people are born with a fire in their belly for food. Celebrated chef and restaurateur Scott Conant easily falls into that elite class of culinary go-getters, his passion for cooking ignited as a young boy hoisting pots and pans long before picking up a razor. By age 15, Conant was working full time in kitchens while taking a heavy load of classes, split 50-50 between culinary arts and academic studies at W.F. Kaynor Technical High School in his hometown of Waterbury, Connecticut.

“It’s pretty intense,” Conant says of his lifetime love affair with cuisine. “I started full on, excited, and jumped right in.” He pauses, laughs, then adds, “I’ve been doing this for a long time.”

In a career spanning more than three decades and counting, Conant has firmly entrenched himself in
the collective consciousness of foodies worldwide, with a string of award-winning restaurants, three published cookbooks, and the launch of Sprezza — his signature product line of cooking and pantry essentials. He also muscled his way into the media spotlight, with numerous appearances on top-rated shows like Top Chef, Anthony Bourdain: No Reservations, and NBC’s Today, plus a long-standing gig as a judge on the Food Network’s wildly popular series Chopped.

After graduating from the Culinary Institute of America, an ambitious 20-something Conant stormed the cosmopolitan cuisine scene, running the kitchens of such Italian hot spots as New York’s il Toscanaccio, Chianti, and City Eatery, which garnered glowing reviews under his watch. His first restaurant, L’Impero, netted him a three-star (out of a possible four) review from The New York Times and the title of Best New Restaurant from the James Beard Foundation.

Conant’s manifest success, measured in myriad business enterprises, product lines, and pop-culture fame, may elicit whispers of a charmed life or golden touch, but the journey from kitchen brigade to celebrity chef was far from gilded.

“I don’t ever pretend that it’s been easy. The path to success is never what you think it is, right? That’s definitely been the case for me … As I tell all the chefs I’ve worked with over the years, ‘Learn from my mistakes, because I made them for all of us,’ ” he shares.

Conant notes that being a star on today’s culinary stage is not only about food or cooking. “It’s about business, investor relations, good accountants, and attorneys. It’s about being entrepreneurial.” 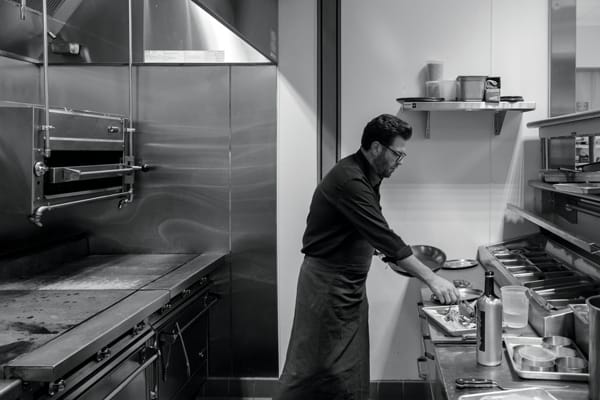 Gone are the days when owning a single restaurant was enough to breach the citadel of success — the current economics don’t line up, he observes. “The cost of running a restaurant and the difficulty in finding good staff are greater than they used to be. You need to have multiple restaurants. And if those multiple restaurants fail, God forbid, you’ve really put yourself in a tough financial position.”

He points to André Soltner, who helmed New York’s prestigious French restaurant Lutéce in the latter part of the 20th century, as an example of the charmed life chefs once chased.

“He owned the building housing his restaurant and lived upstairs with his wife,” he remembers. “Every day, he walked downstairs and went to work. That was what most chefs dreamed of — having this jewel box of a restaurant where all you needed to do was put your passion on a plate.”

Undeterred by 21st-century challenges and driven by an unrelenting desire to make a name for himself in the culinary world, Conant doggedly pushed through early bouts of doubt. Then New York Times restaurant critic Ruth Reichl favorably singled him out in a review of the restaurant he worked at early in his career, imbuing Conant with a heady shot of confidence.

“I’ll never forget the first time I saw my name in print in The New York Times,” he recalls. “It was really special and important, because it kind of took the clouds away; it made me believe that I wasn’t crazy for feeling like I’m actually good at what I do.”

But Conant isn’t just good — he’s great, as evidenced by his impressive achievements and global recognition.

Bright lights and celebrity aside, the chef’s approach to food is rooted in textured simplicity and flavored with the spirit of nostalgia. Described on his website as “soulful,” Conant’s culinary style reflects the ageless honesty of love-infused meals enjoyed around the family dining table.

“In a perfect world, when you take a bite of good, honest food, there should be a balance of something that’s familiar and nostalgic but also different — foods you’ve experienced before but are now seeing through a different lens,” he postulates. “When you can touch that level of nostalgia, people identify with it right away.”

However, evoking nostalgia isn’t enough to catapult a chef into the culinary stratosphere, notes Conant. “You have to be able to cook on a level where the food flavors are singular, but at the same time, every component or ingredient is harmonious.”

Contrary to what folks might believe about famous chefs, Conant says he doesn’t waste time trying to be overly creative. Rather, he strives for that elusive balance between familiar foods that warm the heart and imaginative twists that continually raise the bar.

“I definitely have a creative process that works for me. I’m fortunate that as I layer flavors, or menu items, or things that I think about as far as creating a dish, I can taste those flavors as they come together in my mind’s eye. My food is seemingly simple — but it takes a lot to get to simple.” 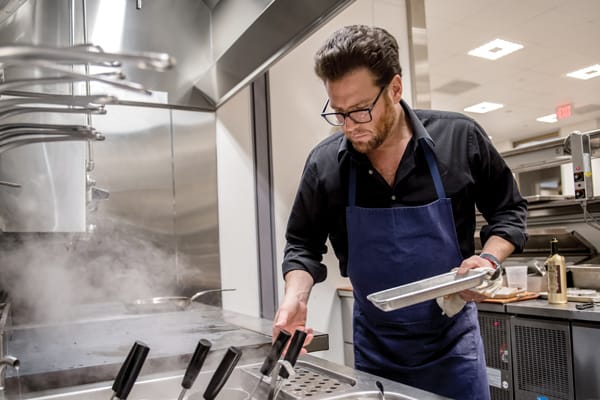 An Italian-American, Conant comes by his flair for Italian food honestly. It’s a style that complements his aesthetics and sensibilities. It’s also one of the most commercially viable, with upwards of 30,000 Italian-themed restaurants in the United States.

“Thank God people love Italian food, or I’d be out of business,” Conant quips. “There’s a soulful aspect to Italian food that people appreciate. Growing up, it seemed like everybody I knew had an Italian friend. You’d go to their house and eat Italian food — there’s that nostalgia — and experience a real sense of family.”

This memory of big Italian family dinners, whether real or conjured up in a diner’s mind, evokes a convivial atmosphere. “There’s wine, you’re clinking your glasses, having fun, and embracing life,” Conant says. “That’s what Italian food is all about.”

But taking that homespun familiarity to a sophisticated level that consistently hits the mark of excellence and originality is a daunting and often fleeting task.

“You know when you eat something really good, and you sort of get that tingle down your spine? It’s one of the most beautiful things as far as I’m concerned,” Conant says. “I try to embrace that as much as I can and then do takes or riffs on dishes that I’ve done in the past that created that situation.”

He reflects for a moment, then says with a laugh: “Listen, if it was easy to create dishes that blow people’s minds, everyone would do it. It’s hard to move the needle for people, but you have to ask yourself, ‘What’s the goal?’ The goal is that you want guests inside your restaurant to experience your love and passion for the craft in each bite. There’s no better way to connect with the personality of a chef than sitting down and eating his or her food.”

After the glitz and glam are stripped away, Conant says his core job is to make people feel good.

“Customers who are open to being happy, open to contentment, open to experiencing what we have to offer … that’s the ideal situation,” he concludes. “Everyone should leave my restaurants happier than when they walked in.”

The event is sold out.