In a world where evil lurks in the shadows, we want superheroes saving us from an array of dangers. Unfortunately, that’s an option limited to alternate realities. Yet, powerful forces do exist in our midst. Consider that even in the Marvel Comics Universe, those bounding to the rescue when lives are threatened may walk down a sidewalk unrecognized without a superhero uniform. So when you’re in a grocery-checkout line, the person behind you just might be a surgeon who combats attacks on human bodies — often with amazing tools specifically for their use.

Consider, for example, Scott Gering, M.D. While in the Army, he completed medical schooling with a fellowship in colon and rectal surgery, gained trauma-surgery experience in Iraq, and rose to the rank of lieutenant colonel. Subsequently in private practice in Rancho Mirage, he learned how to operate on patients with robotic equipment at Eisenhower Health.

“The robot is a powerful adjunct to a surgeon. It turns good surgery into great surgery. I am driving, but I am harnessing the power of a computer. I feel like Iron Man,” Gering says, referencing the Marvel character who channels superhuman forces through helmeted armor and Nano Gauntlets. “The robot magnifies your skill set. It gives you incredible 3-D optics and the ability to be exquisitely precise.”

Now on Eisenhower’s staff as vice president of surgical services, Gering emphasizes another robotic-system benefit: its ability to record every movement executed during an hours-long surgery — providing analytics that reveal inefficiencies. Armed with such data, a medical facility can develop a powerful team.

“You can use that artificial intelligence to train surgeons to be even better,” Gering asserts. 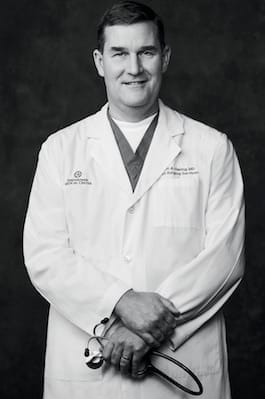 Stephen O’Connell, M.D., chairman of Eisenhower Desert Orthopedic Center, similarly champions the use of robotic equipment. “It allows cuts of the bone to be more precise by programming the robot based on preoperative 3-D imagery,” he says.  A team of 17 fellowship-trained doctors establishes his group as an arsenal of strength (think Marvel’s Avengers).

“Everybody we recruit has top-rate training from the best university centers in the country. Our super specialties allow our doctors to have the experience to perform the latest and greatest procedures,” proclaims O’Connell whose own specialty is hand and shoulder surgery.

Quickly dispelling the myth that surgeons lean toward drastic measures, he points to A. David Tahernia, M.D., the orthopedic group’s medical director and one of its two spine specialists.

“Back pain is a very common problem. Most of the time, people don’t require surgery,” O’Connell says, noting that solutions may involve medication, physical therapy, injections, or a combination thereof. “Dr. Tahernia created a spine program and has helped bring in physiologists [three pain management specialists] working with EDOC physical therapists to give more people access to a nonsurgical approach to their pain.”

Orthopedic surgeries comprise 40 percent of Eisenhower’s operating-room volume; knee and hip replacements play a major role within that discipline. Erik Schnaser, M.D., who completed a fellowship at New York’s Hospital for Special Surgery, serves as chief of joint-replacement surgery at the orthopedic center.

“He has continued developing our joint-replacement team,” O’Connell says, adding that Schnaser has been instrumental in the organization, planning, and patient education required to send more people home the same day as surgery or after just one night in the hospital.

“Previously, you had to do a joint replacement in the hospital,” O’Connell continues. “Now it is an outpatient surgery, unless you have a co-morbidity that requires you to stay overnight. More and more, Medicare and private-insurance companies are pushing for outpatient surgery. Technology has improved dramatically. We can do robot-assisted joint replacements with small incisions, making them safer so patients can go home the same day.

“Studies show that if you go home, you have fewer complications and take less pain medication than if you stay in the hospital,” he continues. “You have improved outcomes and faster recovery.”

“Motivated patients don’t want to be in the hospital,” O’Connell says. “There has been an education of the public that surgery need not be scary and you can get back to your quality of life. That’s easier to do in an outpatient setting.”

Gering wholeheartedly agrees that patients prefer to go home the same day as their surgeries and notes that the number of operations done on that basis has grown. When he began performing colorectal cancer surgery some 20 years ago, patients remained in the hospital for seven to 10 days. His current average patient stay is three days.

“My fear of risk of complications has dramatically declined with robotics technology. That’s the future of all abdominal surgeries,” Gering predicts. “We are getting to the point of so little collateral damage to the body that it is conceivable we could send colorectal cancer patients home the same day. That is amazing.”

Nevertheless, the endgame for patient care involves more than quantum leaps in technology.

“Over the last decade, Eisenhower has gone through substantial changes, driven in large part by Medicare,” Gering says. “I was in private practice here for 11 years, until 2017. The metrics required to get paid by the government demanded a lot of hours in your office setting. It became obvious to me that the way to preserve good medical care was to join Eisenhower and have the resources of a hospital.

“Eisenhower’s philanthropists, combined with great leadership, have allowed us to morph from a community hospital to a high-quality medical center and health system,” Gering attests. “You used to have to go to tertiary centers to get the level of services that we are doing at this hospital. It’s not just surgery, but surgery is a big part of it.”

“There is really an evolution/revolution in surgery,” Serfling says. “New techniques with robotics are so much less invasive. Things that used to require hospitalization can now be done safely on an outpatient or short-stay basis. So we are investing almost $200 million to rebuild and expand our outpatient surgical capabilities. When that’s done, we will be ready for the future. It is a very exciting time for everybody — to the patients who can recover so much faster and to the doctors who can embrace the new technology that we can provide them. ‘Transformation’ is probably a good word for it.”

• READ NEXT: Eisenhower Health at 50: A Giving Spirit.