Scott Smith Shares Musical Knowledge At College of the Desert 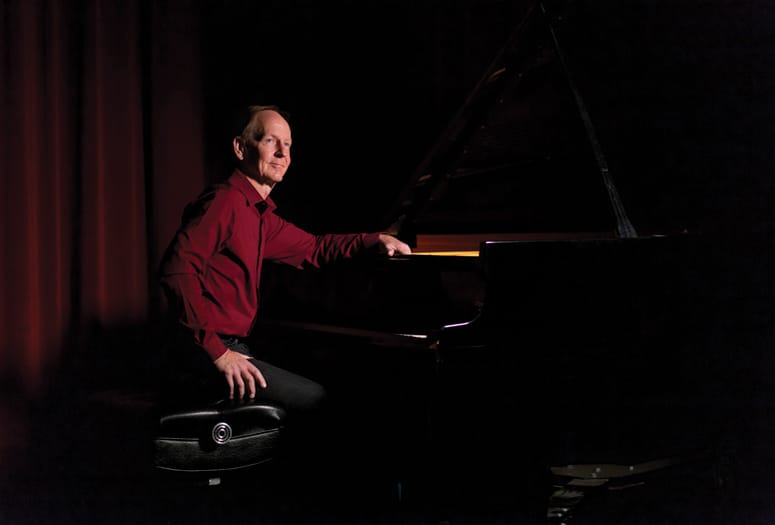 At 67, Scott Smith jokes that he hides his age well, as he lays claim to having scored the first
15 John Wayne movies (1930–33). The achievement actually traces to a span of five years in the late 1980s when he lived in Hollywood. The post-production house where he worked won the contract to “clean up” the sound for visually restored and colorized Wayne films.

“The video was so superior to the audio track that they ultimately replaced all the sound,” Smith says, explaining his opportunity to write new music for The Duke’s film soundtracks.

Though he began banging on keyboards as a toddler, growing up in a house with a piano and organ, Smith harbored a passion for flight and space. He dreamed of becoming an astronaut, even as an Indio High School student who was being paid to play piano at a Shakey’s Pizza Parlor.

“My eyesight wasn’t good enough to be an astronaut, but I started working more in places like Shakey’s and in a band with friends doing parties,” he recalls. “I ended up doing regular nightclub work with different bands.”

He studied applied music at College of the Desert and then enrolled at the University of Redlands. But he became so busy with professional gigs that he dropped out  and allowed work experience to serve as his musical education.

Smith describes himself as a musical theater director, with work that includes full-length productions at the McCallum Theatre and small-scale shows at COD’s Pollock Theatre. “You have to collaborate with the director and choreographer to determine cuts or alterations, set tempos, and talk about the overall concept,” he says. “It can even involve costuming.”

He is charged with “getting the music in” cast members — coaching them in enunciation, dynamics, and working as a team. Additionally, Smith plays a keyboard and often conducts the orchestra during live performances.

However, he never fully escaped the lure of flight. When he was 20, he bought a hang glider kit from Sears. He has since ridden thermal currents up to 18,000 feet over Mount Whitney and flown 150 miles over Yosemite National Park. He even competed for a while. In Palm Desert, he flew from Highway 74’s Vista Point until the landing area was closed. These days, he takes his glider northwest to Crestline.

“It’s a fringe sport, but, holy mackerel, it’s thrilling,” he says. “There are times in music when I feel a real spiritual connection, and I get the same from flying.”

Scott Smith tells his students that Mozart and Beethoven “would have had a field day” with digital technology. “It gives you the tools to get immediate feedback, which offers the opportunity to explore directions you wouldn’t otherwise because of time or financial constraints,” he says. “It gives you an acoustic palette of what your composition will sound like performed by an orchestra or even with synthesized sound you couldn’t do with analog instruments.”

Smith got his first computer in 1981; it was made by Timex, the company known for wristwatches. By the time he taught himself rudimentary computer skills, music synthesizers had hit the market. He bought a Yamaha model and learned how to program and integrate it into performances. This was “the gestation period” when more and more bands began using electronics, he notes.

His digital music students have included a San Francisco architect with no computer or keyboard experience and “20-year-olds with home studios who want to play with software, hear how other people work, and get feedback.”

Catch It if You Can

COD presents Phantom of the Opera at McCallum Theatre May 3–6 in a concert format with a 28-piece orchestra and a cast of 30. Professor of music Darlene Romano will conduct the orchestra, as Smith has “a lot of keyboard stuff to do.”

As a COD sophomore, Smith performed George Gershwin’s Rhapsody in Blue with The Desert Symphony. The once-experimental, now-iconic piece reflects Smith’s affinity for jazz. (Herbie Hancock and Chick Corea influenced him.) But he embraces other styles. Maurice Ravel earns a spot among his favorite classical composers “because of the richness and beauty of the orchestration.”

Smith says that he once didn’t enjoy country music but has since “grown to appreciate the emotion behind it.” He adds, “Bluegrass is so much fun to listen to.

“I didn’t like rap at first,” he continues. “But I started listening to rap artists with something to say that didn’t involve four-letter words and found the artistry in it.

“There’s nothing [in music genres] that I cannot get my mind wrapped around.”