For a home site in the hills above Palm Springs' Tennis Club neighborhood, architect James Cioffi designed an elegant, floating box that melds with the natural beauty of its surroundings.
RENDERINGS COURTESY OF NEIL CURRY OF NDC HOMES, INC.

Local builders and architects face a conundrum that’s found in all warm weather climates: How to provide homeowners with relief from the sun while preserving an open, indoor/outdoor lifestyle.

Screen House 1, designed by local architect James Cioffi, not only solves this problem, it does so in a decidedly, elegant manner.

The home — the first in a planned series of three — will be located on a secluded cul-de-sac at the top of the Palm Springs Tennis Club neighborhood near the crossroads of La Mirada Drive and West Sunny Dunes Road. Cioffi notes that he took inspiration for his design from pioneer modernists such as Le Corbusier and Mies van der Rohe.

“Derived by the theories of Corbu’s Villa Savoye and van der Rohe’s Farnsworth House, the primary goal of this project is to maintain the purity of the site and not suppress the beauty of its surroundings,” he says. “To achieve this concept, the idea was to design an elegant ‘floating box’ that preserves the natural desertscape below and doesn’t dilute the context.” 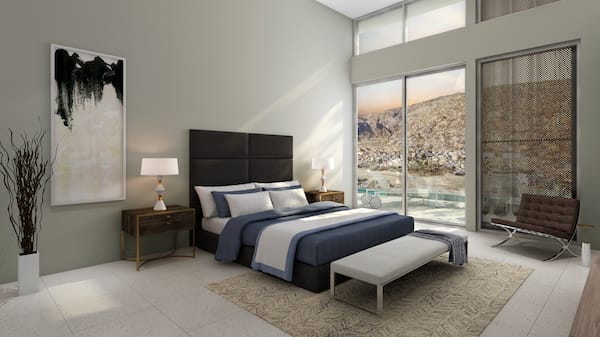 “The screens are the key design element on the exterior,” says realtor Neil Curry of NDC Homes, Inc. who will be representing the builders, Hochanadel/Foster, [the home builder Larry Hochanadel of Larry Hochanadel Construction, Inc., his wife, and his mother-in-law, Barbara Foster] in the sale of the house.

“Other distinctive features will be an oversized, 55-foot infinity pool that will appear to float over the desert floor, as well as the quartzite stone front that will sparkle in the desert sun,” adds Curry. “Oh, and it has an elevator from the garage to the main level. Who doesn’t love a private residence with an elevator!” 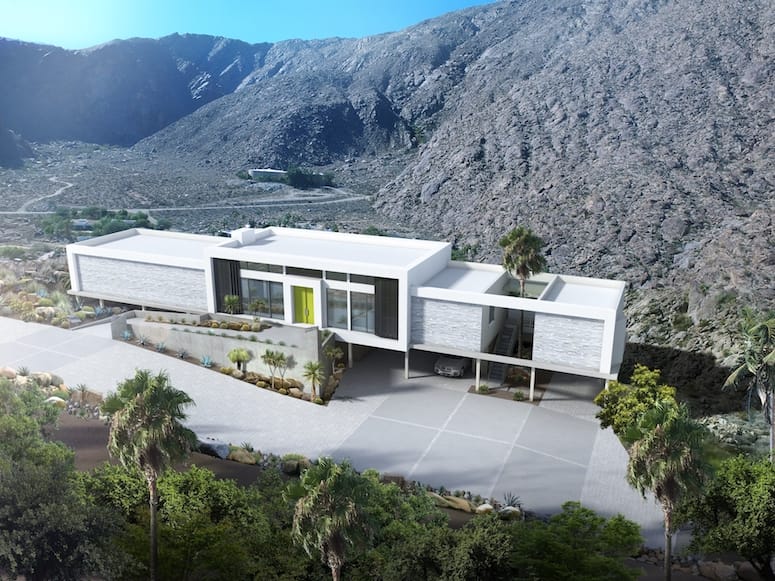 The home is sited so that it has 360-degree views of the Valley.

The floor plan will include four bedrooms and five bathrooms spread over 3,521 square feet. Cioffi has kept the interiors intentionally sparse and the layout will feature a great room concept with an open kitchen and art screens that will be utilized for space delineation.

“The interiors are voluminous, intentionally done so to provide an airy space with an open concept for entertaining,” adds Curry. “Duel, opposite-end master retreats were designed for privacy and there’s an attached casita for use as an additional guest quarters or home office.” 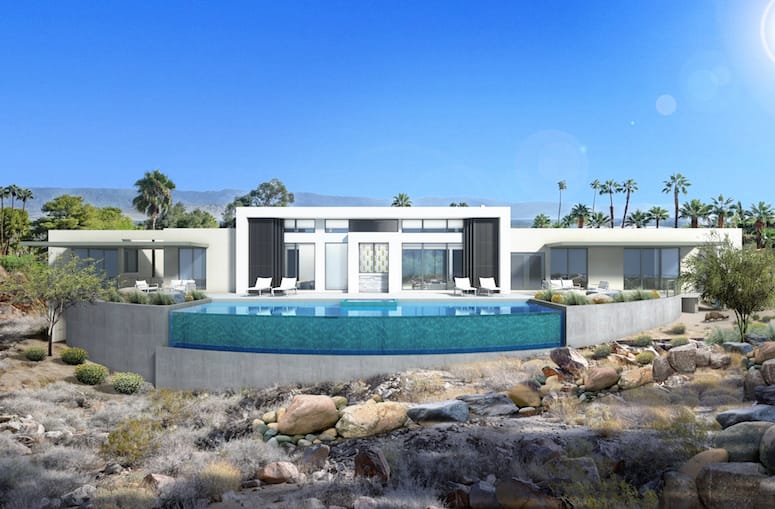 An oversized, 55-foot infinity pool appears to float over the desert floor.

Other features include Greenguard quartz solid surfaces, a tankless water heater, and high-efficiency insulation. The home will also be solar ready — and, of course, there are those sunscreens that will reduce the amount of heat and ultraviolet rays entering the house.

For Hochanadel, the project is a natural fit for a career that’s spanned over 40 years of desert home building. His father-in-law, Bill Foster, owned a contracting business and he built hundreds of houses in the valley, including Gerald Ford’s home in Rancho Mirage. Hochanadel began working with Foster in 1972 and then opened his own firm in 1993.

“I decided to work with Jim Cioffi [on this project] because I have known him for over 30 years and I have collaborated with him many times,” says Hochanadel. “My idea for this house was to work with the natural terrain and Jim saw my vision.” 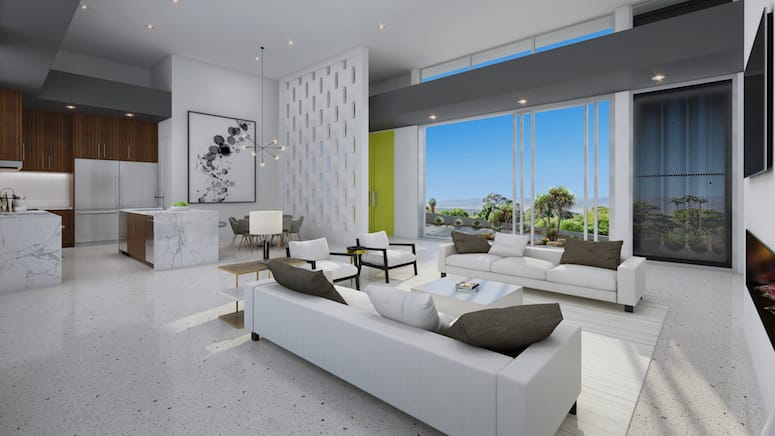 The open-concept great room features an art screen room divider near the entrance.