Seafood Dishes to Feast on Only in Greater Palm Springs 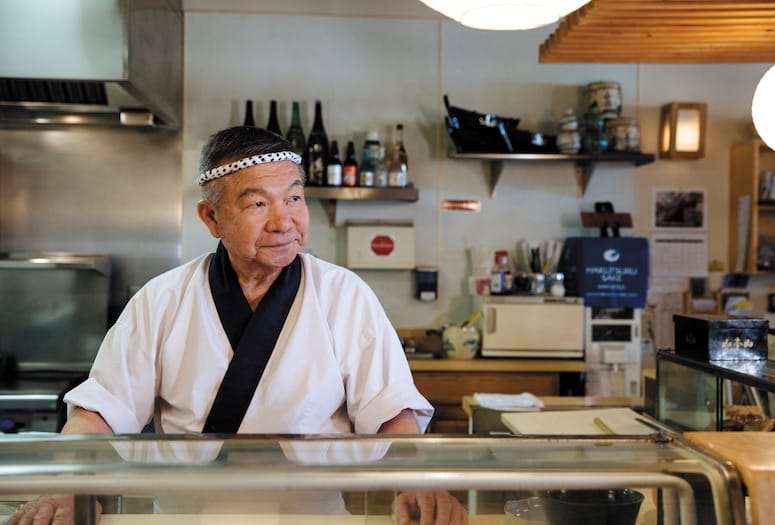 Don’t expect us to dish on Kiyo’s secret sauce for his Original Grapefruit Special at Kiyosaku in Palm Springs. Even his daughter doesn’t know the ingredients.
PHOTOGRAPHS BY NATASHA LEE

It’s a question visitors ask as they pass a sushi bar or eye a plate of seafood at the next table: Can there actually be good fish in the desert?

The answer is a resounding yes. Some Coachella Valley fish dishes are so beloved, in fact, they’ve remained on menus for decades. From sautéed sand dabs to succulent sashimi, here are four stalwarts that maintain a cult following.

Paul Bruggemans began offering whitefish at  Le Vallauris when he opened the elegant Palm Springs restaurant in 1974, in part due to a lack of options.

“At that time, the variety of fish in the desert was not that great, because transportation was not what it is today,” says the French-born restaurateur. “We couldn’t have branzino flown in from the Aegean and that kind of thing, like we do now, but we got whitefish flown in from the Great Lakes, and people loved it.”

Le Vallauris’ original chef — who’d arrived from the fabled Fouquet’s on the Champs-Élysées — decided to pan-sear the mild freshwater fish and top it with a bold whole-grain-mustard mousseline sauce and a sprinkling of fried leeks.

As the restaurant’s seafood offerings grew over the next decade, Bruggemans quietly took the whitefish off the menu. “Well, that lasted two weeks. There was such an outcry, we put it back on,” he recounts.

Current executive chef Jean Paul Lair gave the dish a refresh after taking the reins in the 1990s; while the original sauce remains, the leeks are gone, and the flaky fish sits atop sautéed whole-leaf spinach and slices of earthy shiitake mushrooms, flanked by a couple of yellow-hued saffron-boiled potatoes. 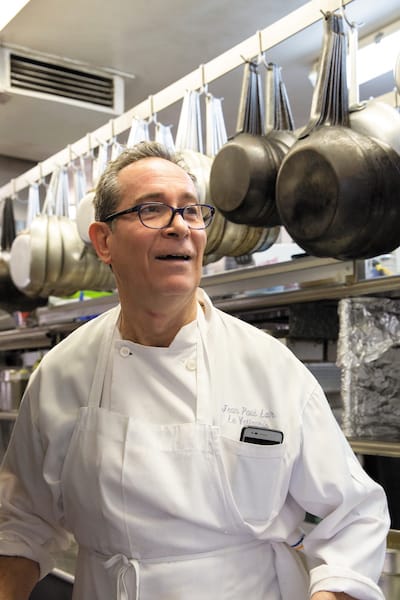 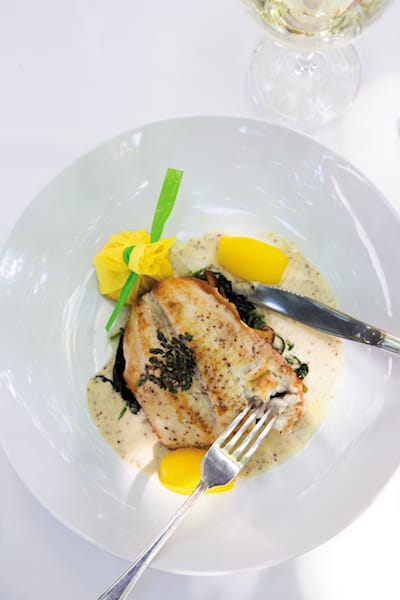 As for the fish’s golden crisp, which looks ripped from the cover of a cooking magazine, “it’s all about the butter,” says Lair, who sears each seasoned filet in a layer of the clarified stuff before finishing it off in the oven.

Today, the trusty dish remains a staple at the restaurant known as much for its dramatic tree-covered patio and well-heeled clientele as for its cuisine. The late Jeannette Edris Rockefeller, former Arkansas first lady and Palm Springs resident, “absolutely adored” the whitefish, says Bruggemans. Suzanne Somers still orders it.

And while both Bruggemans and Lair insist that there are more innovative seafood dishes worth trying at Le Vallauris — the chef recently created a fricassee of monkfish as a special, for example — the whitefish is a perennial favorite, even among those who can get it straight from the source. “People who live near the lakes are ecstatic about it,” Bruggemans shares. “They say whitefish in Michigan is never as good as here.”

If sushi-making is an art form, this dramatic dish — a flavor-forward fusion of fish and fruit — is Kiyoshi “Kiyo” Ishikawa’s masterpiece. And watching him meticulously prepare it behind the sushi bar, as he’s done thousands of times over the last two decades, can be a mesmerizing experience.

With his long, silver blade, chef Kiyo severs the top off a yellow-skinned grapefruit, then circles the inside, popping out the plump pink fruit, which he deftly de-piths, chops, and tosses into a bowl to mingle with some fresh-squeezed juice. 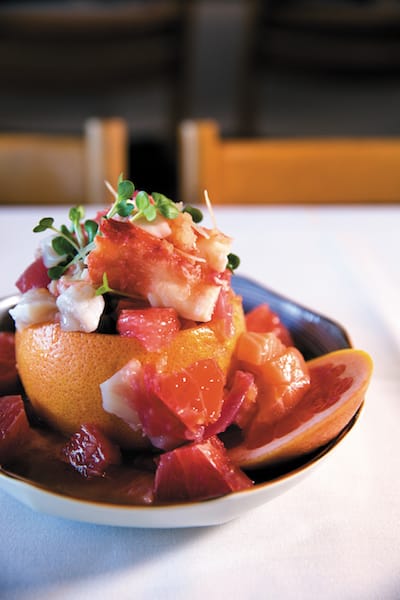 Without pause, he moves on to the fish, slicing raw, shimmering Scottish salmon, Hawaiian ahi tuna, and silky scallops from Japan, along with cooked Alaskan king crab, and adds it to the fruit bowl with a few spoonfuls of “secret sauce” and a sprinkling of daikon sprouts for color. After a quick mix with his chopsticks, he pours the citrusy concoction into the hollowed-out grapefruit, as the overflow cascades onto the plate below. Diners are provided with a straw for slurping every final drop of the juicy sauce, but regulars tend to just tip the whole thing back.

Ishikawa didn’t come up with the idea here in the grapefruit tree–dotted Coachella Valley, where he’s owned Kiyosaku for 38 years. Rather, it was during a 1997 visit to his native Japan that he spotted a chef on TV preparing a simple mix of grapefruit and scallops.

“I thought, Orange is too sweet and lemon too sour, but grapefruit is in between and refreshing. I came back here and created it,” he says, adding that he sources ruby red grapefruits locally in season and imports them from Texas and Florida the rest of the year.

The dish got a boon a few years in when Huell Howser featured it on the KCET program California’s Gold, and it has been the Palm Springs restaurant’s  No. 1 seller ever since — the kind of staple regulars come in for weekly. Once, when a party of 14 decided they wanted another round to go, Ishikawa kicked into assembly-line mode, sending each of them home with a Grapefruit Special in hand.

“He was like a machine,” says his daughter Mika Iniguez, who works at the sushi bar alongside her dad. But don’t expect her to reveal the recipe for that secret sauce. “I don’t even know it. He won’t tell me.” 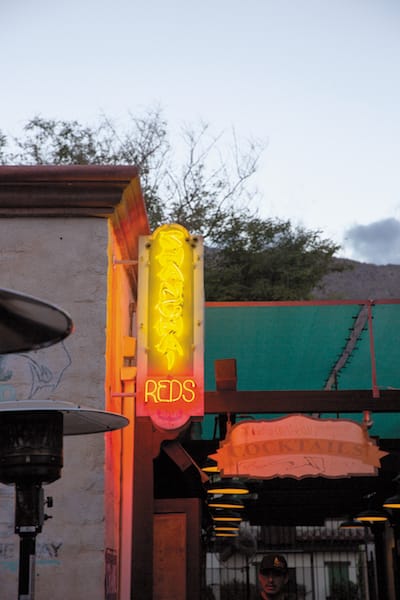 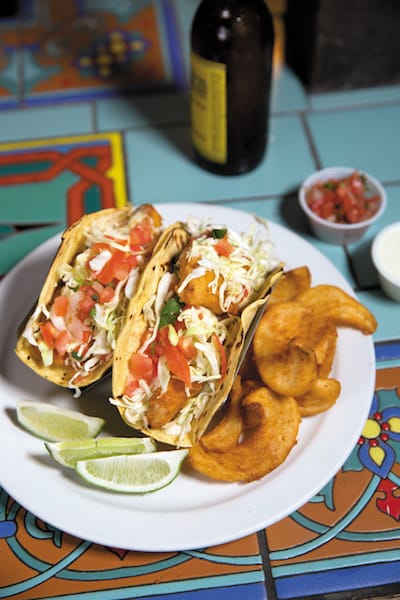 Plenty of people who show up at this Palm Springs hideaway assume that its buzzed-about Baja fish taco — piled with deep-fried fresh Alaskan cod, shredded cabbage, creamy white sauce, and a kicky pico de gallo — is the same as the one that’s served next door at the bar’s counter-service counterpart, Fisherman’s Market. But die-hards know there’s a difference.

“At Shanghai’s, it’s constructed more like a street taco, because it feels kind of like a street joint here,” says Louis Pagano, who owns both spots, as well as four locations in the valley and another in Orange County. “We charbroil the tortillas on a grated grill so they get a little burnt. Because we cook coconut shrimp back here, the oil has a little bit of coconut in it, and the taco comes with the pico de gallo already on it.”

Since Shanghai’s opened 18 years ago, the cooks who man the postage stamp–size kitchen behind the bustling bar have become minor celebrities — taking orders, sliding beers, and, most important, dredging fat pieces of cod in beer batter before plunging them into a deep fryer of bubbly canola oil, then pulling out the finished golden product and assembling taco after taco after taco all night long. And Pagano — a commercial fisherman who grew up in San Pedro, where he still sources the majority of his fish — could talk about each taco component all night long. The 8-inch corn tortillas (not at all street size, but who’s complaining?) arrive warm every day from a local maker; the ingredients for the jalapeño-heavy pico are hand-chopped and mixed daily before spending hours in a sieve to combat wetness; and that zingy white sauce stems from a family recipe originally used in other dishes as a bold substitute for dated tartar sauce.

“Everyone wants this white sauce,” adds Rich Hamilton, Pagano’s brother-in-law and the restaurant group’s CFO. “They want us to package it, to sell it. We’ll give them a little container to take home, and they say they want a bigger one.”

In a culinary world consumed by trends, from edible insects to egg-topped everything, Lord Fletcher’s, the 50-year-old English-style Rancho Mirage restaurant still owned by the Fletcher family, is a bona fide throwback. A portrait of Winston Churchill greets diners in the foyer. The walls are wood-paneled, the chairs covered in floral fabric, and a red brick fireplace separates the dining room from the bar, which displays British tchotchkes alongside the liquor.

“I call the cuisine here ‘our own kind of comfort food,’ ” says Terry Shidler, who joined the kitchen staff 42 years ago and became head chef in 1990. “It’s not trendy. It’s old-school English.”

Plenty of patrons come in for gargantuan plates of pot roast or the signature prime rib with Yorkshire pudding, but the sand dabs — named after a British royal and firmly planted on the menu since the 1960s — remain a top seller. The mild fish, wild-caught off the coast of Oregon, was pretty much born to be sautéed.

“It’s a petite fish that takes very little time to cook,” Shidler says. “It’s mild and flavorful but not overpowering, so it doesn’t need a sauce.

Instead, the chef lightly breads it in flour and egg wash, then drops it in a pan with butter, lemon juice, and a splash of white wine. The sand dabs (four halves that total 8 to 10 ounces) hit the plate next to steamed fingerling potatoes and the restaurant’s addictive creamed spinach (Shidler goes through 30 pounds of the vegetable per day). 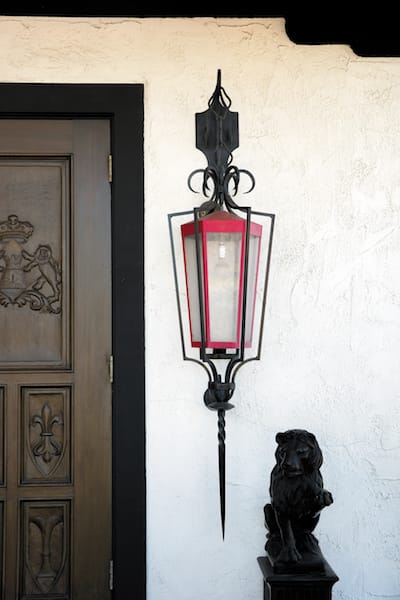 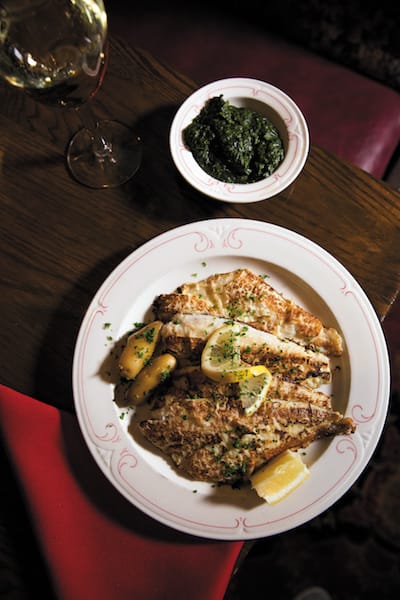 Once a SoCal staple, sand dabs have been disappearing in recent years to make way for more newfangled fare, making the dish something of a novelty for Fletcher’s. “People love them. We have customers who come just to order them,” Shidler  says. “People are also more conscious of what they’re eating these days. They’re eating lighter, so that’s a reason the sand dabs are popular, too.” Just don’t tell them about the butter and cream in the spinach.