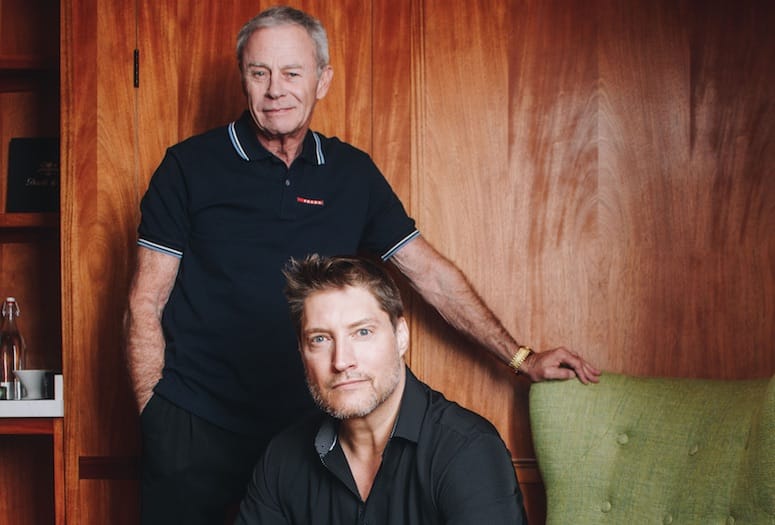 Maybe a soap star in real life is the best person to create a story that centers on one. That’s the idea behind the semi-autobiographical story Studio City, co-written by soap star Sean Kanan.

The frequent Palm Springs visitor and vacation rental owner called on a few of his connections, including daytime television veteran (and longtime Palm Springs resident) Tristan Rogers to make the six-part web series late last year. The show-within-a-show follows the life of actor Sam Stevens (Kanan) and the cast of the country’s No. 2 daytime drama Hearts on Fire. It chronicles the messy personal life of Stevens and the others (Rogers plays his stepfather) while mining the richness of the behind-the-scenes world of soap operas.

“It’s my love letter to daytime,” Kanan says. He co-created Studio City with Jason Antognoli, but the general story has been on the actor’s desk, or at least in the desk drawer, for more than 15 years. The short-form digital show, he adds, “seemed the best way to give it a life.”

Daytime television is generally portrayed in a campy or even negative light, says Kanan, who wanted to do something different. “Studio City isn’t over-the-top and melodramatic in a way that’s an insult to all the fantastic actors who work in daytime.”

The series, which streams on Amazon Prime Video, is showing promise. It earned 12 nominations from the 11th Annual Indie Series Awards for independently produced entertainment created for the web. That didn’t surprise Rogers, who says he “thought it was going to go places.”

Kanan credits Timothy Woodward Jr., who directs and produces Studio City, with delivering the high production values that garnered attention. Woodward is known for directing Hickok, Gangster Land, and Beyond the Law.

Kanan, who had roles in Gangster Land and Beyond the Law, knows daytime television best of all, making him a natural to imagine Studio City. He played A.J. Quartermaine on General Hospital twice (1992–1997 and 2015 for its 50th anniversary) and was nominated for an Emmy for his work on The Bold and the Beautiful.

The six 12-minute webisodes were shot in four days in Los Angeles. Other cast members include Emmy winners Patrika Darbo, Sarah Brown, and Carolyn Hennesy (General Hospital) and Scott Turner Schofield (The Bold and the Beautiful). Michele Kanan, Sean’s wife, is a producer who worked on the script and oversaw casting. His stepdaughter, Juliet Vega, plays his character’s newly discovered daughter.

And, of course, Rogers, one of the best-known daytime stars for his role as Robert Scorpio on General Hospital — a character who dates back to the 1980s Luke and Laura storyline that garnered rare (for daytime television) and sustained national attention.

Kanan and Rogers met on General Hospital, but their shared connection to Palm Springs bolstered their friendship. They also teamed up for True West at Palm Canyon Theatre in 2014. Now, they’re waiting to find out what’s next for Studio City.