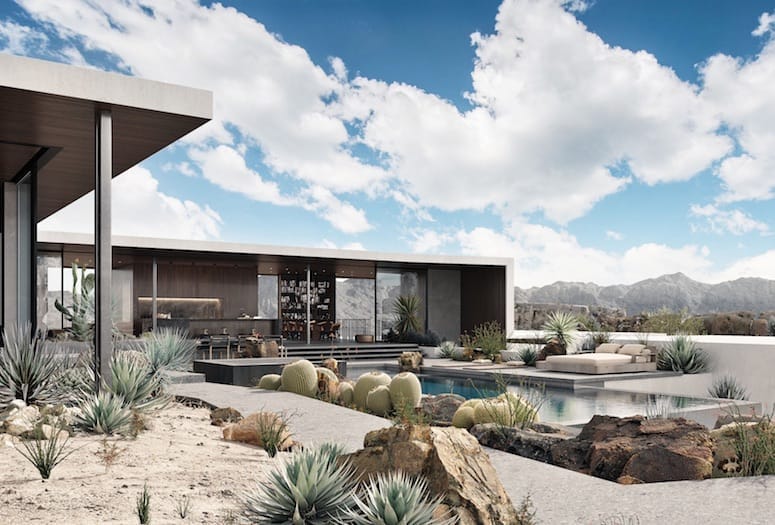 The interior appears to expand with its seamless connection to the outdoor gathering space.

Sean Lockyer presses his body weight against an 11,000-pound hunk of iron ore suspended midair. The rock twists slowly on its chain as a heavy equipment operator lowers it into place. Two workmen make haste to backfill so the beast doesn’t lose stability and sink.

It’s another boulder-setting day at Lot 50 in Desert Palisades, a private residential community perched in the foothills of the San Jacinto Mountains in Palm Springs. Lockyer, founding principal and lead architect of Studio AR&D Architects, and his team have been hauling rocks around this site in Chino Canyon for weeks, but the physical labor will soon come to an end. With less than two months to go, the firm is on a tight deadline to ensure this spec showpiece is dressed and ready for Modernism Week (April 8–18).

“Our vision was to take advantage of the views,” says Lockyer, whose site-sensitive architectural work probes the duality between natural and built environments. “The connection from the inside to the outside is always being thought about; that creates this perception that the property is much vaster than its interior. The size of the windows, the view corridors, and the placement of a tree or a boulder on the exterior are all very important to us.” 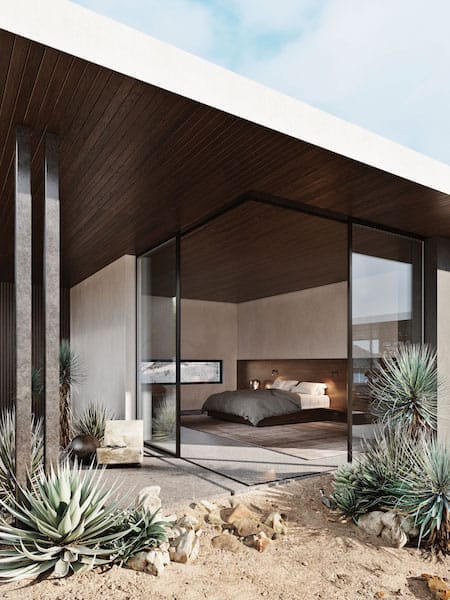 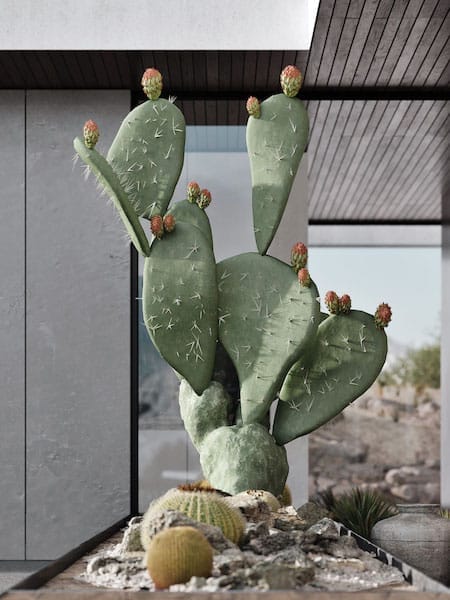 With the Coachella Valley buzzing below and the San Jacintos towering behind, this 4,227-square-foot sanctuary stretches around a front-loaded pool and an abundant outdoor gathering space. Guests enter through an inconspicuous front door. It’s massive — flush with 10-foot-4-inch ceilings — but treated to blend in with the raw concrete exterior and floors.

An open-concept kitchen, living, and dining/bar area anchors the two-story abode on the main level, which also encompasses the master suite, laundry facilities, and a media room with attached bath. On the home’s south-facing side, running the length of the great room, floor-to-ceiling sliders look out across the water to the valley views beyond. That’s the vista the future homeowner will wake up to every morning in the master, where a corner unit of sliding glass takes full advantage of the indoor-outdoor experience. 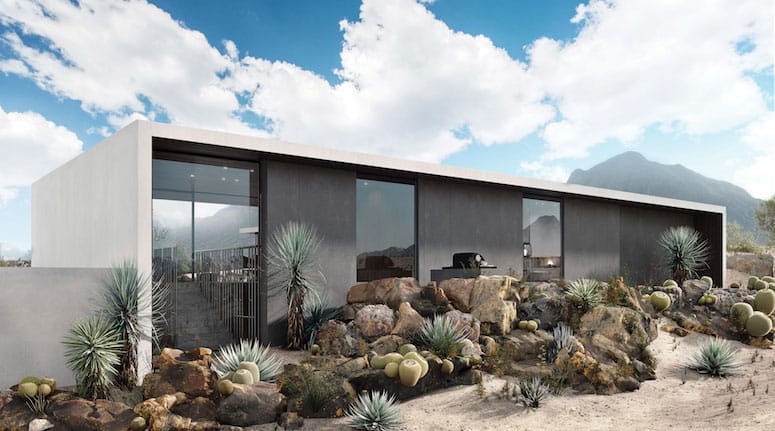 Native vegetation and hundreds of boulders offer local color and a measure of privacy.

Informed by the environment, Lockyer’s designs take root somewhere between functional structure and sculptural art. Dark woods, stone, and expanses of glass are a sort of signature, the elements themselves emblematic of the enduring nature of the desert where he wields his craft. Drama emerges in Lockyer’s use of stained ash across the ceilings and flat-cut walnut on most of the walls. A two-sided fireplace in the great room gets an oxidized steel treatment. Leather decks walls in the front powder room. Among the most distinctive structural features indoors is the entryway coat closet; Lockyer detached it from the walls, brought it to the center of the foyer, and wrapped it in walnut. In doing so, it becomes an architectural focal point — a wooden box with space to walk all the way around it and a giant window behind.

“There’s not a lot of adornment or decoration,” Lockyer says. Instead, he wants to shift the focus to the landscape. The earthy palette of rich browns and grays inside intentionally picks up on the tonality of the iron ore outdoors. 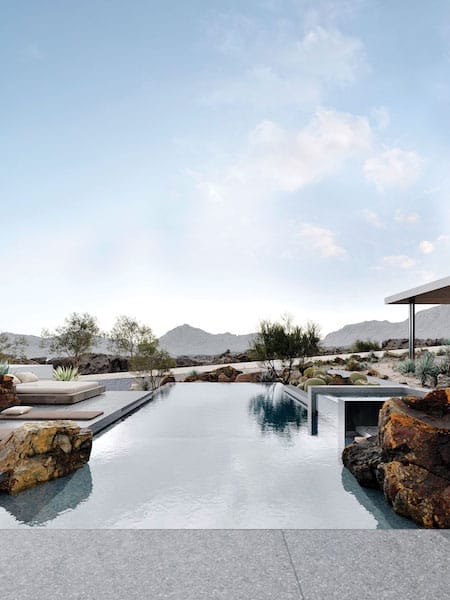 Sean Lockyer designed the sanctuary around an infinity pool and outdoor gathering space.

“A lot of what you’re seeing in Palm Springs spec houses right now is completely white interiors,” says Desert Palisades developer Ed Freeman, who commissioned Lockyer to design this home along with two others that will set the pace for the budding community. Lot 50 is poised to be the priciest thanks to all the woodwork and premium finishings. Notably, as Freeman points out, there is hardly any white. “It has a more masculine feel on the inside than most houses. Some folks might not like that, but we trust Sean and we’re rolling with it.”

Albeit planar in fashion, with sharp angles and a flat roofline, the structure melts into its surrounds as if it were carved from the land. Native vegetation and hundreds of boulders set by Lockyer’s team shroud areas that need privacy while also creating interesting outcrops for entertaining and side conversations. One of Lockyer’s favorite hangout spots is the poolside dining table; it cantilevers over the concrete floor and mirrors the wood detailing of the eaves. 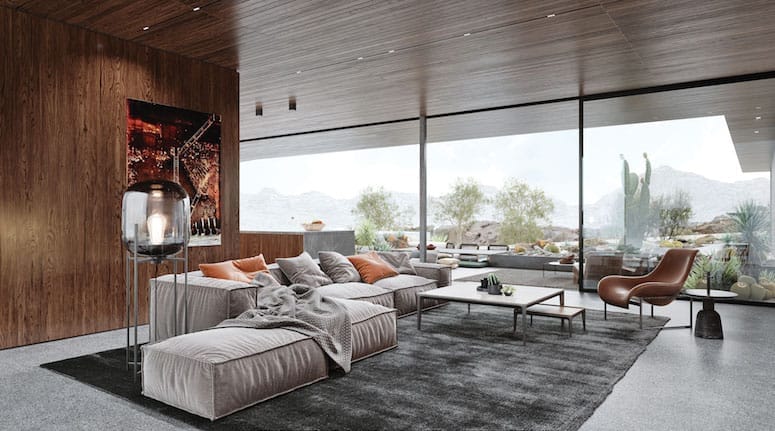 The interior palette of browns and grays picks up the tones in the natural surroundings.

The largest picture window spans almost two floors, adding drama to the stairwell at the heart of the house. Near the kitchen and the adjoining butler’s pantry, a minimal wood-block and blackened steel staircase descends to two additional bedrooms. Each have en suite baths and private patios that provide all the quietude needed to meditate or get lost in thought. The stairs also act as the primary access point for the homeowner, as the detached garage connects to the lower level by way of an exterior pathway.

Lot 50 is the first Studio AR&D home that will reach completion at Desert Palisades. Seven more are cued up behind it on a client list that continues growing. After all, who wouldn’t want the creator of the community’s award-winning guardhouse to build their hillside estate? 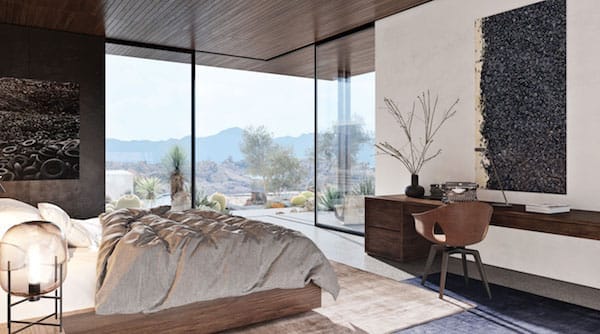 Sliders in the master suite open to a private patio with south-facing views. 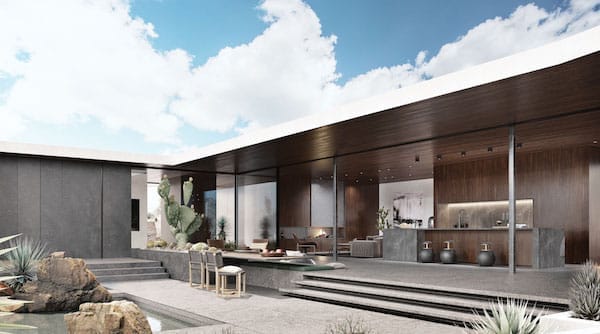 Lockyer, who has offices in Palm Springs and Los Angeles, met Freeman and became involved with Desert Palisades by chance. The architect was midconstruction on the nearby Schnabel Family Retreat at the same time that Freeman and his cohorts were building the infrastructure for Desert Palisades.

“Every afternoon, I would walk up to the development from down below to get my exercise,” Freeman recalls. “The Schnabel house was being built, and it was just an amazing [design]. One day I thought, I’m going to walk through it this time. It was late in the afternoon, and there was one individual standing out there, testing some stains on wood. It turned out to be Sean.” Freeman relayed his environmentally forward vision for Desert Palisades and told Lockyer he hoped to see homes like the Schnabel’s developed in the community. Ultimately, he hired Lockyer to design the guardhouse, completed in 2016.

There was a mountain of boulders to contend with on that project, too. And Lockyer oversaw the placement of each one — as he did with Lot 50 and as he will with the lots to follow.

“The guy’s kind of a Renaissance man. He wants to be involved in everything. He wants to decide where each plant and rock is going to be placed,” Freeman says. “The more homes he can do up there, the happier I’ll be.” 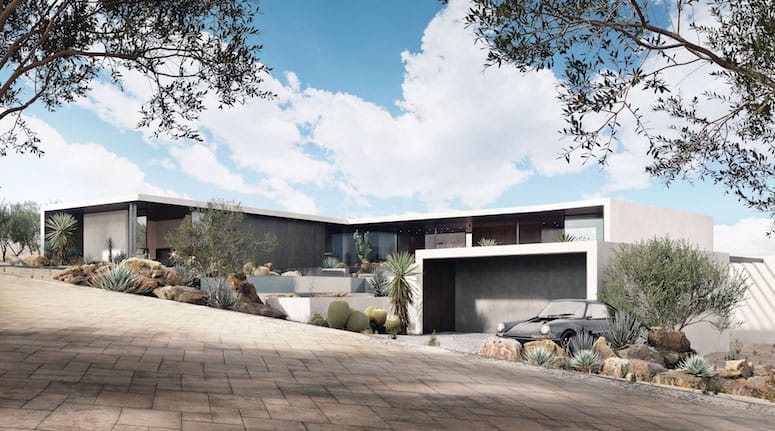 Low slung, with flat rooflines, the house appears carved from its boulder-strewn surroundings.