Sean Patrick Flanery-Led Film Sets Up Base in Palm Springs 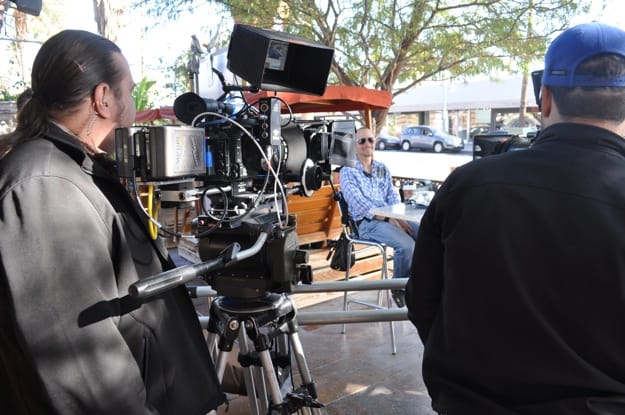 Jane Russell, Cloris Leachman and Bo Derek have all dined at the Palm Canyon Drive location.

Wednesday, however, Kessinger’s establishment became the backdrop for an actual movie.

“Hidden Away” stars Sean Patrick Flanery – known for “The Boondock Saints,” “The Young Indiana Jones Chronicles,” “Dexter” and “The Young and the Restless” –  and Emmanuel Vaugier, who has appeared on “CSI: NY,” “Smallville” and “Two and a Half Men”.

A variety of valley locations are helping to tell the story of a woman who runs away from an abusive husband and begins a new life in Palm Springs. Her husband returns years later to terrorize her.

Brian Nolan, the film’s unit production producer, approached Kessinger about using Azul for a movie scene location after spending time with friends at the restaurant on one of his many treks to the desert from Los Angeles.

“I am a huge fan of Palm Springs,” Nolan said Wednesday morning between takes. “All of my friends hang out here quite regularly. I feel like I’m here pretty often.

“I knew for this movie we needed a location like this,” he continued, “and we needed a cool restaurant, cool patio, coffee kind of scenario. I called George and he was completely open to it and very excited to have us.”

“I think they liked that it was on the street to give it more of a city appearance,” Kessinger said. “We’ve done everything possible to help them so they would come to Palm Springs.”

That kind of ‘can do’ attitude has made an impression, especially in Palm Springs allowing the movie to take ownership of the town.

“I would like to actually do more movies here,” said Kim Ray, the movie’s line producer. “Everything is either Los Angeles, New York or Toronto. It’s nice that Palm Springs is letting it be Palm Springs. We really want to focus on that element. So many towns won’t let us do that.”

Azul’s name has actually been incorporated into the script, as have other businesses in town used as backdrops like the Saguaro Hotel and its Tinto restaurant.

“There are so many great scenic locations here,” Nolan said. “It’s very picturesque. It looks really good on camera as well. It’s a good small town that works well with our movie.”

Nolan said the movie revolves around the Palm Springs Aerial Tramway, which played a big role in basing the shoot in Palm Springs. The crew will move to that location this weekend as part of its 20-day shoot between Palm Springs and Los Angeles.

Kessinger, who is also catering for the crew, will serve in the Tramway’s Lookout Lounge. “We’ll have heaters going up there,” he quipped.

“Hidden Away” expects to finish production by the summer, and the independent film does not have a distributer yet.“We don’t know what outlet it’s going to, but we have very high hopes because we have great stars and great production value,” Ray said.