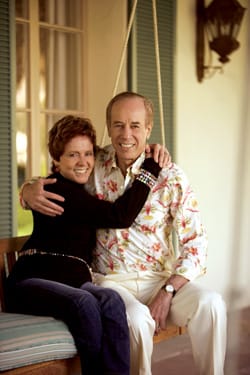 The man who created the world’s leading luxury hotel company — the $3 billion Four Seasons empire — lives modestly in a linear bungalow built in the Spanish style of early Palm Springs. Towering trees stand as reminders that this well-established neighborhood has been around since the 1930s, when the house served as the Wurlitzer family estate — long before the present owners, Isadore and Rosalie Sharp, imbued it with a warmth and style of their own.

Step across its threshold and right away the house feels welcoming; it would be comfortable to curl into that cozy living room sofa and wrap the crocheted throw around you. The aroma of fresh coffee wafts into the room from the nearby kitchen. Magazines
and books lie about, suggesting the owners’ intellectual bent. The house exudes a thoughtful casualness that reflects the Sharps’ preferred lifestyle.

An early-morning visit finds “Issy” and Rosalie Sharp trim in sports garb, exuding the glow of good health. They look refreshed and chipper after their daily workout in a roomful of exercise equipment. Both glanced out windows to see their small citrus orchard and ribbons of petunias and poppies edging the grassy expanse of grounds.
They appear grateful for this second abode, allowing them a respite from the frosty winters of Toronto, Ontario — their permanent home and business base. After 51 years of marriage and raising four boys, they share an easy camaraderie.

“It was love at first sight,” Rosalie says. “We were at a friend’s wedding, and Issy asked me to dance. I was a bridesmaid. He was wearing blue suede shoes — after all, it was 1953! — and turned out to be a very good dancer.” Ballroom dancing remains one of their mutual pleasures.

Both were raised by Polish immigrants in Toronto’s nearby shtetl (Yiddish for “small Jewish town”). Rosalie’s father owned a dry-goods store and lived on the premises. “We had little in the way of worldly goods, but what I did have was a library card. Books were my escape,” she says. “In high school, I preferred to stay home and read rather than go out on a date. But that was before Issy Sharp.”

He was their high school’s all-around, athlete-hero nicknamed Razzle-Dazzle Issy. She was the naturally pretty girl and good student unimpressed by his sports achievements. He was five years older, and Rosalie’s friends considered him a dangerous charmer who would probably break her heart. “We were an improbable match: He was sporty, and I was nerdy. But Issy is seriously persuasive,” Rosalie concedes with a youthful giggle.

“I knew he was a playboy, but I couldn’t help myself,” she says. “I could have been headed for disaster. I was only 20. But once we were married, he turned into the world’s most responsible husband.”

Issy intones, “Rosalie is devoted to her love of reading and has a remarkable capacity to retain and comprehend literature. Of all her creative talents, her greatest gift is the ability to write. Once, after she wrote a heartfelt letter to V.S. Naipul, the author responded with equal appreciation: ‘Stop reading and start writing.’” Now she does both, having published her third book last April.

Likewise, the sprightly, 75-year-old Issy has made a mighty impact on the world. His father, Max Sharp, a plasterer by trade, developed a home-building concept: He would build a house and move his family in during the last stages of construction. By the time he turned 16, Issy had lived in 15 different houses. He graduated from what is now Canada’s Ryerson University with a degree in architecture and then joined his father in the construction business.

Ordinarily, it’s a long journey from the blue-collar side of Toronto to the money-lit streets of booming Shanghai. But Isadore Sharp — founder, chairman, and CEO of Four Seasons Hotels — is an extraordinary entrepreneur. In fewer than 40 years, the Canadian business tycoon has created a worldwide icon for luxury lodging. Today, he runs 74 hotels in 33 countries and has more than 35 properties under development. He recently formed a partnership with the world’s richest man, Bill Gates, and a Saudi prince in a business in which he retains a 10 percent interest, remains CEO, and garners nine figures under a long-term incentive contract.

He became intrigued in the business when a client contracted Max Sharp & Son to build a hotel near the grounds of the Canadian National Exhibition. He began raising capital to build his property, but prospective investors were skeptical about his chances for success. Rosalie even dropped out of the University of Toronto and worked to supplement their income.

After persevering for five years, Issy had the resources to design a hotel in downtown Toronto — around an inner courtyard so guests would not have to see the unattractive part of the city.

The first Four Seasons hotel, opened in 1961 at a cost of less than $1 million, was an immediate success. Under Issy’s leadership, Four Seasons gradually expanded into a world-class hotel company.

Rosalie gave birth to four sons. By the time the youngest was ready for nursery school, she was determined to go to art school. Issy’s company was building condominiums, and she wanted to design the model suites. But she also wanted credentials beyond being the boss’ wife.

Rosalie graduated with honors from Ontario College of Art and Design and opened Green Valley Workshop (now Rosalie Wise Design) to create silk-screened, hand-printed fabrics, incorporating them into her interior designs. She received early commissions to create model suites and public areas for two luxury apartment complexes in Toronto. Since 1977, she has designed interiors for several Four Seasons Hotels. Her work includes suites, guest rooms, and restaurants in Boston; Houston; London; Vancouver; Washington, D.C.; and Toronto, as well as a 400-room hotel in Nagasaki, Japan, for the Prince Hotel chain. Reflecting her interest in old textiles, porcelain, art, and antiques, her projects set forth the distinctive style defining Four Seasons properties.

In between projects, Rosalie topped off an English ceramics collection begun in the 1960s and wrote Ceramics: Ethics and Scandal. Using a scholarly approach, she mastered
the art of simultaneously entertaining and educating readers with lively narratives on the life, manners, and people in 18th century London.

Philanthropy and public service have always figured prominently in the Sharps’ personal landscape. Rosalie serves as chancellor of Ontario College of Art and Design and is past chair of its board of trustees.

She also serves as a trustee on the board of Toronto’s Gardiner Museum and is past chair of Ashkenaz, a local Jewish cultural festival.

The Sharps have contributed $5 million to Mt. Sinai Hospital and $5 million to Ontario College of Art and Design. Issy facilitated a gift of $20 million to Toronto Opera House through Four Seasons.

Another charitable cause came about after a personal tragedy: the 1978 death of one of their sons, then 17, from cancer. Two years later, 21-year-old cancer patient Terry Fox started a cross-country marathon to raise funds for cancer research. Through the efforts of this young man, the Sharps saw an opportunity to advance medicine and to honor their son. First, Issy promised an occasional night’s lodging and cash. Then he challenged the business community to follow. Fox’s goal was to raise $25 million — $1 for every Canadian citizen. Following Fox’s death in 1981, Issy founded the Terry Fox Run. Through his leadership, proceeds from the annual event — held in more than 50 countries — have exceeded $450 million for cancer research.

Four Seasons receives unprecedented recognition and accolades worldwide. It has appeared on Fortune’s list of 100 Best Companies to Work For in America since its inception in 1998 (more than any other nominee). It has won American Automobile Association Five Diamond Awards for the past 18 years. Zagat named it the No. 1 hotel chain in its 2006 survey. Condé Nast Traveler honored 18 Four Seasons properties in its Top 100 list, while the chain took 16 slots in Travel + Leisure’s top 100.

Issy says his success comes from his staff. “We have built a company based on long-term employees,” he says. “We hire for attitude and promote from within. We succeed not as individuals, but as a team. We can go anywhere in the world and pull together a core of employees because the golden rule is part of every culture. It’s the power of the value system — not what you say, but what you do and demonstrating your ethics by your actions. At Four Seasons, we maintain an open door. All our senior people have come up through a meritocracy.

“The power of this principle was demonstrated when a monumental tidal wave struck the Indian Ocean in 2005,” Issy says. “It was an instant emergency at our hotel in the Maldives. Three hundred employees acted at once. Many swam into the roiling ocean to save trapped kids; management arranged to have guests return home by hiring a private jet. All worked on their own initiative using the same principle: living up to the golden rule. Everyone survived without serious injury. Later, a grateful guest wrote this to us, ‘Your values rest on rock.’

“We consistently strive to make our workforce the best in the world, always being able to deliver on the promise. We start at the top, trusting employees to use common sense in situations like tsunamis. That gives them a sense of purpose and the courage to believe in themselves. And it ensures the Four Seasons legacy will endure.”

Issy plans to open eight new Four Seasons hotels this year, including locations in India and Alexandria, Egypt. And at a time when the Western world is at odds with Islam, Four Seasons is building throughout the Middle East, and this Jewish hotelier’s biggest financial backer is Muslim.

“Businesses are relationships, based on common values, values such as staying true to your word,” he says. “You can have different religious beliefs, but underlying those beliefs must be people with similar values who can work together.”

In Shanghai, where philanthropy is virtually unknown, Issy persuaded the Chinese bureaucracy to support the Terry Fox Run. As soon as his construction team broke ground on the Four Seasons Hotel Shanghai in 2004, Issy went to city hall asking permission to stage the run. He got the permit, though the government ruled that a maximum of 25 people could participate. The second year, the government allowed 50 participants. Then it removed all restrictions, thousands ran, and Shanghai businesses hung out banners to honor the spirit of a determined kid from British Columbia claimed by cancer.

“The Shanghai run has become a way for China to westernize its culture with its own individual stamp,” Issy explains.

Too modest to be high profile and uninterested in the social scene, Issy and Rosalie remain self-cultivated individuals driven by immense creativity.

Rosalie Wise Sharp has penned the couple’s rags-to-riches story in a book released in April. To read an excerpt from Rifke: An Improbable Life (ECW Press, 2007), click here.