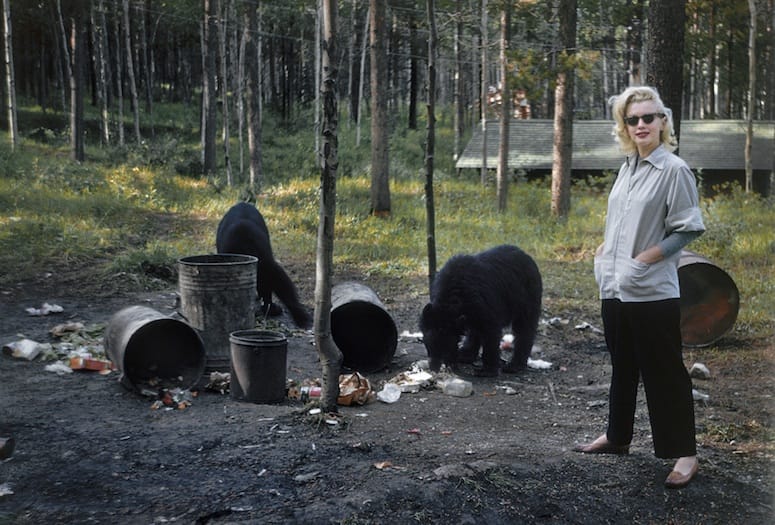 As the story goes, Marilyn Monroe and Allan “Whitey” Snyder, her personal makeup artist and friend, were on their way to hair and makeup on set during the filming of River of No Return.

The two came across some baby black bears, and Snyder captured the moment. In snapping this particular picture, he documented Monroe without her makeup. Pierre Vudrag, founder of Limited Runs, purveyor of original and vintage posters, print art and photography, notes, “She almost never let anyone photograph her without makeup.”

Vudrag came upon photos of Monroe taken by Snyder at auction and he says, “I think what attracted us to the photos and what makes them special, is that many of these were not meant for publication. She was posing for a friend and neither he nor she had the intent for them to be seen. We were caught by surprise because some photos revealed a side of her many had not seen.”

The “Black Bears” photo has become one of the most unique pieces curated by Vudrag as part of an extensive collection of rare photographs taken of Monroe.

The exhibit features many never before seen, contemporary fine art prints for sale highlighting photographs by Snyder as well as images by: The lawn shoot took place just before the release of Gentlemen Prefer Blondes.

Mischa Pelz: A commercial photographer, he had never worked with his friend until he was hired to shoot lawn furniture with Monroe posing as the model. Many of his photos have not been seen in more than 60 years. Milton Greene: The famed fashion/celebrity photographer was able to take some of the most iconic images of Monroe. Greene also photographed a gorgeous photo of Monroe mostly covered up…a departure from her overtly “sexy” public persona. While filming Bus Stop on the back lot of 20th Century Fox on a Sunday afternoon, they had the whole lot to themselves.

Thomas “Doc” Kaminski: Hired to document Monroe in the making of The Misfits, he chronicled the star both in front of the camera and behind the scenes.

Lani Carlson: Part of the exhibit is dedicated to the former Capitol Records sound engineer and amateur photographer. According to Vudrag, a friend at the Chicago Tribune gave Carlson a press pass and told him to tell people he needed photos of celebs for the AP (Associated Press). In August of 1952, after setting up the sound for the band at a 20th Century Fox Party to celebrate the release of the song, Marilyn, Carlson came back with his camera and followed Monroe around at the party. He was given time for an exclusive photo shoot. While he developed the photos, he forgot about them until 2010.

For more information on the exhibit: www.limitedruns.com