See the Artistic Side of E. Stewart Williams at Architecture and Design Exhibit architecture Palm Springs 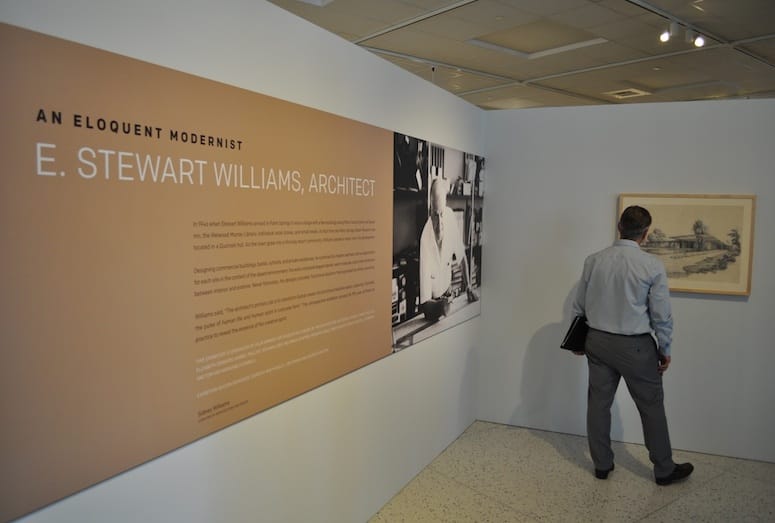 VIDEO: Here is an overview of what you'll see at the E. Stewart Williams exhibit.

You probably know that.

But after viewing the opening exhibition on the famed architect when the newly crowned Palm Springs Art Museum Architecture and Design, Edwards Harris Pavilion opens Nov. 9, you may be surprised to know he was also quite an artist. “He was a really fantastic artist,” says Sidney Williams, curator of architecture and design at the new museum. “So you’ll see in the exhibition water colors, etchings, and all of his drawings that he did of houses or institutions. He had a fantastic eye.”

Sidney Williams has both a professional and personal perspective to share as the wife of Williams’ son, Erik.

“People don’t think of architects as great artists, but he was an artist as well as an architect,” she says.

“He was so passionate about architecture that he was very articulate,” Sidney says. “I called it an eloquent modernist for that reason because he did a lot of public speaking. He went to groups all over Southern California talking about city planning, the need for containing urban sprawl, and having a plan for cities that would be pedestrian friendly.”

During the Nov. 9 opening, there also will be food trucks and musical entertainment from the Los Angeles-based performers String Theory. Sidney answered a few more questions about the exhibition.

What were the items you felt needed to be in the exhibition?

“The drawings are essential to understanding his talent for being such a creative thinker, artist, and architect. We’ll have models in the exhibition. David Webb has made models of four different houses. People like that sense of look into a model and envision the space.

“We have vintage photos by Julius Shuman, which show the buildings when they were first completed.  Julius shot a lot of Stewart’s work. That’s what helped us in restoring this building. He documented his life in his own photography.”

What else can visitors take away from the exhibit?

“I can’t think of too many examples of having an exhibition in a space (the former Santa Fe Savings and Loan building) designed by the person who is being celebrated. People can experience the architecture while experiencing the whole body of his work, which is an interesting combination. And a lot of local people watched the transformation of this building.”

What would he think of all this attention?

"He would be totally overwhelmed. I think he will be so thrilled to see what has happened to the city that there is a lot more interest in architecture now, and a lot more caring about the fabric of the city.”