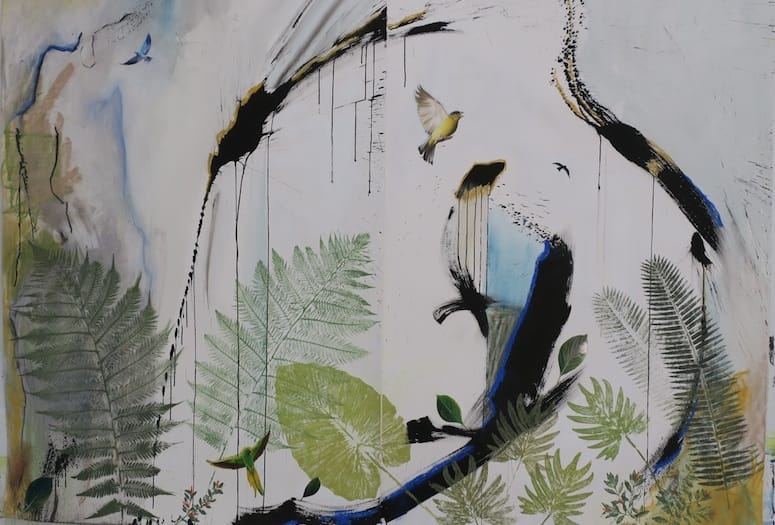 She has a science fiction movie coming out in June, and an Epix comedy series with Nick Nolte in the fall, but these days Emmy-award winning actress Sela Ward is focused on her first passion: visual art.

She recently celebrated the exhibit of about a dozen mixed media pieces at Melissa Morgan Fine Art Gallery in Palm Desert.

Although Ward has been quietly painting her entire life, she's shown only once. It was at a Los Angeles gallery with eight other artists, including Bernie Taupin and Alex Yulish. Actress Sela Ward, who will appear as the President in Independence Day Resurgence set for a late June release, finds comfort in her artwork.

"They were a great group of artists who were so supportive! I had one humongous piece and it was so fun and exciting, I thought I've got to do this again!" Ward says during a recent phone interview.

The Melissa Morgan show came after one of her paintings was spotted at a friend's house. “I have no expectations,” Ward says of the show. “I'm just delighted all the way around! Visual art was my first passion, and it's great to share it with other people!”

At this point in her career, Ward says she would like to spend more time in the visual arts, and would like to earn a master's degree one day.

With the June 24 release of Independence Day Resurgence in which Ward plays a tough-minded U.S. president, and Graves, a political satire with Nick Nolte, Ward balked at discussing current politics.

“It seems like such a circus,” she says with a sigh. “I'm not betting on anyone right now.”

Ward uses her art to seek serenity. Her new mixed-media series with ink washes on paper has been described as “zen like.”

She talked about the black line that crosses some of them.

“It's so much about the world at large, which can be chaotic, unpredictable and frightening,” she says. “My soul needs to be at peace.” Sela Ward's smaller pieces reveal her Yang side, with layers of acrylic, ink, pastel and graphite.

To gain that comfort, Ward paints from her home studio, which has white floors, natural light with the relaxing sounds of a stream nearby. Yet, when she tacks paper to the wall, and applies the ink, she attacks it with great gusto! “That opaque Chinese ink mark is impactful for me," Ward explains.“It resonates with a primitive calligraphy.”

The black line cuts and crosses colors leaving drips and splatters behind them. “It's all about rebirth and redemption,” she says.

The nine smaller pieces in the Melissa Morgan show reveal her Yang side, with layers of acrylic, ink, pastel and graphite.

“We all have a quest for inner stillness while in motion,” Ward says. “I've tried to capture the stillness within a relaxed state of mind.”

With bright colors, bleeding inks, frenetic textures, these images reveal complex ideas. “They are the hidden centers of the universe,” Ward says.