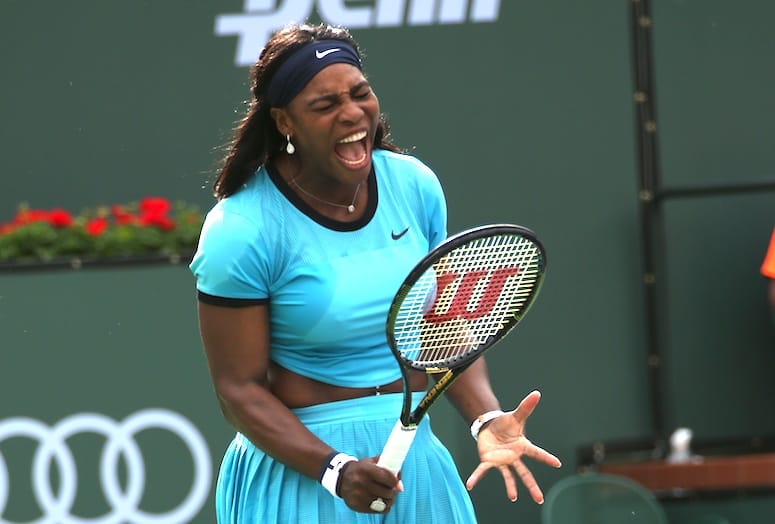 She’s the little sister, the one willing to take chances, make the odd remark, such as the memorable one from the 2009 U.S. Open when she was called for a foot fault — a foot fault! — and berated a lineswoman with language that would make a sailor blush.

Serena Williams has always been more open with her emotions than her older sister, Venus, more willing to offer a pointed comment, or — as after one of her six Wimbledon victories wearing a T-shirt that read across the chest, “Are you looking at my titles?” — have fun at her own expense.

She’s a complex individual who can rip into a tennis ball, as in her wobbly-start, crushing finish, 7-6 (2), 6-0 win over Yulia Putintseva Sunday in the BNP Paribas Open at Indian Wells. Or slice away at a journalist she thinks is being too critical or pesky. Serena Williams has not competed since losing in the Australian Open finals in late January.

She’s the world No. 1, as the public address announcer bellowed several times before the first shot and after the last, and although not outwardly arrogant, the 34-year-old Williams well understands her place in the sport, indeed in all of sports.

When she was asked if, not having competed in an event since a finals loss at the Australian Open the end of January, she wasn’t tournament-ready, returned with, “I’m tournament-ready. I have been playing professional tennis for over 20 years. Yeah, if I’m not tournament-ready now, then I’m never going to be. It’s time to think of other jobs. Maybe I can become a reporter.” Or, because she’s earned more than $175 million in a career that has produced 21 Grand Slam titles  (and a tidy bit more in endorsements; watch her flash those Gatorade bottles), become a newspaper owner. This person does not shy away from attention or high expectations.

Not after last year, when she won the Australian Open, French Open, and Wimbledon, and then, whether it was pressure or simply poor tennis, lost in the semis of the U.S Open to 43rd ranked Roberta Vinci.

“Just having that No. 1 behind my name,” said Williams of her status and excellence, “and even if I didn’t, the 21 Grand Slams behind my name is good, because it makes me feel just good. Just like I like it.” Serena says she doesn't feel like there is any extra pressure on her to win.

When Williams trailed Putintseva, No. 56 in the rankings, five games to three, the fans at Stadium 1 began to cheer. “I’m not used to that,” she said, “because everywhere I go people cheer for the underdog.”

Not everywhere. Mostly outside the U.S.

And about her ability to rally after a slow start.

“I think a lot of top players tend to play better under pressure,” she said. “And I think that’s what makes the difference  …”

It does for Williams, the player at the very top.