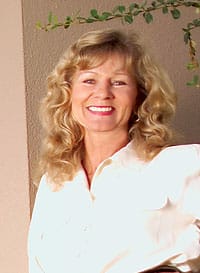 Hi, Sylvia. It’s Brad. The dishwasher is overflowing and there’s water all over the floor!”

Brad is Brad Pitt. Sylvia is Sylvia Schmitt of Bermuda Dunes-based Locations Unlimited, a location provider for film producers, fashion magazines, and other entities. Schmitt placed Pitt and Jennifer Aniston in the quaint and secluded Cree Estate in Cathedral City for Thanksgiving weekend a few years ago. She walked them around the property, explained how everything worked, and then handed over the keys and her home phone number in case they needed anything. They called around 10 p.m. that evening.

Taking a call from Brad Pitt was a pleasure for Schmitt, who had emigrated from Germany to Stockton, Calif., at the age of 17. Trained in medical lab technology but unable to speak English well, she worked briefly for an agricultural lab and then in a quality control lab for Safeway, where she monitored the grocer’s meat processing.

After marriage and a move to Palm Springs, Schmitt went to work for Desert Caravans, which organized corporate outings. She learned about local history, geological formations, flora and fauna, and celebrity homes. In 1986, she struck out on her own, freelancing for destination management companies until 1995. Now she counts those companies among her clients.

These days, Schmitt stays busy looking for places to expand her portfolio of properties available for film and other forms of commercial production — as well as the occasional hideaway or wedding site for celebrities. In September, she was scouting sites for a Disney film starring Ben Affleck.

Studio scouts contact Schmitt with specific guidelines on what their productions need. The Disney script called for a big estate, pre-1980, “something that would belong to a wealthy uncle,” with expansive grounds, and a setting that looked like Las Vegas.

Schmitt spent three days with the scout, setting up appointments and visiting properties, and making cold calls. “It’s amazing how receptive people are, especially when a big name like Disney is used,” she says. “It works very much like real estate. You don’t get paid until something sells — and, in my case, selling a property for a movie project.”

“There really is no mode of advertising that works,” Schmitt says. “It is a tightly connected industry, and the best sources of business come from being nice to location scouts when they come to town and ask you to work for free for three days.

“Eventually, something will work out,” she adds. “It’s good time invested.”

Hundreds of scouts specialize in film or car commercials or some other category, Schmitt says. Rarely do they cross over, but they refer their peers to Schmitt. She also receives numerous referrals from the Inland Empire Film Commission and participates in familiarization trips organized by the commission for location scouts.

Sources for finding properties include real estate magazines and realtors who deal in high-end properties. “I see a lot of property and learn so much about their history,” Schmitt says, noting that she takes her own photographs for presentation folders that are sent around the world (she has several clients in Japan, for instance).

Once she selects a site, Schmitt serves as a liaison between the property owner and the production company. In addition to monitoring the site, however, she helps secure appropriate permits and props, and makes catering arrangements. With vehicles a popular prop, Schmitt developed “a sideline” — she and husband Marty collect antique cars.

Occasionally, clients ask for nonindigenous props, such as snow and pine trees. She found a good substitute for an expanse of snow outside of Twentynine Palms, where a man she knows owns 1,800 acres of dry lake and salt beds. One of Location Unlimited’s fashion clients comes out every summer from England to shoot a Christmas catalog. About 4 p.m. on a Sunday, the day before took them to shoot at the salt flats, the client asked Schmitt for antique wooden skis, which she found on the Internet. She drove down to the seller in Laguna Beach, and the fashion layout turned out beautifully. But Schmitt laughs because the model’s feet were cropped out of the photo. “She was standing in a bucket of ice, because it was 120 degrees out,” Schmitt says.

Another regular client is Victoria’s Secret, which comes out at least once a year to shoot its intimate-wear catalog. “Palm Springs was their first mainland location,” she says.

Schmitt’s expertise didn’t come overnight. “I learned by watching people, by challenges thrown my way,” she says. “To be successful in any business, that’s the way to go about it: from the bottom up.”

Generally, clients pay Schmitt — either on a percentage basis or a flat fee, depending on their budget — only after a location is selected (she also gets film credits). However, some, such as Talbott’s department store, offer a scouting fee.

Like other local businesses, Schmitt is busiest in winter. “When January comes, I work 18-hour days,” she says. During the summer lull years ago, she used the time to put together a celebrity home self-guided tour map, which she updates each summer. The maps are sold at the visitor centers and in gift shops.

Even at $5 apiece, Schmitt would have to sell a lot of maps to come close to what she can make off a place like the Cree Estate, which hosted Christina Applegate’s wedding and where bachelors and the NBC crew stayed for a month during filming of the reality television show Bachelorette. (Schmitt also scouted locations for Boy Meets Boy.)

As for Brad and Jennifer, theire story reached a happy ending. Marty Schmitt called a plumber friend, who initially said he wouldn’t go fix a dishwasher that late at night.

“But it’s for Brad Pitt and Jennifer Aniston,” Schmitt intoned.

Marty convinced the plumber to go. They fixed the dishwasher and then Marty chatted with Aniston until 2 a.m. (Pitt had gone to bed.)

“It was the highlight of his life,” says Sylvia Schmitt.