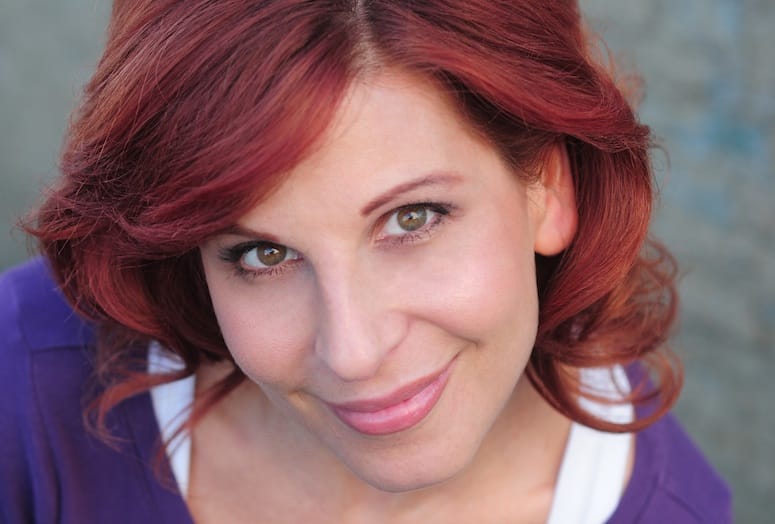 Shawn Pelofsky is getting married.

The comedian says she is ready after chronicling her dating experiences in her “tell all”, The Death of Dating.

As if part of her comedy timing, Pelofsky finished writing the book last summer…just before she met her future husband.

Pelofsky had the opportunity to perform for U.S. troops abroad and says, “I knew I wasn’t gonna pick up an Aghgani boyfriend in a war zone but I did pick up a soldier boyfriend. I’m not so much on dating in LA (Los Angeles).  In LA it’s hard to meet the right person. It’s like the Hunger Games…survival of the fittest.”

Pelofsky doesn’t have to wade in LA’s dating pool any longer as she opens up a new chapter in her life as a married woman.

“As a female comedian, that’s semi-attractive and funny,” she says. “It can be intimidating, but my guy fell in love with me performing. He’s the one gem that gets that. Now I have to write the final chapter of the book because I’m getting married to the one.”

Pelofsky will walk down the aisle right before she brings her brand of humor to The Purple Room May 17 along with fellow comedian Marie Del Prete as part of Blackwell-Black Productions' Comedy Night Palm Springs. Lady Ha Ha
Pelofsky is a comedic force with improv, sketches, and stand-up routines that she characterizes as “brazen and edgy”.  She’s appeared on E’s Chelsea Lately, NBC’s Community, and Showtime’s Lip Service to name a few, and she is known for her hilariously popular rendition of Lady Gaga with her CD entitled, Lady Ha Ha, which is available on iTunes.

She enjoys writing her own material and has captured a huge LGBT following with her jokes that she says, “cater to the gay community”.

“I’m not afraid to get in people’s heads and I write personal jokes for the LGBT community,” she says. “Jokes that I think if you are in the community that you are going to notice or relate to.”

Palm Springs Life had the opportunity to chat with Pelofsky prior to her upcoming show.

Did you grow up funny?
“I grew up Jewish in Oklahoma, so you have no choice to be funny. I was, probably, one out of 10 Jews that existed in Oklahoma. I relied on humor in get by.”

Who inspired you to go into comedy?
“I was big fan of Saturday Night Live. Gilda Radner. Eddie Murphy. But Bette Midler inspired me the most. As far as entertaining, she’s the ultimate entertainer. Watching her concerts and shows on TV… I became enamored of her and inspired to perform.”

What do you consider your Big Break?

Why do you think you appeal to gay guys?
“I think that I after I broke my nose, maybe the fourth time I broke it, I started to resemble Barbra Streisand. So gay men became attracted to me.  I’m a brazen type of female in stand-up. I’m not afraid to take risks and I’m edgy.”

You are known for your ability to nickname. Is this a hereditary gene or a gift?
“I think from being on stage for 15 years as a stand up and using improv skills allows me to work with the audience. My pop culture knowledge and awareness of my surroundings allows me to involve the audience…kind of Don Rickles style as a comedic inspiration. I can work off my feet and nothing says somebody is witty like being impromptu.”

Quick on her Feet