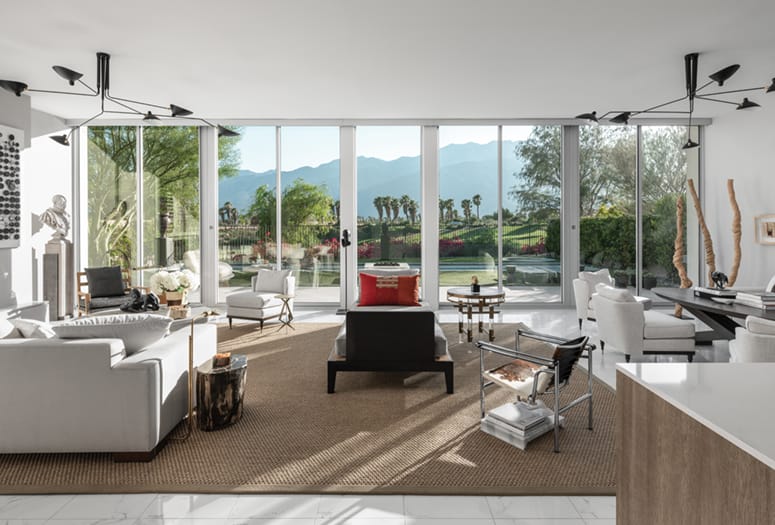 “Being able to look at the San Jacinto Mountains is my favorite part of living in Palm Springs,” Shelly Handman says. “It’s calming, restorative yet powerful. They’ve witnessed so much.”
PHOTOGRAPHS BY LANCE GERBER

An “affinity for balance.” The phrase appears within the first sentence of designer Shelly Handman’s professional bio on his firm’s website. It defines the approach to his Palm Springs home, greets guests within their first few steps inside, and washes like sunlight throughout its glass-walled living quarters. For this native Chicagoan, a balanced home is a home well-lived.

“Symmetry and balance are very calming to the eye,” says the managing principal of Handman Associates, which is headquartered in Chicago with a satellite office in the desert. “The Egyptians had this down to perfection; it can be seen in most of their buildings. That being said, too much emphasis on symmetry can make an interior static and formal. Sometimes throwing in a curveball and being asymmetrical helps bring about a more relaxed and inviting room.”

Paintings and sculpture play a significant part in establishing the right tone, whether for clients or his own home. One of Handman’s favorite works of art in his Palm Springs home is a black-and-white diptych by artist Margaret Boozer. It reads edgy and cosmopolitan — until one factors in its earthy backstory. It is a commissioned piece composed of kiln-dried ceramic discs made from soils gathered around the country.

This sort of intriguing harmony through dissimilarity doesn’t stop at Handman’s interiors. After 40-plus years in the design industry, he appreciates a livelihood grounded in contrasts and savors the opportunity to toggle between extremes. Clients have whisked him from Chicago’s most prominent pockets to California, Florida, Mexico, and Tel Aviv.

Now he’s ready to shift the ratio of time he spends in each office. Not long ago, Handman downsized in Chicago while he upsized in Palm Springs. He relinquished an imposing Lincoln Park condo for a two-bedroom rental in the heart of the city. In the desert, he traded his first home (no view and a “pool-ette”) for an expansive Escena pool-hugger and its “giant unobstructed view.” The tides are turning.

“Right now, it’s three weeks city, one week in Palm Springs,” says Handman of the monthly schedule he plans to reverse. “My Chicago apartment will become a pied-à-terre. I want more of the desert’s tranquility, the starry nights, the natural beauty of being surrounded by mountains on all sides.” 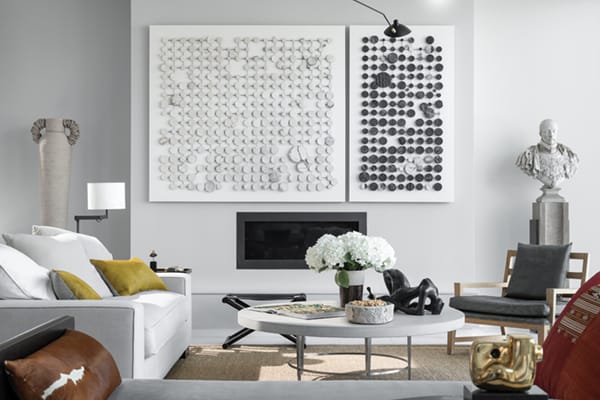 The living room half of the great room groups seating around the fireplace. 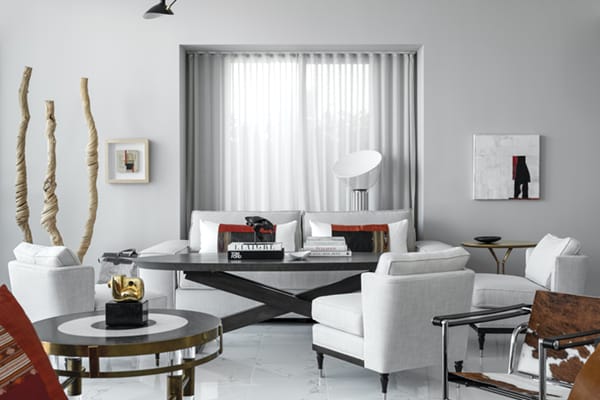 In the dining area half, Handman varies the scale of artwork on each side of the window.

The metaphorical scales he balances, tips, then balances again are on full display at his Palm Springs home. The bold symmetry created by two black Serge Mouille ceiling lamps in the great room is divided in half by a daybed below. While the lounger lines up perfectly within the center pane of glass along the back wall, an area rug pulls the room off center to differentiate the living and dining areas. Above the fireplace, Boozer’s two panels of art in varying widths present a pleasing asymmetry. Yet they are flanked by a symmetrical pair of sculptures in juxtaposed styles. “They balance the wall as a total composition,” the designer notes. Handman’s soothing environments play lightly with perception, without ever jarring it.

Room by room, his choice of organic materials counter urban nuance, neither of which are lost on him. At design school in Chicago, he trained under Rancho Mirage–based Sam Cardella, whose influence is beautifully palpable. Cardella is known for an understated elegance and a preference for natural but unusual textures, and Handman shares these sensibilities.

“I love the interplay of rough-hewn stones, woods, and raw linens, not only as a contrast but as means to soften the more polished shell,” Handman explains. A 36-inch round juniper tree root sculpture makes a gargantuan period at the end of a hallway. Petrified vine sculptures in the dining room serve as an alternative to a live tree, and the 6-foot-tall sculpture by French artist Christian Astuguevieille that sits to the left of the fireplace is made of natural rope.

The home’s subtle, urban quality, akin to a modern loft, is part happenstance. When Handman scaled back in Chicago, much of the furniture he didn’t need came to Palm Springs. “It does take on a city vibe, but I don’t find it too pristine,” he says. “I like unexpected contrasts, if it works.”

It’s hard to imagine these sophisticated spaces  wearing anything but Handman’s handiwork. But the house previously belonged to Andrew Alder, president of the Alta Verde Group, which originally developed Escena and is known for award-winning contemporary properties in L.A. and Palm Springs. “Though it was architecturally significant in design, it was basically a large white box,” Handman says. “My partner thought it looked like a surgical room. I wasn’t about to let that stop me!” 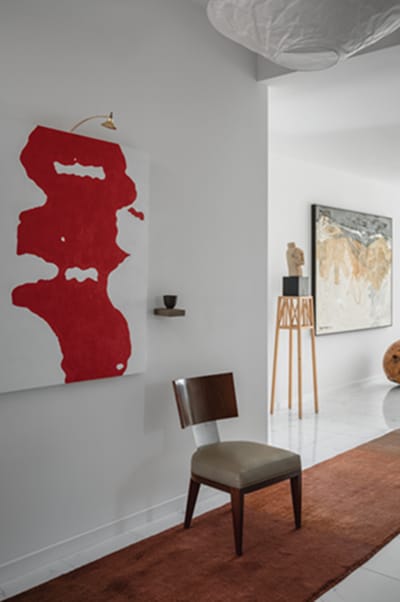 A focal point in the main hall is an acrylic-on-canvas painting by Handman’s partner, David Stephenson. It makes a confident statement as one of the few pieces to deviate from the neutral scheme.

The journey from his first desert home to this new and improved home started 14 years ago on Handman’s first trip to the area. 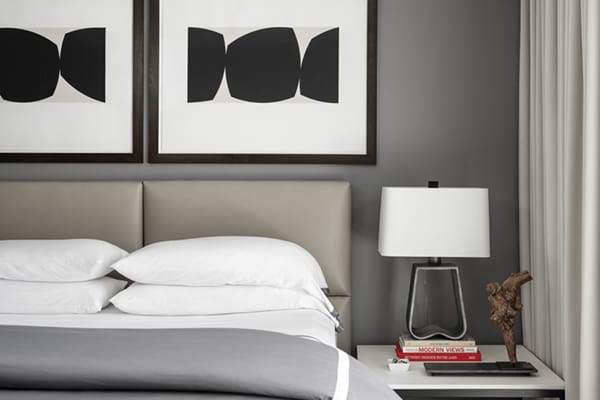 The space between two pieces of art above the bed neatly lines up with the seam of the headboard.

The pair had seen a dozen properties before this one. The moment Handman walked into the great room and was hit with those mountain views through the 40-foot-wide expansion of glass, the search was over. “Being adjacent to a golf course, the only thing between us and the mountains are gently rolling green berms, palm trees, and a few small streams. I knew I could give it the warmth we required to call it home.”

Along with the firm’s project manager Elise Hamilton, Handman set forth. Grasscloth wall coverings in a golden sand hue envelop the personal spaces. Natural linen draperies add visual and acoustical softness to the bedrooms. In the great room, Handman used a “very pale, sun-bleached, grayed-out green” on the walls as a counterpoint to the porcelain floors, bringing a new intimacy to the original ultrawhite space. A single red pillow on the daybed draws the eye to the literal center of the room. It adds an extroverted shout of color against the otherwise quiet palette.

All 55 recessed LED lights were switched out to a warmer 2,700-kelvin temperature, and several adjustable “wall washers” were installed to highlight art and sculpture. One, a red-and-white painting in the main hall, is by artist David Stephenson, who also happens to be Handman’s partner. “He’s always pleased when his pieces ‘make the cut’ for our own home,” Handman laughs. “And many have. There’s probably at least one Stephenson in every room.”

The journey from his first desert home to this new and improved home started 14 years ago on Handman’s first trip to the area. A family of five had outgrown their Rancho Mirage condo and asked him to help build their dream vacation home from the ground up. Standing on the site that first day, he fell in love with the natural beauty before him. On his second trip, he bought a house before he left.

But it was his next home that is his best home. “We always took our guests to the restaurant at Escena,” Handman recalls. “The view is so extraordinary. Now we live right down the street.”

Back in his corner apartment, on the 55th floor of a glass-and-steel high-rise, Handman revels in the duality of it all. “Instead of soaring mountain ranges, I’m looking at Chicago’s soaring iconic architecture,” he says. “To me, opposites are really exciting when each one has its own beauty — and you get to experience them both.”