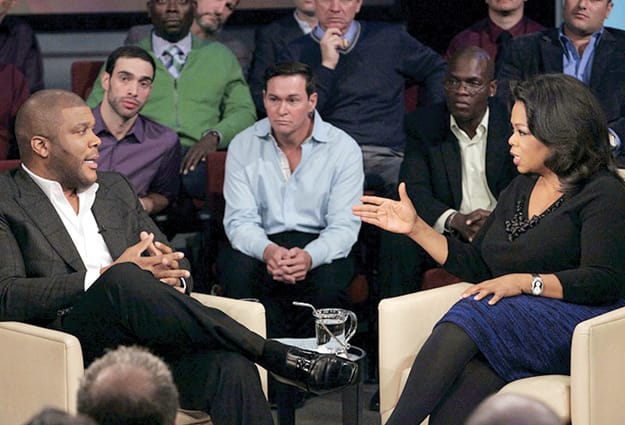 Brian Neil Hoff (center) appeared on "The Oprah Winfrey Show", which won an Emmy for the segment.
THE OPRAH WINFREY SHOW

Independent filmmakers used to dream of gaining a moment on The Oprah Winfrey Show. Palm Springs-based producer Brian Neil Hoff (Enemy Mind, Defcon 2012) realized that opportunity at an unsettling cost: revealing that he was sexually abused as a child.

Neil Hoff wrote "Hunter’s Dove", a screenplay based on his family’s story, after participating in a weekend retreat for men recovering from childhood sexual abuse. “I have an opportunity to make an impact,” he says. “This can help other people who live with this know that they’re not alone and give them the strength to overcome the pain they’re living with.”

Partnering with locally based producer Kim Waltrip (Expecting Mary, Adopt a Sailor) and Jim Casey, principal at Integrated Wealth Management and supporter of filmmaking in the Coachella Valley, Neil Hoff has begun raising $3.5 million to make Hunter’s Dove into a feature film.

The script finds 8-year-old Hunter in what appears to be a model family living in a suburban neighborhood. His father, Neal, an evangelical minister, exudes charisma and authority. His mother, Lynn, seems doting and faithful.

When Neil Hoff talks about the story, the line between real life and screenplay fades. “We had everything,” he says. “We had a nice home in a wonderful neighborhood. I had everything I wanted, but inside I was always in pain.”

Behind the family’s closed doors, evil lurked. In the film, Neal would often enter Hunter’s bedroom late at night and force him to submit to sexual acts. One time, he even forced Hunter and his sister, Cassie, to have sex.

The film follows the real events: Neil Hoff’s mother caught her husband with their 13-year-old daughter, and he was incarcerated for four years. Meanwhile, the family’s trauma worsened, as parishioners turned against them and the legal system denied them therapy and support. The family moved to a small town and concealed the secret.

In the film, Hunter and Cassie grow up into lives of prostitution and drug use. Then a tragic death in the family drives Hunter to seek revenge.

More than 30 years since the abuse, Neil Hoff — whose film Defcon 2012 won Best Science Fiction Film at the 2010 New York Independent Film Festival — feels an obligation to help other men with a similar past. “I hope [the film] helps men from around the world build the courage to face these demons and find resources like [the support organization] Male Survivors, which helped me gain strength,” he says.

"The Oprah Winfrey Show" on which Neil Hoff appeared — “A Two-Day Oprah Show Event: 200 Adult Men Who Were Molested Come Forward” — received an Emmy award at the Fourth Television Academy Honors on May 5 in Beverly Hills.