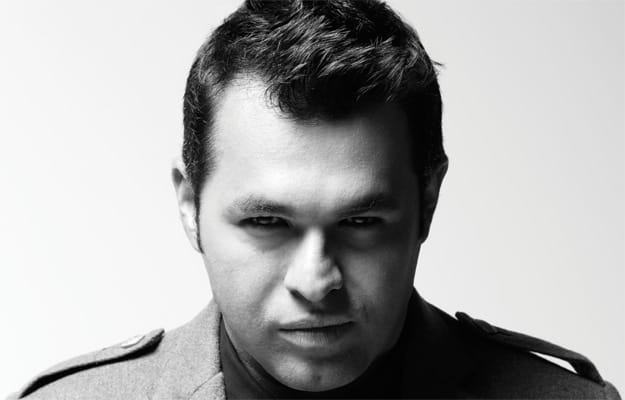 Now a sought-after designer in his own right, Obando also stars as a world-class art director for top advertising firms, including Young and Rubicam and Saatchi & Saatchi. The University of Miami alum masterminded Toyota’s “Let imagination run your life” Super Bowl ad.

The marquee designer for this month’s Fashion Week El Paseo, Obando rolls his fall 2009 collection down the runway on March 28. Style.com compares him only to the great couturier Cristobal Balenciaga.

“He follows in the footsteps of James Galanos,” says Rose Apodaca, author of Style A to Zoe: The Art of Fashion, Beauty & Everything Glamour, who was the first to write about Obando when she was West Coast bureau chief of Women’s Wear Daily.

The high priestess of fashion, Anna Wintour, editor of Vogue, ardently supports Obando — and has almost from the beginning. After only four years in the business, he reached the finals of the 2008 Council of Fashion Designers of American Fashion Awards.

Obando launched his line of celebration raiment in Los Angeles in 2004. He started by buying a few pieces — a Chanel jacket, Pucci pants — at Decades vintage store in Los Angeles and deconstructed them. “I went to Sears for a sewing machine, and I’m still at it,” he says. He continues to design and construct the line himself, only recently hiring his first employee.

Though he went bicoastal with a New York debut last year, Obando plans to stay in Los Angeles. “Here I can have a life. I work in fashion, not for fashion. You won’t lose me to New York,” he says, then laughs as he adds, “You may lose me to Paris.”

The red carpet, a path to fame for other new designers, doesn’t beckon to Obando. “I would rather dress a writer on a book tour,” he says. However, his muse is filmmaker Liz Goldwyn, granddaughter of MGM mogul Samuel Goldwyn. “She is the classic woman, not affected. She makes fashion work for her by mixing old and new.”

“I met JC at a party,” Goldwyn says. “He told me that I was an inspiration. When I looked online at his collection, I was floored. Here was a designer working under the radar, with no formal training, and turning out an impeccably finished and impossibly chic wardrobe.”

“These are works of art,” says Palm Springs Life Fashion Editor Susan Stein of his designs. “There is a coat that took him four months to create.”

A wizard with pleating, Obando also performs tricks with knots and braids. And, oh, the feathers: They can sprout from one shoulder or even from the derriere, suggesting a cheeky bustle. The surface of the four-month-in-the-making navy coat is roughed up in a baffling zigzag manner, achieved by way of hand-sewn chiffon strips.

While working, Obando clears his clothes palate by wearing jeans and a T-shirt. “I know it’s a designer cliché,” he says. When he kicks it up a sartorial notch, he goes for real military jackets scored at flea markets.

He limits his designs to one store per city, including Des Kohan in Los Angeles and Barneys New York in San Francisco and New York.

Priced from $1,500 to $9,000-plus, the clothes aren’t and shouldn’t equate to the down payment of a house, as Obando puts it. And even if fortunes dwindle, he thinks if we really want something, we’ll get it. His fashions offer the rare description of timeless and provocative. He admires the photography of Helmut Newton. “If you don’t provoke in the world of fashion, you’re in the wrong business,” he says.

Obando hails from Barranquilla, Colombia, where he was raised by a family of lawyers. That seaport, by the way, inspired the mystical writings of Nobel prize winner Gabriel Garcia Marquez. Commenting on his literary realm of magical realism, Obando says, “I live in it.”

The young designer (he’ll be 31 next month), acclaimed for his panache, promises to deliver a full extravaganza at Fashion Week El Paseo with the theme “The Siren Versus Hannibal.”