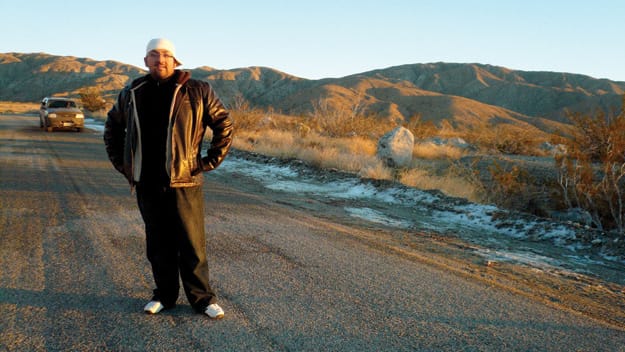 In the Mid-20th Century, Palm Springs earned legendary status as Hollywood’s playground. Now, if a couple of local filmmakers have anything to say about it, the desert resort communities could become Hollywood’s back lot.

For two weeks last December, Christian Sesma and Denise DuBarry Hay shot scenes for a romantic comedy action film. The story of a young couple inadvertently entangled in a jewelry store heist, Shoot the Hero (written by Sesma) is ready for theatrical release.

“We made it for under $3 million, which I think will shock a lot of people,” Sesma says. “It looks like we had a much bigger budget.” He was able to garner an elite cast partly because actors were excited about working in the desert. “The actors were like, ‘Sweet, we get to go play around in Palm Springs for two weeks. I’m there.’”

Sesma, a 32-year-old Palm Springs native, became a film director because his appendix ruptured in 2003. “I was hospitalized for 30 days,” he says. “I had nothing but time, so I just watched TV until I came across Robert Rodriguez’s Ten Minute Film School. I was like, ‘Hmm, I think I’d like to give that a crack.” A year later, he made his first short film, Cycles, which became an official selection at the Palm Springs International Festival of Short Films.

IN THE EARLY 1980s, actress Denise DuBarry Hay, a regular on Black Sheep Squadron, formed a film production company with her husband. “Its purpose was to develop and produce movies for television and feature films, but nothing ever took off,” she says. “In the meantime, I had developed a video, Play the Piano Overnight, with a friend of mine.” The success of Play the Piano led to a lucrative career producing infomercials.

DuBarry Hay’s focus switched in 2006 when she became president of Palm Springs Women in Film and Television, a position she held until this past May. Her primary goal with PSWIFT was to bring the feature-film industry to the Coachella Valley. To that end, she and her colleagues developed a directory listing cast, crew, locations, and other area filmmaking resources. She also began actively searching for feature films to produce in the desert. “It was time to circle around and do what I set out to do 25 years ago,” she says.

Numerous friends and colleagues told her about Sesma and his latest project. By then, he had independently written, produced, and directed a pair of low-budget features, 6:30 and On Bloody Sunday, both of which were picked up by Warner Home Video. He also had assembled a cast and a top-tier cinematographer for Shoot the Hero. “It snowballed on me,” DuBarry Hay says. “There were too many people telling me I should take a look at this, so I did. I really liked the script, the primary cast was in place, and that was it. All he needed was funding.”

DUBARRY HAY AND SESMA agreed on a budget of $3 million and went to work, shooting in and around Palm Springs. “We were working nights the whole time, five at night until five or six in the morning, so the actors would get up in the early afternoon, go sit by the pool and have breakfast,” DuBarry Hay says. “They really enjoyed it.”

Los Angeles-based actor (and former CBS-2 news reporter) Mike Hatton, who plays Thin Smith in the film, says, “Shooting in the desert, the vibe is very different. Everything is chilled out, relaxed, and cool. Everybody gets along; there’s not a lot of drama. … In L.A., it’s more like a day of work, like you’re at the office. In the desert, it totally feels like vacation time.”

DuBarry Hay and Sesma plan to make more films in the desert. “I’m writing my own stories, and you write what you know,” Sesma says. “All of my reference points as a writer are here, so my stories are also here.”

The Coachella Valley Economic Partnership also is working on bringing more film business to the area, though individual city governments have been slow to join in the effort. Palm Springs still charges permit fees for filming; elsewhere, such fees are nearly always waived for feature films.

“The community is ready for this,” DuBarry Hay says. “We’ve got great locations here, and the place is becoming more and more film friendly. A lot of our cast and crew were locally based. We didn’t have to import them and pay hotel bills and per diem. We used a lot of other local resources, too, from hotels to studios to Coachella Valley Ice, who created snow for us when we needed to match a scene in Desert Hot Springs to a scene we’d shot up in Joshua Tree.”

“We definitely want to see more and bigger-budget films being shot in the desert,” Sesma says. “We showed with Shoot the Hero that we can bring A-list talent here to work. Not to visit, to work. That’s a big deal.”