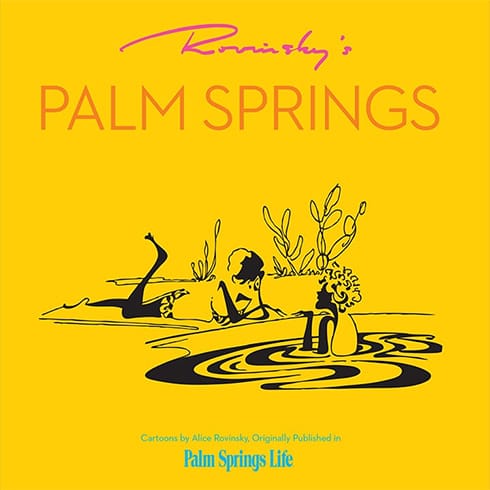 Alice Rovinsky created “Rovinsky’s Palm Springs,” a series of topical cartoons that appeared in Palm Springs Life magazine in the late 1960s and 70s. Sophisticated, witty and always entertaining, the popular cartoons really created a distinctive world of their own conjured out of the desert’s lifestyle and social scene.

The little artworks capture the essence of a specific time in the desert gleaned by an astute observer with incredible stylistic flare. But surprisingly little is known about Rovinsky herself.

Garden City Books of New York published an imaginative and innovative children’s book in 1951, illustrated by Rovinsky entitled “Look at Me!” (Ironically, Alice herself it seems wanted to be unseen.)
There was “A See Yourself Book for Boys” (and one “for Girls.”) Parents would paste a child's photo in the designated spot inside the back cover and as the child turned the pages he would see his face, through a hole cut in each page. Around his pasted-in picture, Rovinsky’s illustrations would transport the lucky child to a future world where might explore what he wanted to be when he grew up: a pilot, policeman, or railroad conductor.

Look at me, and you will see,
All the things I'd like to be.
If I were a fireman brave,
Folks in danger I would save!
To be a cowboy, Bronco Bill,
That would give me such a thrill!

Publishers Weekly called the books "A delightful novelty."
The Honolulu Advertiser February 1947 carried an item about a prominent pediatrician’s new book, “Pointers for Parents,” that promised to “take away frowns….” if those pointers were taken to heart.

“Dr. Lozier writes that ‘the destiny of every child is largely in the hands of his parents—don’t blunder—know what to do and do it.’ His book is attractive and contains gay illustrations by Alice Rovinsky. There are charts and records, useful to parents. Contents deal with feeding, sleep and rest, bathing and hygiene, teeth, clothing, exercise and play, physical growth, illness, bad habits and what to do about them, discipline, character training, teenage problems, adolescence and marriage.” Each life stage and topic extracted to its essence by Rovinsky.

It seems she grew up in New York. Her mother, Ida Badanes Rovinsky, was a physician in Boston in 1897, and achieved some notoriety for writing Yiddish plays in New York in the early 20th century. Her father was an Anglo-Russian writer, on medical topics, Dr. Aleksander Rovinsky, and died in 1931.

How exactly and why Alice Rovinsky got to Los Angeles, and then Palm Springs, remains a bit of a mystery. It appears it was by way of Paris with her mother. They arrived in Los Angeles May 12, 1939 from Rotterdam.

But by the 1960s she was in the desert and counted Milt Jones, the publisher of Palm Springs Life magazine, a friend.

She began submitting her amusing vignettes about desert life to Milt for publication. Her black and white drawings were distinctive and whimsical. They poked fun at the socialites, golfers and shoppers who inundated the town in the season. She depicted people floating in pools, swanky midcentury houses, lots of palm trees, tony store fronts, and fashions, commonplace in Palm Springs, that would have been totally outlandish anywhere else.

Her original drawings are truly works of art. Over the two-decade course of their publication, the cartoons grew to full page format in the magazine. She produced scores of unique images over the years.

Alice herself seems to have been quite private, even reclusive. A distant relative came from the east coast to visit a few times with their young son. The last time, they were disappointed and saddened to find the coroner had sealed her door, barring entry. A small obituary, hardly noticed, appeared in The Desert Sun.

Rovinsky had given her drawings to her friend Milt, for the joy of seeing them published and the fun of spoofing wealthy visitors and their leisure pursuits in the sun. She had an uncanny sense of the silliness of it all and the gentle teasing for which her stylish rendering was perfectly suited.

Her original drawings languished in a file cabinet for decades until finally discovered as long-buried treasure and published as a diminutive coffee table book. Flipping through the pages conjures up a most delightful sense of the fun of the desert and makes it easy to imagine the world according to Rovinsky, her particular view of Palm Springs. 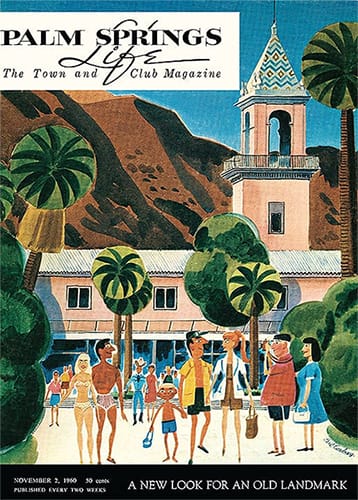 Earl Cordrey (1902-1977), a founder of Palm Springs Life and celebrated illustrator, designed the original logo and the cover for the premiere issue, March 20, 1958.

He continued to illustrated covers and other art for the magazine until the mid-1960s. 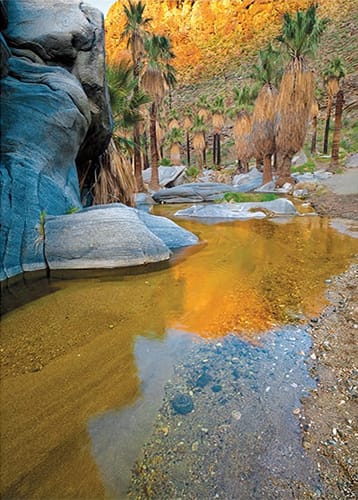 Tom Brewster, a longtime Palm Springs resident, worked for 25 years as a photojournalist, sports photographer, and freelancer for publications around the world before indulging his passion for desert beauty. Palm Springs Life has featured his landscape photography for more than 30 years and counting — especially pioneering views of the Santa Rosa and San Jacinto Mountains National Monument.

He is a graduate of the School of Journalism at University of Missouri and has published a book, Portrait of Palm Springs.