ShortFest 2019 Winners: You May See Them at the Oscars 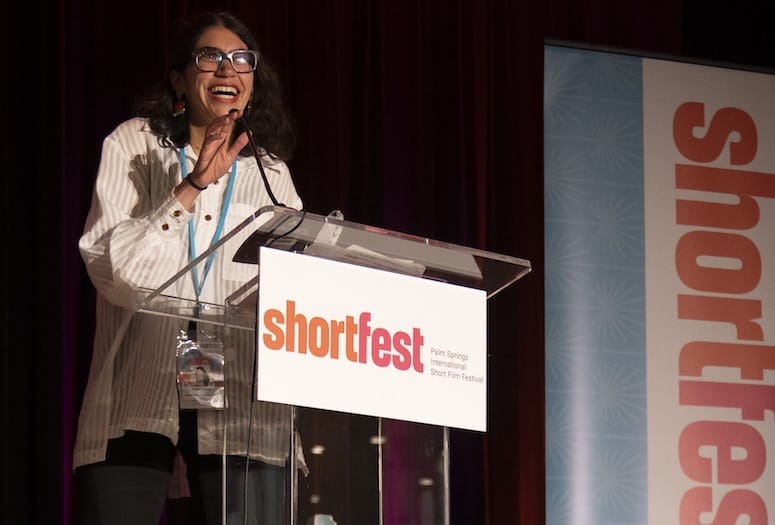 This may not be the last time you hear from the filmmakers whose work was shown during the recent 2019 Palm Springs International ShortFest, the largest short film festival and only short film market in North America.

More than 360 short films screened throughout the festival along with approximately 5,600 of filmmaker submissions available in the film market.  More than $86,000 in prizes, including $26,750 in cash awards were awarded in 22 categories.

BEST OF FESTIVAL AWARD – Winner received $5,000 cash prize courtesy of the Greater Palm Springs Convention & Visitors Bureau.  Awarded by the International Jury to a student or non-student short. The winner of this award may be eligible to submit their short to the Academy of Motion Picture Arts and Sciences for Oscar® consideration.

The Christmas Gift (Romania/Spain), directed by Bogdan Muresanu
A few days after Ceausescu’s bloody repression in Timisoara, a father’s quiet evening turns to panic as he finds out that his son has mailed a letter to Santa that includes something for him — his wish to see Ceausescu dead.

BEST INTERNATIONAL SHORT – Winner received a $2,000 cash prize. Awarded by the International Jury to the best student or non-student short produced outside of North America.

King Wah (I Think I Love You) (USA), director Horatio Baltz
A disgruntled delivery man, a woman with chronic déjà vu, Pat Sajak, and a slow dance in a Chinese takeout restaurant.

BEST U.S. SHORT – Winner received camera package courtesy of Panavision, valued at $60,000. Awarded by the international jury to the best student or non-student short produced in the U.S.

Manila is Full of Men Named Boy (USA/Philippines), director Andrew Stephen Lee
Manila, July 7, 2009. As Michael Jackson’s televised funeral plays throughout the country despite terrorist attacks in the south, an estranged son, to impress his father, purchases a child who can drink and smoke

For the following awards, all first-place winners received a cash award of $2,000 and may be eligible to submit their film to the Academy of Motion Picture Arts and Sciences for Oscar consideration.

Summer Hit (Germany), director Berthold Wahjudi
Laia from Spain and Emil from Iceland are enjoying their semester abroad in Munich. While Laia feels perfectly fine just having sex with Emil, his profession of deeper feelings puts her on the defensive.

Inferno (Australia/Mexico), Director Patrick Fileti
An explosive portrait of the lives of artisans and their families in the lead up to the festival of San Juan de Dios, when blazing revelry engulfs the town of Tultepec, Mexico, famous for its pyrotechnics industry.

STUDENT COMPETITION
All first-place winners in these categories received a $500 cash prize.

Nosis (Germany), director Vincenz Neuhaus
When a boy with an exceptionally long nose accidentally falls into a cake, his life changes in unforeseen ways and drives him to re-explore life no matter the dark consequences.

A Little Break (France), director Louise Groult
Accompanying her cousin on a camping trip to coastal Normandy, 16-year-old Charlotte discovers that the path to romantic fulfillment can be painful for a young woman in an insensitive world.

Special Mention:
What Do You Know About the Water and the Moon (China), director Jian Luo
During an abortion, instead of aborting the fetus, a girl gives birth to a live jellyfish.

Night Swim (USA), director Victoria Rivera
Three teenage girls break into a closed-off pool on a hot summer night, but when unwanted guests show up, their friendship is tested and one of them is left behind.

Special Mention:
Sir Thomas (Israel), director Raanan Fogel, Michael Amir
A young man finally gets to go home with the girl he has a crush on. Unfortunately, Sir Thomas does not seem to want to cooperate.

Seeds of Deceit (Netherlands), director Miriam Guttmann
In a shocking breach of trust and ethics, famed Dutch fertility doctor Jan Karbaat inseminated dozens of unsuspecting patients with his own sperm. Seeds of Deceit considers the resulting anger, sadness and curiosity through the testimony of two mothers and their children.

VIMEO STAFF PICK AWARD – Selected by Vimeo curators. Films featured in competition are eligible for the award, which includes a $2,500 cash prize.

The Culture (Norway), director Ernst De Geer
It’s the opening night at the concert house where Arvid works. When his sister steals the spotlight and a resulting confrontation with an important man builds, Arvid’s worst side is revealed.

BRIDGING THE BORDERS AWARD PRESENTED BY CINEMA WITHOUT BORDERS – Winner received a $2,500 courtesy of Go Energistics. Awarded by the Cinema Without Borders jury to the short that is most successful in bridging and connecting the people of our world closer together.

Ahmed’s Song (France), director Foued Mansour
One day Ahmed, employed at the public baths and nearing retirement, encounters Mike, a teenager adrift. Inside the bathhouse walls, in a place on the verge of disappearing, a strange relationship will develop between these two fractured souls.

FUTURE FILMMAKER AWARD – Winner received a $1,000 cash prize.  Honors a non-student filmmaker whose work demonstrates that they are poised to take a significant next step in their career.

sometimes, i think about dying (USA), director Stefanie Abel Horowitz
Fran is thinking about dying, but a man in the office might want to date her.

Special Mention:
Magnetic Harvest (France), director Marine Levéel
Mickaël, a pig farmer in rural France, finds his search for an amorous connection interrupted by the sudden return of the charming and youthful Paul.

BEST EMERGING STUDENT FILMMAKER – Winner received a $1,000 cash prize. Awarded by the ShortFest programmers. Honors a student filmmaker whose work and vision point to a bright, prospective career in cinema.

Stone Age (Switzerland), director Lou Rambert Preiss
In a vast stone quarry, an explosion reveals an object from the past.

Special Mention:
Truck Slut (USA), director Ryan Craver
A lonely, gay 13-year-old reflects on his complicated love for his volatile sister, the night she humiliated him, and her disappearance from their small, Southern town.