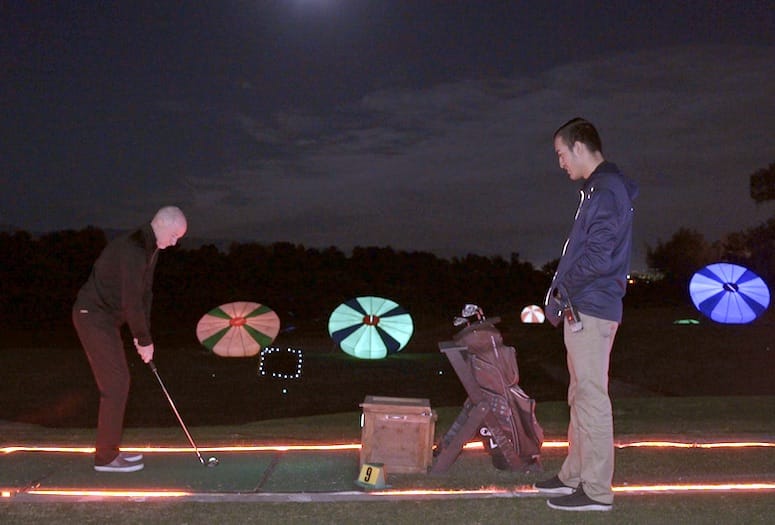 Golfers take aim at lighted targets as part of the "Shots in the Dark" experience at Indian Wells Golf Resort.
PHOTOGRAPHS BY STEVEN SALISBURY

Add golf to an after-dark mix of music, lights, great food and drink, and a par-tay vibe, and the irresistible result is “Shots in the Night”, the fun new must-try experience in the Coachella Valley.
Since opening at Indian Wells Golf Resort a couple of months ago, the response to “Shots in the Night” has surpassed expectations, according to the resort’s general manager Steven Rosen.

“It’s been wildly successful,” Rosen says, “not only as a different opportunity for something to do in the desert but also as a pretty cool opportunity to experience the game of golf in a non-threatening way. If you’re not a golfer, it can be a pretty scary thing to just step out onto a course. We’re offering a much more welcoming way into this great sport.”

VIDEO: Watch to find out why “Shots in the Dark” participants find it an attractive thing to do.

Looking around the colorfully-lit layout on a recent evening, groups play games on the expansive putting course chosen from a menu accessed through computer tablets. Over on the driving range, players take turns at hitting glow golf balls at big, lighted balloon targets at distances of 30 to 140 yards with top-of-the-line clubs provided to them by the staff. There’s a deejay keeping the music in a bright pop dance groove, a food truck offering a tempting casual menu, a full bar, and comfortable couches and chairs where groups are kicking back and enjoying some people-watching.

R.J. Neild had come up from El Centro to spend the weekend golfing in the valley and heard about the opportunity to still play at night.

“If you’re a golfer, this is a different way to not only hone your skills but have fun with them,” Neild says. “I’d recommend this for golfers and non-golfers; it’s a fun time, it’s not expensive, and a really enjoyable evening.”

Developed by IWGR in association with a golf-tech entrepreneur, “Shots in the Night” has been drawing what Rosen describes as an “all-ages, all-demographics” crowd to its Thursday, Friday, and Saturday night sessions, which will be running during the desert’s peak season until May 18. Play will suspend for the summer at that point (except private parties will be booked through mid-June), and return in mid-October after overseeding is done, according to Michael Tebbetts, director of sales and marketing for Indian Wells Golf Resort. 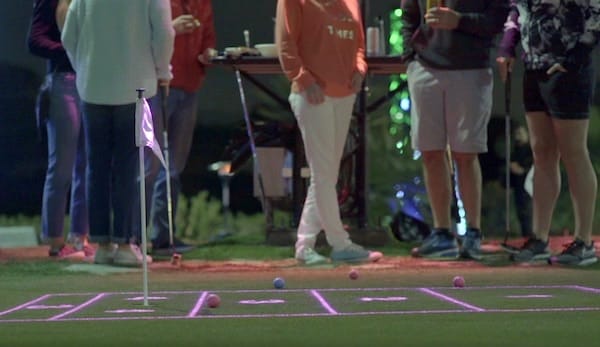 “We’re seeing golfers come in off the course wanting to have some fun and relax. We’re seeing girls-night-out groups, guy groups, after-conference corporate groups. And we’re seeing lots of parents with kids — non-golfer parents as well as golfers,” Rosen says.

And why not — who doesn’t like to hit a ball with a marvelous stick specifically engineered to hit that ball with? That, after all, is the fundamental attraction of golf. But it’s often lost as the industry — country clubs, public courses, equipment manufacturers — grapples with the challenge of reaching new generations and increasing participation.

“What we’re doing with ‘Shots in the Night’ represents an opportunity for an industry that wasn’t growing in leaps and bounds,” Rosen says, “The entertainment side is a little bit of the answer. Shots is fun for golfers and incredibly entertaining for non-golfers. It might not be a cure-all, but it’s certainly part of the fix of getting to a demographic we’re not otherwise reaching. You might just like it — and come back and take a lesson.”

L.A.’s Billy Gushue belongs to that demographic, and he found Shots to be “awesome.” “It’s really fun, and it helps build the game of golf for the younger generation who like doing this stuff,” he says.

PGA professional Matt Balesteri, who has been at IWGR for a little over a decade and now directs the resort’s night golf operations, had expected more of a “strictly golfer clientele” to show up at Shots. So the mixed crowds have been a pleasant surprise for him.

“I love to see all the newcomers giving it a try,” he says. “What I’ve enjoyed most about what we’re doing here is watching folks, who probably never thought of golf as being for them at all, take a first step to adding themselves to the game. It happens every night, and it’s awesome.” 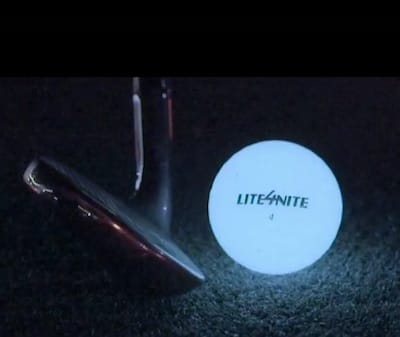 IWGR is the exclusive licensee of the “Shots in the Night” concept in the Coachella Valley and one of the first facilities nationwide to roll it out. Based on its early success, Rosen and Balesteri say Shots is here to stay, especially as they tweak, refine, and (hopefully) perfect their “golf-tainment” experience.

“’Shots in the Night’ is an entry to golf in a fun way,” Rosen sums up. “This really is the next step to help develop and grow the game.”