With a backdrop of White Party Palm Springs' Saturday night dance at the Convention Center, Marshall Pearcy (left) and Douglas Woodmansee (far right) have been attending the gay festival since its early years.
PHOTOS COURTESY OF WHITE PARTY PALM SPRINGS

The moment is precious.

Less than 24 hours after parading through a sea of men at the Convention Center, attracting second looks as much for their outlandish outfits as being on the high end of the age scale for this event, Marshall Pearcy and Douglas Woodmansee (aka Dottie DuBois and Maude Chapeau, respectively), return Sunday for White Party Palm Springs’ Tea Party sans drag.

“When we say, ‘Hi,’ or we stop somebody that we recognize and we get this, ‘Why are you stopping me? Who are you?’ said Woodmansee.

“Because I’m the one who really remembers more of who they are from one night to the next, and I’ll say, ‘Last night, you thought we were beauuuuutiful,’ but today?” Pearcy chimed in. “And they’ll look at us and you can see their mind, ‘Tick, tick, tick.’ And then it’s like, ‘Oh my,’ cause I’ll say something like, ‘Last night I had pink hair.’ And they’ll go (gasping noise). They grab all their friends, they identify us, and I like that because we’re not 20 years old but we’re at the party … And it’s okay.”

The Palm Springs couple has been fixtures at the annual celebration that has become one of the largest gay festivals in the country. White Party Palm Springs began 28 years ago as a way for founder Jeffrey Sanker to congregate with friends for a desert escape and now attracts upwards of 30,000 men every year.

Pearcy and Woodmansee, who moved to Palm Springs 36 years ago from Los Angeles, were part of the White Party’s early years after being encouraged to attend by friends who had followed their act, Les Dames Du Soleil, which ran for more than 20 years and helped raise more than a million dollars for Desert AIDS Project. 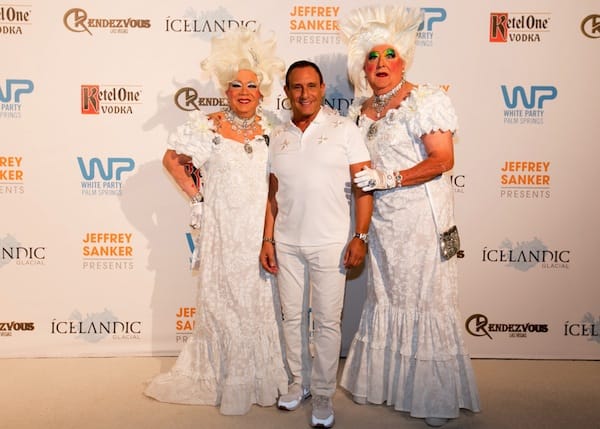 Marshall Pearcy (left) and Douglas Woodmansee (right) pose on the white carpet with White Party founder Jeffrey Sanker. Sanker says when he first met the Palm Springs couple and later saw them sans drag, he wasn’t sure if they were one in the same. “I did, and I didn’t! It was one of those moments that you are like ‘I know you from somewhere’…. then I figured it out! And I loved it!”

“And everyone was saying, ‘Well, you know it’s only for the young queens and all that,” Pearcy recalled. “And Douglas said, ‘Well, I don’t want to go there and be an old queen. And I said, ‘Let’s go as old drag queens, and that way we can become personalities.’”

They made an immediate impression on Sanker from the start. “They stood out to me because White Party has always been about creativity, originality, and being yourself, and they really exemplified that,” Sanker said. “I am always astounded by our guests that go the extra mile in theming, costuming, and really being a part of the show. I found myself looking forward to seeing them each year.”

They are likely one of the most photographed couples at White Party, appearing on the white carpet prior to Saturday night’s dance and on the cell phones of countless others.

While White Party may draw a younger audience, Sanker believes Pearcy and Woodmansee’s presence underlines the festival’s greater purpose. Woodmansee is retired and Pearcy is a hair stylist. 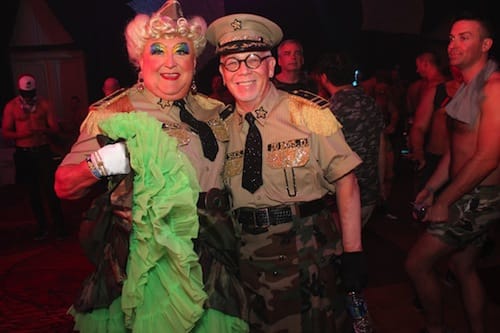 Douglas Woodmansee (left) and Marshall Pearcy can dress for any theme at White Party Palm Springs.

“I think that White Party has always been a rite of passage for a lot of younger guys, but I also feel like it cultivates relationships and friendships with attendees who come year after year,” Sanker said. “That sense of community (especially in places where being LGBT may be difficult or where they feel isolated – unlike Palm Springs)  is a testament to the fact that White Party has something for everyone. I think their presence is inspiring to all ages, not just the younger attendees, and shows that having fun and being yourself knows no age, no boundary, and no limit! They certainly dress up my party, and are some of my favorite ornaments on the glittery production that is White Party. I cannot thank them enough for that.”

And the couple doesn’t expect their commitment to White Party to end any time soon just because they are growing older.

“So we’ll be spray painting our walkers white,” Pearcy said. “We can’t stop, we’ve had too many people say, ‘No, you’re our inspiration, we say if you can do it, we can. If you can keep doing it, we can.’ I think, ‘Well, I’m in the mood to keep doing it …”

• White Party Palm Springs Gets Its Om On