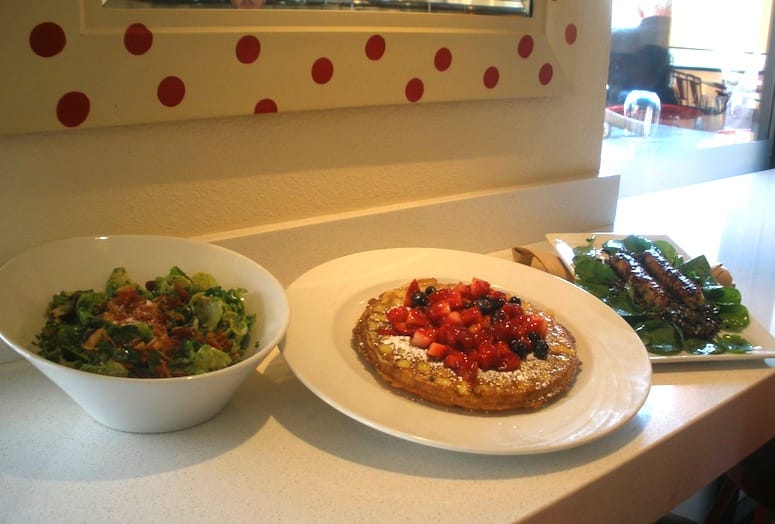 Parking is becoming a challenge at the Albertson’s Shopping Center in Rancho Mirage.

And that’s good news for Si Bon Belgian Bistro, which opened six months ago and has been building a following ever since.

Belgian-born chef Philippe Caupain and his wife, Edith, are having fun with this little corner place from adding an outdoor patio, livening up the interior with butter yellow walls and bright red chairs, to creating new dishes.

Dressing up the Place

“It’s nice to have your own place,” says Edith. “It’s fun to do something you like, such as add a plant here, or a painting there.”

New touches to the décor include hand-painted murals of Brussels’s famous flower market around an alcove of windows.

“I wanted to accent the yellows and reds in the restaurant with the flowers in the mural,” she said.

Philippe has been busy creating even more new items – some popular specials have now landed on the regular menu — and Si Bon expanded operations and added breakfast on weekdays.

After Nov. 1, they will be open daily for breakfast, lunch and dinner.

“We just opened for breakfast last week; people don’t yet know about it,” says Philippe.

The word will spread once folks realize that the authentic Belgian waffles are served with maple syrup, stuffed with mango and topped with caramelized berries, or served Benedict style starting at 8 a.m.

Crepes, waffles and brioche are the basis of Si Bon’s lunch menu. Philippe’s original idea was to use savory Belgian waffles as a base for creative open-faced sandwiches and appetizers such as his 9-holers escargot waffles. A choice of waffler or toasted brioche is given for any sandwich.

Consider this: Angus burger on brioche with grilled Maui onions and aged cheddar. Si Bon’s chilled chicken and berries salad with Maytag blue cheese is dressed in a citrus vinaigrette.

Or this: Lobster “taco” wrapped in a savory waffle topped with avocado and mango salsa.

For Philippe, experimenting with new dishes on daily specials has been the most fun.

“Some of the specials, like the stuffed sole with lobster in citrus beurre blanc, have been so popular, they’re going on the regular menu,” he says.

Philippe created a house-made chicken sausage that now also appears as an appetizer grilled and served on green lentil framed with watercress leaves, drizzled with sweet balsamic reduction. An unusual use of Brussels sprout leaves as a salad makes a substantial and healthy lunch dish, tossed with roasted maple bacon, candied walnuts and cranberries.

“The leaves are removed from the sprouts, blanched, and then iced,” explains Edith. “We use all fresh ingredients for everything.”

Another popular lunch dish: chopped lobster salad with a mustard and tarragon dressing.

Sweets are where the crepes and waffles really show off. The Belgian chocolate waffle brulée is a frontrunner, until you’ve tried the waffle pie with custard and fresh berries. The crispy, warmed waffle acts like a crust based, with a light custard filling the holes, then topped with caramelized fresh blue berries, raspberries and strawberries.