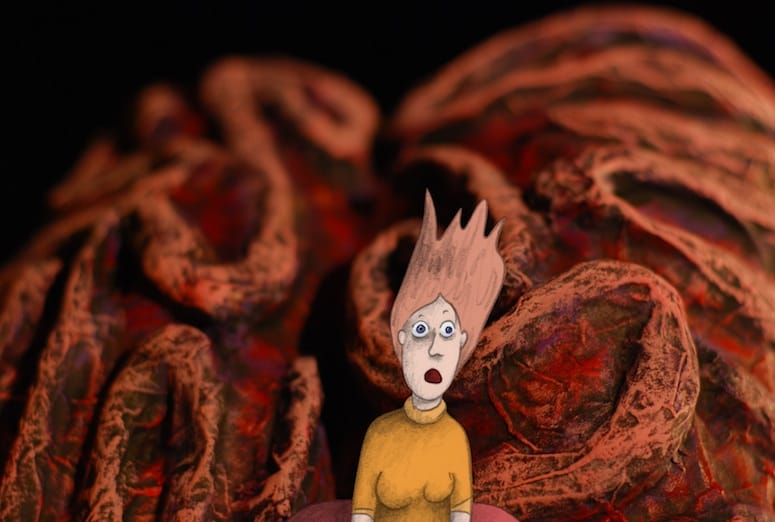 Signe Baumane could have felt trapped in her family’s history of debilitating depression.

But through her work as an animator, Baumane found her freedom to produce Rocks in My Pockets, which screens today (Jan. 5) and again Jan. 7 – both at Palm Springs Regal 9 theaters – during the Palm Springs International Film Festival. The festival runs thrugh Jan. 12..

The story is based on Baumane’s own family, focusing on the women, including herself, and their battles with depression that were in many cases hushed up and never talked about.

The film has been chosen as Latvia’s entry for Oscar consideration in the best foreign film category. Baumane has been an animator for more than 20 years, and no other medium seemed appropriate when she decided to tell this story. “Animation is such a versatile medium,” Baumane says. “You don't have to just have a comedy animation or a children's film, you can do anything you want. It's interesting that people dismiss animation, and yet animation is a very liberating medium. Everybody thinks it's for children. I don't know. I think that animation is a greatly underestimated or misunderstood medium of our time.”

Baumane, who will conduct a Q&A after today’s (Jan. 5) screening, spoke with Palm Springs Life prior to her arrival in the desert.

When you were making the film did the experience ever become too personal for you, to the point that maybe you thought, "I can't do this," or, "I need to take a step back"? Or was it actually helpful for you to do this?

“First, I want to know that I don't make films to cure myself or to feel better about myself. I make films for other people. I make films to engage with other people, to kind of provoke them, to show them my point of view on the world that's just kind of outside of the mainstream point of view. That's the driving force. That's what drives me to make films. As to your first part of your question was that, when I made the film, when I wrote the script, I didn't ever realize the whole … what the consequences would be. I was writing the script, I was telling the story as if I was telling it to a friend. That's how I was telling it. I felt safe, and I was not censoring anything.”

How did animation allow you to show depression to the audience?

“In animation you can walk anywhere you want, you can do anything you want. There are so many things you can do in animation, whereas in live action you can't really, let's say, enter a person's head directly. You can have like a voiceover that says what this person is thinking, but you can't really show visually. I feel that animation, in that regard, is kind of a perfect medium. To show confusion in live action, they just spin the camera more or they blur everything, because that's what they do. In animation, you can actually show confusion of the character, or you can show depression of the character, or you can show madness as a separate character from the main character.” "Rocks in My Pockets" is Latvia’s entry for Oscar consideration in the best foreign film category.

What was the greatest obstacle you encountered in making this film?

There was a theatre director, Sturgis Warner, who later became co-producer, and one thing he pointed out in the very beginning, he said, ‘You have to write how you feel from inside.’ I was very resistant to do it. I was like, ‘I will never, I don't want to go there.’ For me, to write about how it feels about depression, how depression feels from inside, it means to go inside there. But once you access that state of mind, then you have it.”

What did your family think of the film?

“I have some things that are not resolved regarding my family. First is that my dad will never … he would still not say how my grandmother died. Nobody will talk about it. He went to see the film and we got back from the movie. He loves the movie and he thinks it's an important film, and we sat at his kitchen table and I asked him, ‘So, can you tell me now how your mother died?’ He looks out and then, ‘No. It's going to rain and I have to cover some things up.’ And he walked out. When we premiered in Latvia, everybody, like 600 people showed for the premiere, and 60 of them are my relatives. Then, I was thinking they would say one thing, some kind of verdict what they thought, but it's a family that really doesn't like to talk openly about things. There were like maybe little grumblings, but I haven't gotten consensus if they have forgiven me.”

Has your film opened any discussion in Latvia about mental illness and depression?

“This is a country that is behind maybe about talking about these things. To me, that was the importance of the film – that it's part of people's lives. The film doesn't really say what side should you take, medication or not. It says that I had a bad experience with it. I think if you know your family history, if you know what you're prone to you could recognize the symptoms before they could take hold of you. You can take charge of your life sooner, before you get crushed by mental illness or by this system, the medical system that may destroy you.”