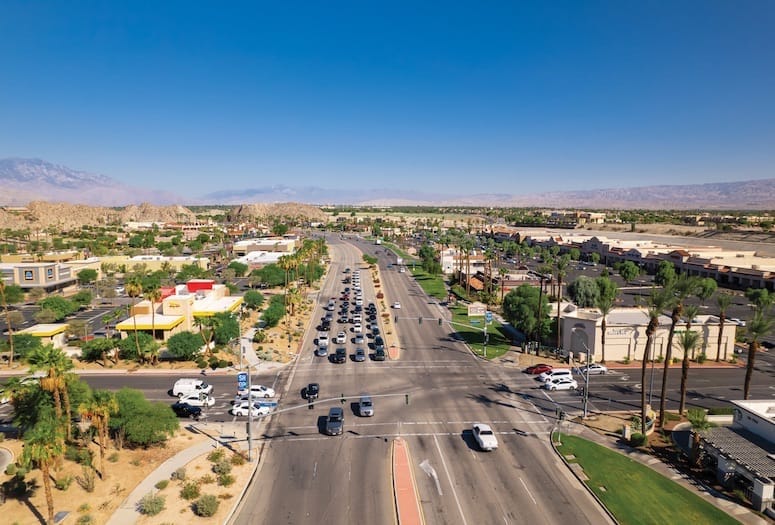 The citywide public safety camera system is now live with more than 100 cameras installed at all intersections, parks and city buildings.
PHOTOGRAPHS BY CHRIS MILLER/IMAGINE IMAGERY

Positive, continued progress was the theme for the City of La Quinta this past year. The highlights include the opening of the 108-room Residence Inn on Highway 111 near Costco, a handful of new restaurants, retail shops and services and the debut of an event park at SilverRock Resort. The unveiling of the event venue couldn’t have come at a better time as the city plans to host a 40th-anniversary community celebration in May 2022.

Among the tasty new options, La Quinta residents were jazzed to get a java jolt from the renowned Dutch Bros Coffee. Edward Hamer and his wife, Alyssa, moved to La Quinta from Eugene, Oregon, in late 2020 to open the desert’s first Dutch Bros location at Jefferson Street and Fred Waring Drive. They have since opened another valley shop. A graduate of the University of Washington, Hamer appreciated his coffee experience with this company during his high school and college days and began working there as a barista in 2011. “I am impressed with Dutch Bros’ philanthropic mission and that it isn’t “a turn and burn” coffee shop,” he said. If you’ve been to the La Quinta shop, you know that even though it’s a drive-through-only location, there is face-to-face interaction with the cheerful baristas who even take orders outside to keep the flow going.

“It’s been so busy since we opened,” said Hamer, noting the La Quinta store’s status among the more than 480 Western regional franchises in less than a year of its opening. “We are in the top three of the company as far as sales go,” he stated. “It shows this customer base was super ready for us to be here.”

¡Olé! La Quinta also has a new Mexican restaurant — Los Arcos, which opened this past May in the former Pizza Hut building in La Quinta Village Shopping Center. The family-owned restaurant is thrilled to have a long-term location to serve customers their flavorful cuisine, including their signature Chicken Mole dish, having signed a five-year lease with the option for renewal. Formerly in Cathedral City, they were outed twice due to landlord sale of buildings. The idea for the restaurant came from Jesus Almaraz. He and his father, Octavio, initially opened their restaurant in 2015. Brothers Christopher, Bryant and Steven serve customers and their mother, Patricia, helps in the kitchen.

“Since we’ve opened, we’ve done tremendously well,” said Almaraz. “I expected to be slow and build up clientele, but it was quite the opposite. We have not had a slow day. The highest day we used to have in Cathedral City is now our slowest day here so far. We are blessed with the La Quinta community and have been accepted with open arms.”

Another restaurant change, La Quinta Brewery, relocated this past year and took over the former Landmark Lounge spot in Old Town, providing them with a much larger kitchen facility. In big-box news, Panera Bread has pulled permits to demolish their current facility. 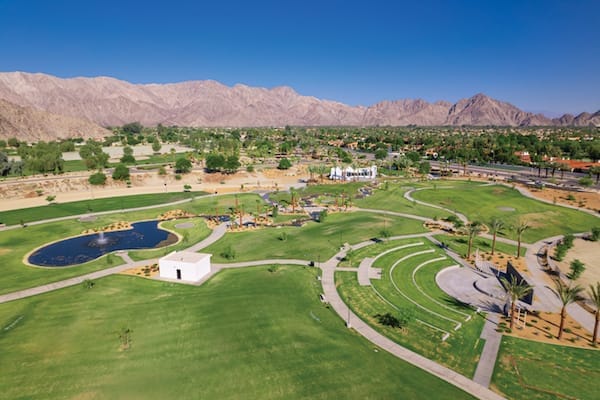 An aerial view of the new event park at SilverRock Resort.
But don’t worry, they won’t do that until after they have renovated a new location in the former Taco de Ojo Cantina building to accomplish having a convenient drive-through. You might also have noticed that the Starbucks on Washington near Calle Tampico moved into a new building a few hundred feet away to offer a drive-through.

Inquiries are trickling in regarding the desirable location of the former Soup Plantation building, but no offers have been submitted yet. While commercial rent continues to be high in La Quinta, the available inventory is relatively low at 9 percent, with the majority being office space.

The eagerly awaited new anchor of La Quinta Village Shopping Center, Grocery Outlet, has been delayed to an early November 2021 opening. The problem, is, unfortunately, a common one these days involving cargo shipping delays. Gilbert Villalpando, director, emphatically said that it has not been delayed because of the city and jokingly responded that he and Carlos Flores, senior planner, offered to go out in rowboats to help expedite the opening.

La Quinta also will be getting another new grocery store, coming to the old Stein Mart building, which will bring the number of grocery stores to 12. Paperwork has been filed for work permits, but the grocer has yet to be announced.

There also were delays at SilverRock due to construction material shortages, among other developer issues. To keep residents in the loop with continual updates on this important project, the city has been posting the Robert Green Company’s PowerPoints on the city website for all to view. 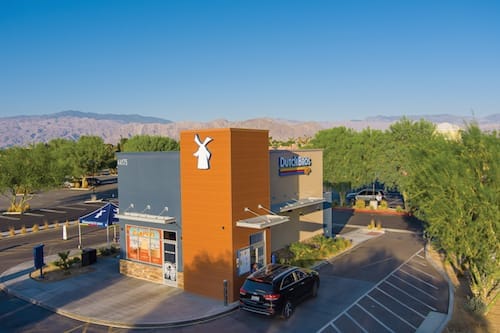 Dutch Bros Coffee La Quinta location is ranked No. 3 within the chain.

On the retail front, Garage Living, a specialty store focusing on tricking out your garage, has been helping customers create showrooms for their automobiles and custom cabinetry for organization and storage since it opened this past January.

With a significant pet population and three public dog parks, pets are an integral part of life in La Quinta. This past November, pet owners welcomed the opening of the La Quinta Pet Hospital, a small animal veterinary clinic at the corner of Washington and Simon Drive to care for their furry family members.

To fully appreciate progress includes honoring the city’s historical milestones. The La Quinta Museum does a great job of visually documenting the city’s history and presenting themed cultural exhibits. The city will be investing in expanding the museum this coming year. At Civic Center Park, two city-sponsored La Quinta Art Celebration events are slated this season — November 11–14 and March 3–6. 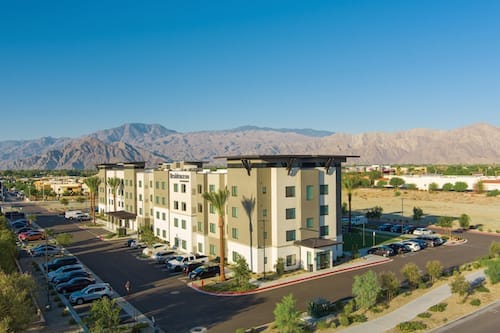 The 108-room Residence Inn has been experiencing steady occupancy since opening.

What’s lacking in La Quinta? It’s what’s lacking almost everywhere in the valley and many areas across the nation – affordable housing. “We have just over 1,300 affordable housing units currently,” said Villalpando, noting that the most recent addition of 140 housing units at a Washington Street community designated for seniors and adults with disabilities has a waiting list. “The Regional Housing Assessment Needs number that the state wants us to meet is an additional 1,530 units by 2029,” he explained. “We are working toward this goal of subsidizing more affordable housing.”

Another item on the city’s wish list is to offer a genuine resort-style attraction. Palm Springs has its Aerial Tramway; Palm Desert has The Living Desert … stay tuned for some possible big news next year about a La Quinta attraction. Also, put May 1, 2022, on your calendar to enjoy the city’s big 40th birthday bash.

• READ NEXT: Indio Reimagined Creates Excitement Among Residents and Tourists.