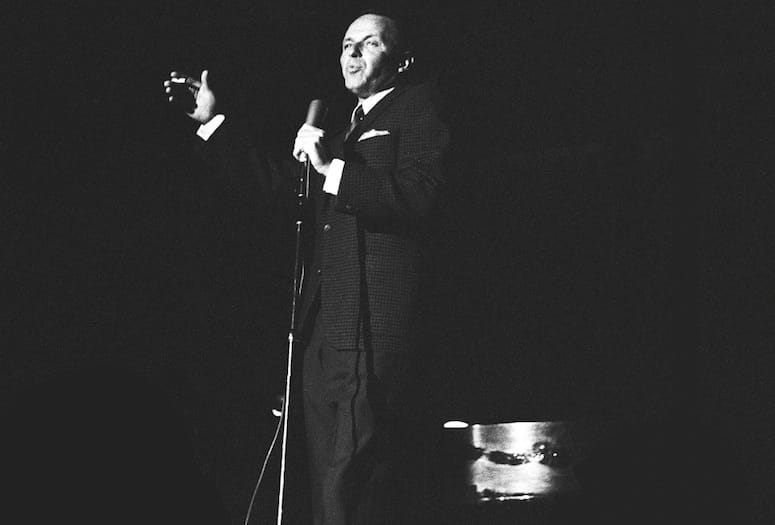 If Frank Sinatra’s first words of “I’ve Got the World on a String” were to break open from the heavens and drift over the Coachella Valley on a Monday morning, it’s almost certain everyone’s mood would brighten in unison, and well before the second verse.

The light and lively ditty he recorded at Capitol Records in 1953 is one of hundreds of tunes that make us feel so young, or, at least a little younger, just for hearing him sing it. In Greater Palm Springs, we like to believe we own the talent and achievement Sinatra brought with him when he chose to make his home here in 1947. (New Yorkers may feel the same, but they haven’t renamed Fifth Avenue.) His magical touch on the desert — playing the clubs, dining on the town, hanging out at Melvyn’s, and building that home with the piano-shaped pool — well, they can’t take that away from us. And we’d never let ’em.

With swagger and moxie, vulnerability and tenderness, who else could have coaxed life’s joys, moments, and memories into sounding so hopelessly romantic, martini smooth, and even cooler than the cool of the evening? Only Sinatra stops us in our tracks over toy balloons, sitting on rainbows, painted kites, kittens, clouds, rain, sunshine, summer wind, church bells, little town blues, a yellow moon, baubles, bangles, and bright shiny beads. Frank Sinatra Jr.: “He was master of reaching out with his feelings.”

“It’s a wonderful gift: the combination of his ability to tell a story and his technical ability as a singer to do it the right way so it sounds effortless,” says Mitch Gershenfeld, president and CEO of McCallum Theatre.

Like all Sinatra fans, Gershenfeld marvels at the energy and graceful ease that led Ol’ Blue Eyes to touch the listener in fluid waves.

Of all the years to enjoy the music Sinatra made famous, this is a very good year to do it his way and take in those standards that are anything but. While theaters around the country celebrate the Sinatra centennial, the swingin’ series at McCallum Theatre ensures that in the heart of Palm Desert the best is yet to come. Global sensations in their own right, Steve Lawrence, Jack Jones, Michael Feinstein, and Frank Sinatra Jr. have drawn standing ovations during past seasons. In singing Sinatra, they honor The Chairman of the Board through new shows orchestrated to mark what would have been his 100th year. “These songs make up the Great American Songbook; everyone sang them,” Gershenfeld says. “What was it about Sinatra that made them so iconic? That’s what we’re trying to explore.”

The legendary singer’s son Frank Jr., who grew up in the desert, starts the series on Feb. 5 and 6, 2016. “He was master of reaching out with his feelings,” he says. “He was empathetic. He conveyed the emotional meaning of the lyrics.” What Sinatra lacked in formal musical training he made up for with his sensitivities. “When I hear his ballads on the radio, I say to whoever is near: ‘Listen closely. You’re never going to hear singing like that again.’ I was fortunate to be around for the making of that music.”

A trained musician, Sinatra Jr. served as his father’s musical director and conductor beginning in 1998. “Believe me, it was a learning experience,” he confides.

Now in his 55th year of performing, Sinatra Jr. labored for two years piecing together an unexpectedly intimate show that reveals a “human side” only a son could render. “People know the music and the legends. But when the legends become bigger than the person, you lose the person. What about his fears, hopes, dreams? The new show deals with him, his life, the man.” To do so, Sinatra Jr. unveils a multimedia chronology that “becomes a saga as well as a performance,” he says. Firsthand stories, photos, and videos enhance a powerfully stirring evening of song. Jack Jones: “My show is a celebration of his life and his music.”

Frank Sinatra was known as a man’s man, and he had plenty of pals to back up the legend. One was Steve Lawrence, who performs Feb. 14. He and wife Eydie Gorme opened for Sinatra on the Diamond Jubilee Tour surrounding Sinatra’s 75th birthday. “A number of players in Steve’s show have played for Sinatra,” Gershenfeld says. “His tribute album with arrangements Sinatra gave him is just brilliant.”

Lawrence says, “I hope [the audience] will leave with a sense of knowing the great regard and respect that Eydie and I both had for Frank and his great contribution to the world of music.”

Locally based Jack Jones tips his hat on March 4. Jones was in high school when he saw Sinatra perform at a local junior high. “After that,” he says, “I was no longer on the fence about if I wanted to be a singer” like his father, Allan Jones, was. “That did it for me.”

His participation in the Sinatra Centennial series inspired his new album Seriously Frank. “We introduced it at the Catalina Jazz Club in Los Angeles,” Jones says. “We have 22 pieces playing — it’s quite an undertaking — and we blew the walls off.” French horns and a tuba add oomph to the big band sound. “The wonderful song that closes the evening is called ‘The Singer,’” Jones says. “It’s a great epilogue that begins, ‘How can we thank him?’ My show is a celebration of his life and his music.”

“I don’t think there’s anyone alive who knows more about this music than Michael,” Gershenfeld says. Feinstein’s insights blend with funny and poignant stories that tie the songs together and put the musical numbers in a more resonant context.

“When I sing a song connected with Sinatra, I try to emulate his sensibility and approach to a piece, then interpret it my own way,” Feinstein says. “The emphasis on telling a story is supremely important, as is the rhythmic equation. He knew how to phrase. I won’t sing anything that I don’t feel I can put my own stamp on.”

Feinstein fondly recalls their meeting. “I was not well known, yet he spent real time talking about music, songs, and musicians with me,” he says. “He helped me to discover different and fresh ways to interpret a song. He also never stopped looking for what was new in music and seeing how he could incorporate it into his style.”

Gershenfeld says Sinatra’s impact on the area moved the McCallum to honor him with the series. “It felt appropriate to invite four incredible artists to pay tribute by singing his songs in their own way,” he says. “I can’t think of any singers who are better suited to commemorate the centennial or whom I would rather hear.”