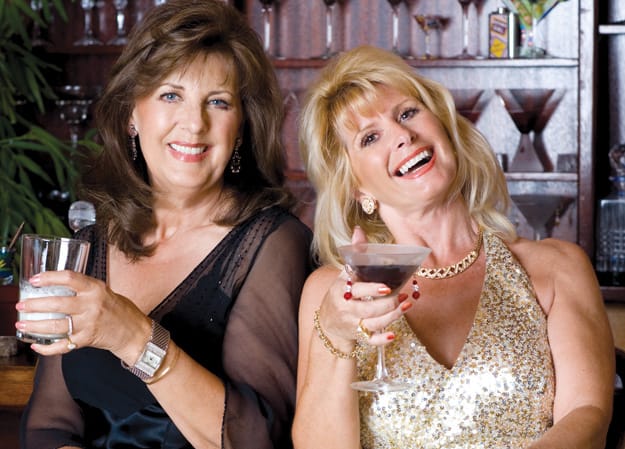 The two women on stage at the Indian Wells Theater execute a game of musical pingpong. Sharing the spotlight, Dela Zimmer effortlessly soars through arias, followed by her sister Elizabeth Dreyfuss, who belts out show tunes. Eventually they settle into a formalized sibling rivalry, assisted by the lyrics of Irving Berlin’s “Anything You Can Do” from Annie Get Your Gun. But their musical sparring is no more serious than a contretemps between Lucy Ricardo and Ethel Mertz.

Growing up in England, Delatour and Elizabeth never fought. “Dela” was an operatic child prodigy with a four-octave range. Her younger sister, Elizabeth, starred in musical theater. Their copasetic co-existence unraveled only when Hollywood intervened.

After immigrating to the United States in 1978, the sisters found themselves unemployed and living with their mother, their husbands, and three children in a rented Studio City home. Dela smiles as Elizabeth reflects on their memorable “dust-up.”

“I’m a bit of clean freak,” she explains, “and I was driving her up the wall. One morning, I came into Dela’s room with the vacuum and she was on the phone with her husband. She said, ‘My God, couldn’t you knock?’ ‘I have to vacuum,’ I said, without stopping. We almost killed each other, slugging it out with pillows. It was our first and last fight.”

The sisters come from a theatrical family. Their father, Eric, was a studio makeup artist who perfected the use of latex in facial prosthetics. He met Eleanor, a hairstylist, when they worked at Shepperton and Ealing Studios outside London and they wed. Eric’s brother, Stanley Hall, created wigs for theater and film productions, including Elizabeth Taylor’s iconic do in Cleopatra; stars such as Vivien Leigh and Elizabeth Taylor became his friends. But it was young Dela who surprised everyone.

“At the age of 3,” she explains, “I had an epiphany. My grandparents took me to the movies and we sat in the balcony. Before the movie, a woman came out and stood in front of the red curtain. She sang an aria accompanied by a pianist. I was so moved I cried; and I remember thinking, ‘I can do that.’ I went home and all of a sudden, I was producing this sound. As a child, I became well known, making radio and television appearances and winning every singing award there was.”

Young Dela was routinely asked to perform at her parents’ parties — a burden she resented. But Elizabeth saw this as an opportunity to create an act of her own.

“They would drag poor Dela out of bed and ask her to sing, and she hated it. But I was dying to perform. I practiced in my bedroom and worked up this bit where I played the album from The Sound of Music and perfectly lip-synched all the nuns’ songs — sped up to 78 rpm. That became my party piece, and it was a great hit.”

Elizabeth cast herself as the funny prankster; while the more serious Dela went on to sing on the BBC, at Royal Albert Hall, and at the Palladium. At the age of 20, she turned down an offer to join the Sadler’s Wells Opera Company in favor of the leading role in a touring production of the musical Lilac Time. Later, at the age of 15, Elizabeth was discovered by a talent scout, who cast her as Little Red Riding Hood in a pantomime (London’s theatrical tradition in which leading actors cross-dress in spoofs of children’s stories, staged between Christmas and New Year’s). Elizabeth immediately accepted the part, leaving her performing arts school and taking a room in a London bed-and-breakfast inn to begin her career as a musical comedy actress.

“When I was 17 or 18, I had a confrontation with my father,” Dela says. “He was very ambitious for me and very controlling. He wanted me to put my entire life on hold for the sake of my career. I rebelled against his efforts to control me by turning down offers. I was asked to audition for Covent Garden, and I didn’t take it. I decided to marry and have children; I let my career peter out when I should have been moving it forward. When you’re young, you make some really dumb decisions.”

“Poor Dela bore the brunt of it,” Elizabeth clarifies. “Our parents were a bit more relaxed with me. But mother was a typical stage mother, and dad was controlling. Our parents would argue, and Dela and I rebelled. We wanted to have a family life that would improve on the one we had as children.”

Elizabeth recalls one incident in 1968 when she was 16 and her mother took her to Apple Studios, where Peter Asher (of Peter and Gordon) was looking for a new pop singer. He had seen her in a play and thought she might be the next Lulu.

“I’m sitting in the lobby at Apple with my mother, and John Lennon and George Harrison walk in. My mother, in a loud voice, says, ‘Oh, look. There’s Paul McCartney!’ I roll my eyes and John laughs. He walks right over to us, sits down, and says, ‘Hi, I’m Paul McCartney.’ My mother shakes his hand and says she’s so glad to meet him. He asks what we’re doing there, and we tell him. ‘Is that what you want to do?’ he asks me, ‘be a pop singer?’

“‘No. I want to do musicals,’ I said. That’s all I wanted to do.“‘Then you should do what you want,’ he tells me. George Harrison never said a word. John gets up and they both walk away. Then in the audition with Peter Asher, I told him I really wasn’t interested in being a pop star. And that was that.”

In 1978, a visiting cousin convinced Elizabeth and Dela to move to California.

“Our cousin Valerie,” Dela recalls, “was visiting from the United States. She was married to Frank Peppiat, who created the television series Hee-Haw with John Aylesworth. Our family all got together and Valerie asks us, ‘Why are you people here? This country is going to the dogs.’ Margaret Thatcher was in power at the time, and things were quite a mess in England. So Valerie suggests we come to the states. Within three months, we sold everything and moved.”

Elizabeth laughs at the memory of the four months they lived with their American cousins. “They were so sweet to us. Both of our families stayed with Valerie and Frank in their Beverly Hills mansion. Ten of us arrived — wives, husbands, children, two staff people, and, of course, mother, who insisted on going as well. They had a huge house of 10,000 square feet, and it was great fun. They threw wonderful parties, and we got to meet everyone in their crowd, including Jimmy Stewart, who was a neighbor.”

But the full house soon led to a move to Studio City, and the sisters began the 30-year American odyssey that ultimately led them to the Coachella Valley. They divorced, remarried, and began new careers, with their mother standing nearby in the wings, as usual.

“My first husband quickly went back to England,” Elizabeth says, “and my mother stayed home to take care of my son while I worked. I auditioned for a few things and ended up working in publishing as a receptionist for puppeteer Shari Lewis’ husband. I was horrible. I’d never had a 9-to-5 job in my life. I eventually ended up with my own public relations firm and became an executive assistant to director Ridley Scott and later producer Don Bellisario.”

Dela worked in Los Angeles real estate and later created her own film location business, Ascot Locations, which she sold to Elizabeth when she moved to New Mexico with her husband, Mark Zimmer. Elizabeth met and married writer/actor Lorin Dreyfuss (brother of actor Richard Dreyfuss). A few years ago, both families relocated to the Coachella Valley. Dela is now a real estate agent with Coldwell Banker in Palm Desert, and Elizabeth has gladly put the Hollywood rat race behind her in favor of a quiet home life with Lorin.

While living in New Mexico, Dela sang with a small local opera company. But once the sisters were again living in the same locale, Elizabeth put the free time now at her disposal to good use. She hatched a scheme that would put both of them in front of an audience again.

“She’s very aggressive when she wants something,” Dela explains.

“All right. You said it. You’re a pushy broad,” Dela agrees. “Elizabeth decided she wanted to perform again, and she wrote this show for the two of us. She did everything. She wrote it, produced it, directed it, and did all the publicity. All I had to do was show up and sing.”

The cabaret show Relatively Singing debuted on Feb. 18, with the sisters in the limelight and mother Eleanor in the audience. The show sold out its first performance at the Indian Wells Theater; another is planned for November.

“We were simply overwhelmed with the reception we received,” Elizabeth says with characteristic enthusiasm. “Nothing is more rewarding to a performer than looking out over a room full of smiling faces.”