Hallmark Channel movies have become bona-fide ratings bonanzas. Many of them are either centered on Christmastime family reunions or summer weddings, such as Sister of the Bride. The film, which follows two sisters and their complicated plans to wed at their parent’s home in Palm Springs, was shot over 14 days during Spring 2019 and premiered last June and has become a viewer favorite.

Director Sam Irvin is a Hallmark movie directing veteran with a long list of film credits. He’s also an accomplished author (his biography of show business legend Kay Thompson earned raves in 2010), and recently published the cheeky Sam’s Toilet Paper Caper!, which he describes as a parody of the Golden Books favorites we all read as children. This spoof is set during the current Covid-19 quarantine, chronicles his fear of running out of bathroom tissue, and all the profits from sales will benefit the World Healthcare Organization.

Irvin chatted with Palm Springs Life about filming in the Coachella Valley and the inspiration for his clever book.

What was behind the decision to set Sister of the Bride in Palm Springs?

The thing with Hallmark movies is it’s a lot about the setting and the look. If I do a Christmas movie for them, it's loaded with snow and Christmas lights everywhere. When you make a bride movie, you want to have a location that is going to be luxurious and beautiful. Because the production company is based in Los Angeles and it's very expensive to shoot in L.A., our producers recommended we shoot in Palm Springs. We thought that would be so beautiful and it wouldn't be terribly expensive. We wouldn't have to fly people there, because most people can just drive out from L.A 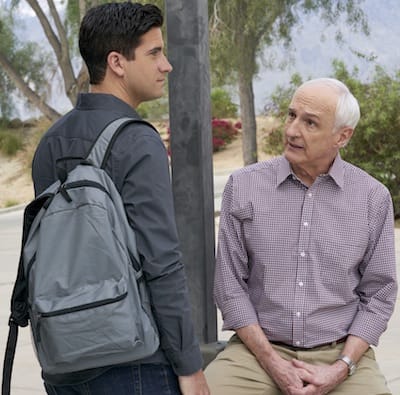 Michael Gross, best known as Steven Keaton in the 1980s TV show, Family Ties, in a scene with Ryan Rottman from the Hallmark film in Palm Springs.

Where did you film out here?

We filmed in Cathedral City and in Palm Springs itself. We had scenes of the characters driving into town. I wanted to make sure we saw the windmills outside the car, because that's what happens when you're approaching Palm Springs. You know you're getting close.

Were there any locations here that didn’t work out?

We originally wanted to shoot at Twin Palms, the Frank Sinatra house, and for a while it looked like we were going to be able to. We ended up not shooting there, because it’s actually quite small when you get in there. It was just so cramped that we just decided we needed a bigger house. We settled on a place right across the street from where the Coachella festival is held.

Palm Springs is a big gay mecca, but there aren’t any LGBTQ characters in the film.

Well, not overtly. It's a tricky thing, because there were not any overtly gay characters. I think that you could possibly extrapolate that maybe the guy at the florist shop might be, or the photographer that they hire might be, you know, that sort of thing. I think it's left up to interpretation of the viewer.

You were just a director for hire on this film, but last year there was a kerfuffle when Hallmark Channel pulled its LGBTQ-friendly ads due to complaints from conservative groups and then reinstated them. Was there ever any kind of discussion about putting an overt LGBTQ character in the film? 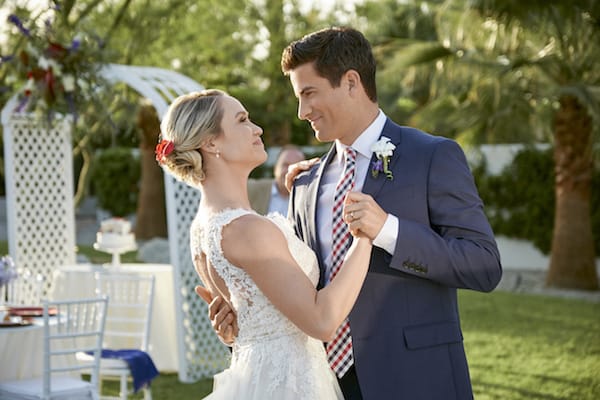 Becca Tobin as Stephanie and Ryan Rottman as Ben announce their engagement after a six-month romance in Sister of the Bride.

Not to my knowledge. It would have been at the script stage and that wouldn't involve me. I will say when that controversy happened, I was extraordinarily disappointed in their initial stance and I was very torn about it. I wondered if I was going to be able to direct movies for a company that does something like that. It was a really, really hard few days until they reversed their decision, which I was greatly relieved and very happy about. There are certain older-fashioned companies and as with anything, as long as there's progress, I want to applaud it and be part of that. I feel that they're on the right track, but they still have a long way to go. I think it would be really lovely to have some films on that channel with gay lead characters and don't know when that's going to happen, probably not tomorrow, but things are heading into the right direction.

Besides you, were there other LGBTQ crew members?

There were several gay people in the crew, even up into the producers. The writer of the film, Anna White, is a lesbian, so there was lots of representation. It was a really fun project and we'd all pal around on our days off and then go to the gay bars, even all the straight people would hang out with us because we were the cool kids. It was so much fun shooting there and I hope we get to do it again.

What are some of your favorite places to visit in Palm Springs?

I have to go to that whole strip of gay bars on Arenas. I always head over there, even though I don't drink alcohol anymore, I still have great fun with friends.

You've also just recently published Sam's Toilet Paper Caper!, which is a parody of childrens’ books, which is set during the current pandemic. What inspired you to write it?

On April Fool's Day, I had just gone through the terror of almost running out of toilet paper. All the store shelves were empty. I decided to write this up as a humorous satirical essay about my trials and tribulations of trying to get toilet paper. 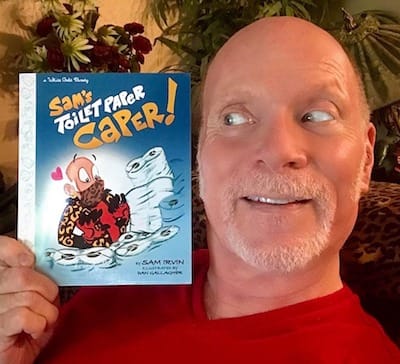 Every bathroom in the world should be stocked with this book. It's perfect reading material when you're sitting on the throne. I’m donating every penny of the profits to the World Health Organization's COVID-19 Solidarity Response Fund.

Sister of the Bride will air on the Hallmark Channel network on July 4. Sam’s Toilet Paper Caper! is available for purchase on Amazon.