Johnny Nicoloro Displays Flower Art You Can Sit On 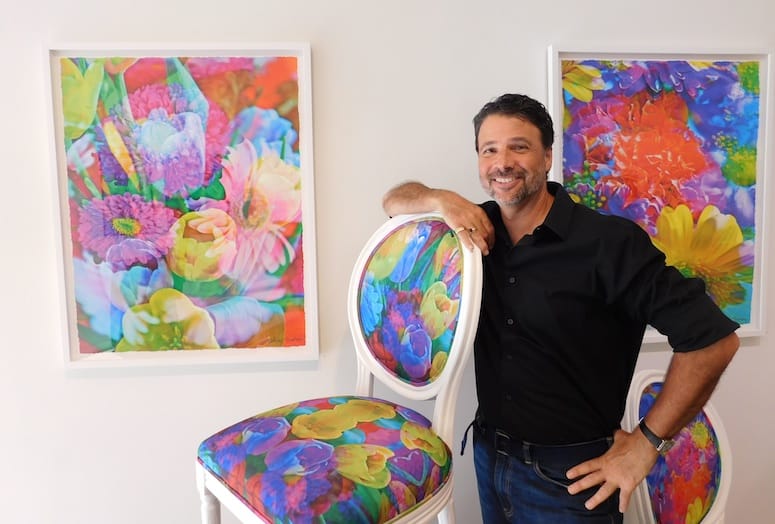 Johnny Nicoloro transfers the images of his framed flower shots and has them transferred onto a fabric for chairs.
PHOTO AND VIDEO BY MARCIA GAWECKI

Although Los Angeles based camera artist Johnny Nicoloro has been photographing flowers for years, he just recently took his images “out of the box” and printed them on fabric for chairs.

His double images of flowers on paper are coupled with the same image on a round-back chair on display now until the end of June at the Ted Casablanca Gallery in Palm Springs.

“Bruce (Bibby, gallery owner) wanted me to print the flowers on a table, but I decided on chairs,” explains Nicoloro during his show at the gallery.

VIDEO: Johnny Nicoloro explains the inspiration for his photos and chair art.

Nicoloro’s work came to Bibby from a suggestion by a mutual friend who plays poker with him. “I saw his work and loved it immediately,” says Bibby, “even though it is so bright and lush and most of my style is minimalist.”

Nicoloro inherited four round-back chairs from a neighbor who passed away recently. They were all white, and stood in stark contrast to his multicolored apartment in Hollywood. “So I got online and found a company that could print my images on fabric,” Nicoloro says.

He chose fabric strong enough to handle people sitting on the chairs. Then he marked it with tape and took the chair to an upholsterer suggested by Bibby. Nicoloro was happy with the fabric results, but the chairs were another story.

“The round-back chairs that I inherited from my friend were very expensive, about  $1000 each, and I had a heckuva time finding similar ones to match,” he adds. 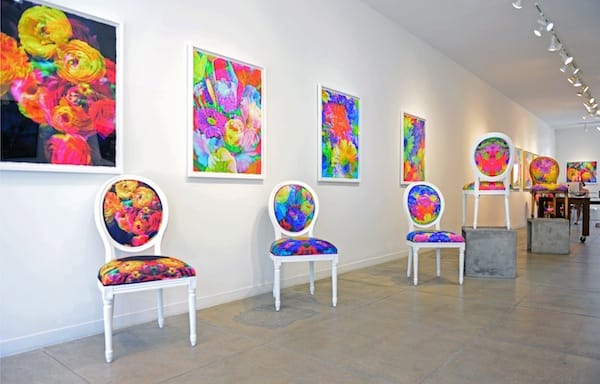 He finally found the Old Hickory Tannery, a mom-and-pop shop that had what he wanted. The four original chairs are gold painted and priced higher, while the newer ones are white.

“They are the same images as the prints on the wall, but they show a mirror (image) and a repeat, he says.

Nicoloro always uses double exposure images or two images in the same frame. That’s a much easier task to accomplish now with a digital camera because there’s a double image setting, but Nicoloro used to have to estimate and roll back the film with his manual camera to obtain the same effect.

He likes working with flowers that he finds everywhere, including flowers he’s received as gifts from friends, those he sees at Trader Joe’s or Home Depot, or the multitude found in his abundant British-style garden at home.

“I wish I had a great backstory about flowers!” Nicoloro exclaims. “I just remember how wonderful my mother’s hydrangea bush was growing up in the LA area. Unfortunately hydrangeas are not good to photograph because their petals don’t reach out and touch other petals that makes my double exposures work.”

So far Ted Casablanca Gallery has sold half of his limited edition prints, and there is much interest in the chairs.

Nicoloro is unsure whether to apply flower images to other pieces of furniture. At his home in Hollywood there are multiple flower pillows showcasing his images, but they are only for his personal use.

Nicoloro earned a degree in theater from UCLA, and took a gap year before graduation to live in England. His first show in an LA gallery was a success. “Chuck  Pendergrass owned a building on Melrose and he loaned the front space to artists once a month,” he explains. “I was a neighbor and he gave me my first real show. I was all over the place with flowers, Virgin Mary’s, portraits and landscapes, but I sold a lot.” 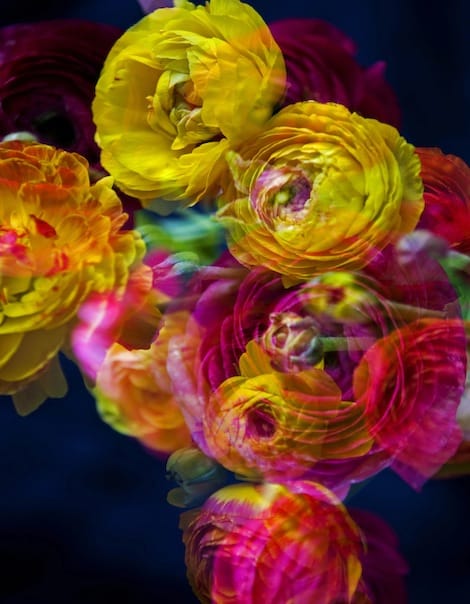