Sky’s the Limit Observatory Brings Galaxies Closer to the Desert 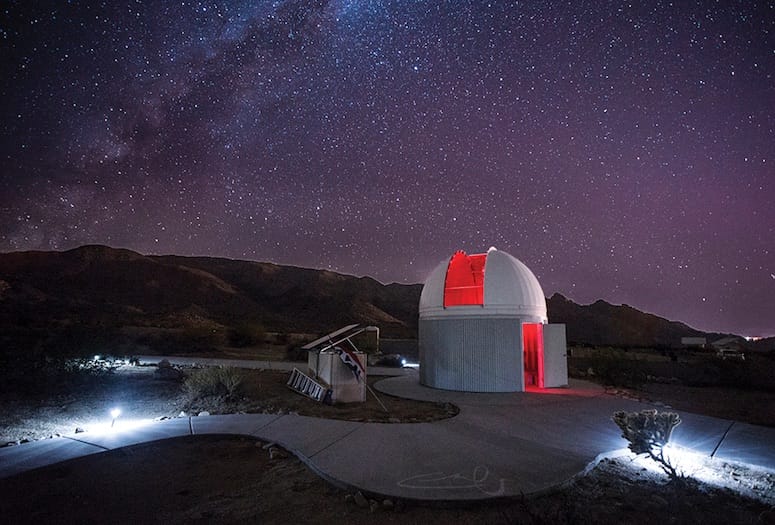 Carl Sagan said it: “We’re made of star stuff.”

He was not being entirely poetic; astrophysics says we are composed of elements forged in the cores of ancient stars that exploded and seeded the universe. Et voilà! Enter us, our planet — and palm trees, hot tubs, and mixologist-made mai tais. The sagacious Sagan (1934–1996) went even further, theorizing that “we are the way for the cosmos to see itself.”

To this end, if you find yourself with a hankering to gaze upon the existential stew from which we sprung, do so with the local wizards of stargazing. These experts, known by their Greek name, “astronomers,” act as our middlemen to the galaxies.

Tucked between the hills at the entrance to Joshua Tree National Park in Twentynine Palms, the center hosts frequent gatherings for those eager to learn about the stars.

Two events this month highlight Jupiter, king of the planets. Observe this heavenly heavyweight at opposition May 5. (In layman’s terms, this means it will be positioned opposite the sun and at its closest approach to Earth, resulting in prime viewing.) A May 12 gathering zeros in on both the gas giant and its 69 moons.

“We have recently been certified as an official Dark Sky Facility,” says volunteer astronomer Ray Yeager. “This means the artificial light surrounding the observatory is at a minimum.” And minimum artificial light leads to maximum optical clarity.

The $3.6 million observatory at the Rancho Mirage Public Library — constructed by Sea West Enterprises, the masterminds behind observational outposts from San Bernardino to Atlanta — opened to much fanfare in March.

“We like to see the observatory as a way of furthering our mission of lifelong learning,” says David Bryant, director of the Rancho Mirage Public Library and Observatory.

Compared to the 95-inch Hubble Space Telescope mirror (which revolutionized our view of the cosmos and reality), the Rancho Mirage Observatory’s telescopic mirror has a diameter of 28 inches — still pretty big for a small-town telescope. Have your own instruments with which to watch the stars? Available for public use is an expansive exterior deck where one and all can gather and gaze. 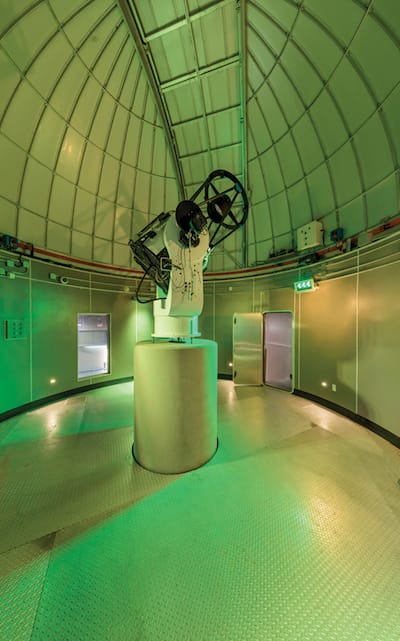 Scoping things out at the Rancho Mirage Observatory.

If you like your astronomy served up with a mythological bent, Sky Watcher Stargazing Tours in Palm Desert is your best bet for an illuminated outing. Here, guides lead visitors on a fascinating journey that combines science and folklore to demystify the denizens of the celestial bestiary. Private and group tours include space trivia, recitations of Native American mythology, and an inspection of the night sky with binoculars, constellation charts, and an 8-inch Schmidt-Cassegrain computerized telescope that homes in on any space spectacle of your choosing. Should the evening bring clouds, visitors will not be disappointed by an indoor presentation highlighting the greatest hits of the skies.

Eisenhower and
the ET’s

On Feb. 20, 1954, while on vacation in Palm Springs, President Dwight D. Eisenhower made an unscheduled visit to an unknown location. The story from the Eisenhower camp is that the president went to the dentist after chipping a tooth on a chicken wing at Smoke Tree Ranch.

Wrong, says Michael Salla, director of the Exopolitics Institute, a nonprofit educational institution that lays out the political landscape of Earth and the rest of the universe. 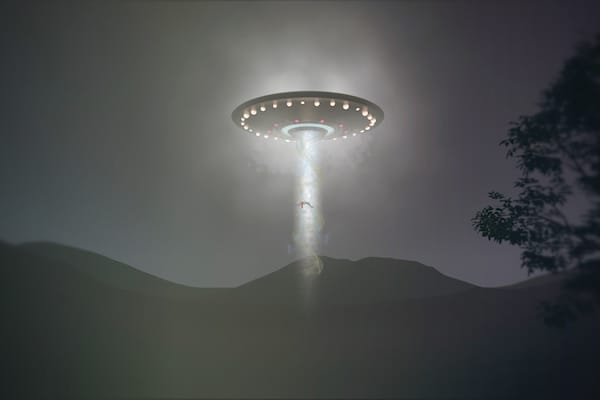 He and others claim Eisenhower visited aliens — or, to be more precise, visited the Edwards Air Force Base, where said aliens were rumored to be lounging after a long intergalactic flight.

Whomever you believe, one thing is certain that raises eyebrows: On the evening in question, the Associated Press reported that President Eisenhower had died of a heart attack in Palm Springs, only to retract the report two minutes later. This stuff you can’t make up.