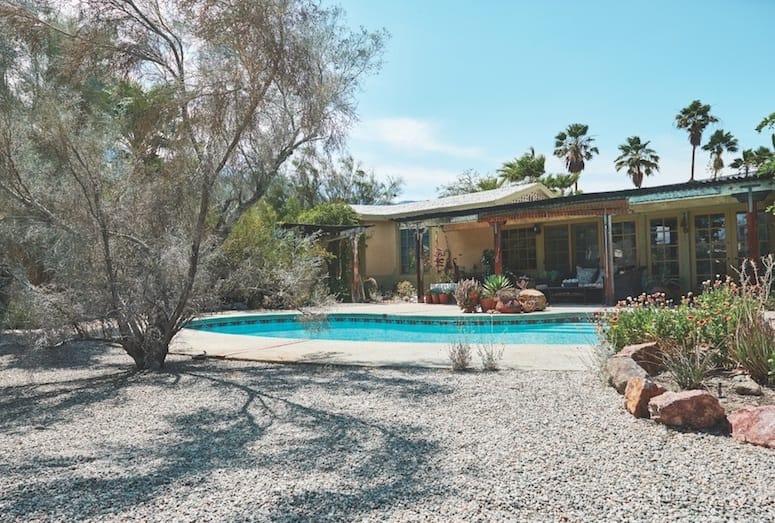 Western ranch gate reads “Wehrli” and stands at the end of a long drive covered with pea gravel — the unlikely entrance to Mary Brent and Martin Wehrli’s Palm Springs garden.

Underfoot, pebbles crunch like the sound of spurs, and the imagination conjures a tumbleweed blowing past, a cowboy whistling a sweet, mellow tune, and his cattle dog joining in. Despite the hot wind and dry air, an oasis of color, texture, and willful life blooms beyond that gate, thriving as a lush, albeit slightly Wild West, garden in the desert. Designed to conserve water, this rustic grove of plants brings joy, provides shade, and envelops the couple’s home with a growing, changing environment.

The Wehrlis bought their property in 1999. At almost two-thirds of an acre, it was sparse at best. The Western-style gate was paired with a white cottage built in the mid-1930s, when Palm Springs might have felt like a sprawling ranch itself. Yet, once filled with furnishings from Martin’s former residence in Cody, Wyoming, it instantly felt like home. The Wehrlis envisioned creating a garden beyond the ordinary.

Though they lived in Los Angeles full-time, the Wehrlis devoted every weekend to cultivating the land. “Other than a couple palms and creosote, nothing you see was here. Everything was dead and dying,” Mary Brent says. “It was parched, decrepit, and unloved. No one had lived here full-time. They just wanted to come out and use the pool.”

The Wehrlis envisioned creating a garden beyond the ordinary. Martin tackled the hardscape and irrigation. He cleared paths, built fences, and added ramadas  to the front of the house. The couple repainted in desert hues. Mary Brent became lead gardener, following Martin’s concept of defined “islands” of plants. One island leads to the next along meandering paths.

“We didn’t sit down for five years,” Mary Brent laughs. Though they were nearing retirement, the energy they poured into the garden rejuvenated them. They removed five tons of neglected, tangled mess, she recalls. “Then we started to put in some plants, and it just came to life.” The Western-style gate that marks the entrance to Mary Brent and Martin Wehrli’s painstakingly constructed paradise.

“This was this high.” “These were just babies.” “This mesquite tree was a twig 10 years ago. Look how healthy it is now!” These are among Mary Brent’s favorite exclamations anytime someone asks for a tour. She can’t help but marvel at the vigor of desert plants, which can survive in even the worst of weather.

“Mother Nature is brilliant,” she declares, adding that their garden’s plants are adapted to a desert climate and most flourish with very little water. Her techniques include sticking with plants that do well with drip irrigation and hand-watering. She also employs plenty of mulching with a mix of decomposed granite, various-sized rock, and organic material. The Wehrlis love this view out to the garden, where birds provide hours of entertainment.

“I added a ton of new rock and organic mulch this year to inhibit weeds and conserve water,” she says. “I can already see the difference in the beds.”

While people are tearing out lawns at great expense or simply opting for “brown is the new green,” avid gardeners have found an indispensable friend in desert-appropriate plants.

“Why not? They’re fragrant and beautiful!” Mary Brent effuses. “They have amazing colors, marvelous smells, different textures, and all shades of green. And you can have a lush desert garden. It doesn’t have to be barren.” Mary Brent attests that a garden filled with desert plants is abundant in its returns.

Nor even Wild West. Each April, the 10-year-old Desert Horticultural Society — of which she is a founding member and current president — presents a garden tour to show the breadth of styles available depending on the selected plantings, how they are arranged, and the surrounding hardscape.

Some might say we take on gardens both selfishly and selflessly, like pets and children. Mary Brent surveys the weather and worries whenever she leaves town. On average, she works two hours a day inside its mysterious, relaxing labyrinth. “Martin has built benches for me everywhere,” she admits with a smile. “But I am usually weeding, trimming, moving plants. There is always something to do.”

She attests that a garden filled with desert plants is abundant in its returns. “It can literally plant itself. It sends out seeds and runners so you get new plants. They repropagate and keep themselves alive and dance around the garden to where they want to be,” she says. “I don’t think a traditional garden is as generous in that way.” Around her, clusters of cacti that look like dollhouse-sized balls of string peek from pots. Plants grow gnarly and unruly from the earth; others are delicate and in bloom. Trailing, rugged, spiky, fleshy, slim, and snaky — she loves them all. “The plants have a lot of personality,” she explains. “If you love desert plants, it’s easy to just let them do what they want to do,” without aiming for a picture-perfect result.

“My dogbane plant died on one side of a path and then popped up on the other several years later. Maybe that’s one of the fun things about being a gardener. It’s far from static.”

In the back of the property, a two-sided studio Martin built offers one space for Mary Brent’s yoga, the other for his painting. Their garden has also hosted a friend’s wedding, a Palm Springs Art Museum Western Art Council sit-down dinner for 100, and a Living Desert University class each March for the last four years. A path leads from the home to the yoga and art studio. On each side, creosote bushes, agave, cacti, and an old palo verde tree flourish with minimal water.

At one point in the tour of her garden, she pauses to wax poetic about a disorderly creosote bush. “Its yellow spring flowers turn into adorable tiny white puffballs. It’s the plant we all smell after a good rain,” she explains. The pods of the honey mesquite? “Ground into meal, that’s what kept the Native Americans alive.”

A feast for the senses, this desert garden started just a decade and a half ago under Mary Brent’s motto: If you can wait, plant small. “Things will grow very robustly. It just takes time to develop a good root structure, which teaches you patience. My good friend said, ‘First it sleeps, then it creeps, then it leaps.’ ”

The maxim is well proved in Mary Brent’s layered canvas of plantings. “I can say 16 years later that it’s amazing,” she says. Now, when she considers buying a plant, she stops herself. “I say, ‘No. Let’s see what we can keep alive.’ I’m going to keep what I have going. We are the caretakers for now of this garden. God willing, the next people will love it as much as we do.” Define the style you want, then draw a plan for paths and open spaces. These can be gravel, brick, tile, decomposed granite, or organic mulch. New construction should have a grey water system and controlled irrigation. Enhance your garden with a variety of boulders. Though expensive, they offer safe haven for plant roots in the hot summers.

Choose desert trees for shade and beauty that will grow to your garden’s scale.

Do not overplant. Plant in October and choose varieties that require little water: bladderpods, chuparosa (a favorite of hummingbirds), smoketree, mesquite, encelia, bottlebrush, and creosote — one of the oldest plants on earth. Plants grow best when put in the right spot for their species: full sun, partial sun, or shade. During brutal summer months, use a sunshade if needed and move pots out of the sun. Use mulch year-round.