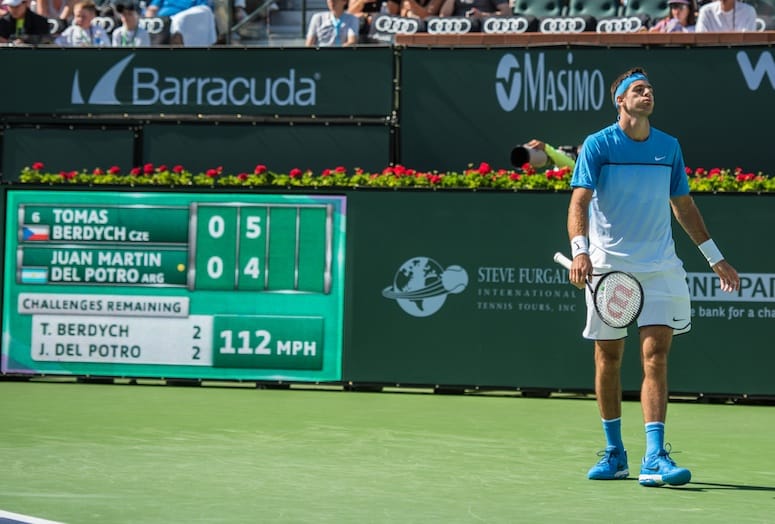 He had lost, which was understandable. And given the circumstances, acceptable.

Yet, this time Juan Martin del Potro was been beaten by the man across the net, Tomas Berdych, not his own body.

So difficult for an athlete, so agonizing when he or she is injured. The weeks of inactivity, the fall in the rankings, if not from grace.  An inability to play, to practice. Disappointment.Doubt.Questions.

This was the first significant test for del Potro, in the second round of the BNP Paribas Open, Saturday in the sunshine on Stadium Court One at the Indian Wells Tenns Garden. A comeback, after one wrist surgery, then after another, sitting idle most of last year, finally returning to competition in February in Florida and Thursday winning a first-round match here against the American qualifier, Tim Smyczek. “This will be my first match against a top-10,” said del Potro, an Argentinean who can be excused for mixing his tenses. “Was OK.”

“I played a great first set,” confirmed del Potro. “I had my opportunities to win that set, and I miss it.”

What he missed was tennis. Here was a hulking, handsome athlete with a wicked forehand who in 2009 at age 21 took the U.S. Open, beating Roger Federer in the final. He was a major champion. He was No. 5 in the world.

Then the pain. Now the return. And the struggle. Without a chance to earn rankings points he had tumbled for 419th. So, like a rookie, in early matches he is forced to play the top seeds, such as Berdych. Still, del Potro is not complaining.

“I said before I’m so happy to be playing tennis again,” insisted del Potro, “and I would like to play everywhere, every tournament. But I have to keep calm and still go day by day.”

del Potro wanted a sense of his how far he must progress. He learned, a very hard way.

“These guys are the best in the world,” said del Potro, who in the big picture, and at age 27, must be considered one of those guys. “Tomas and the top 10 players are the high level in the world. Maybe it’s too soon against them, but it’s the only way to get better.” Berdych, a former Wimbledon finalist, spoke to the crowd on the public address system after his win, as his traditional, and said, “It’s great for tennis to have Juan Martin back,” and you knew he spoke from the heart.

During the match, after an unforced error, a backhand into the net, a forehand long, del Potro grimaced or kicked the court. He could tell us he had to be patient, but that didn’t mean he had to show us.

“I’m trying to build another career,” said del Potro, “and I’m still fighting my wrist problems. I don’t mind if I beat (others) in the past. I just have to work hard to improve my game again.”