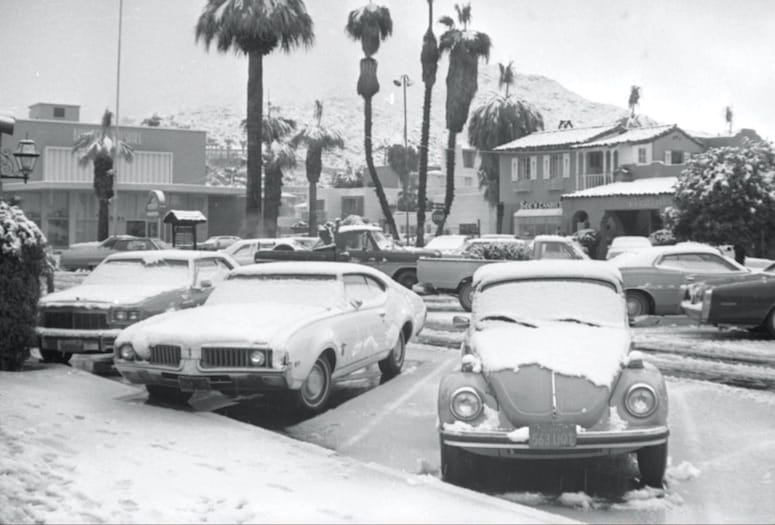 This archival photograph by George Aquino shows La Plaza at a standstill after snow and ice covered the sidewalks in 1979.
PHOTOGRAPH COURTESY PALM SPRINGS HISTORICAL SOCIETY

Yes, you read that correctly. We talked about it at the Palm Springs Life offices one day in January, when the temperature had dropped so low that I wondered aloud if it might snow again in Palm Springs.

Black-and-white photographs in the magazine’s archives and at the Palm Springs Historical Society show the downtown village like we have never seen it. The images of cars  covered in powder looked like scenes from the Northeast, save for the dead-giveaway modernist buildings and palm trees, the indigenous Washingtonia filifera whose mournful-looking fronds drooped with the weight of the snow. Some fallen fronds became makeshift sleds for wide-eyed children experiencing their first (and only) snow day.

The photographs also show the blanketed rocks and sand leading to the Lykken Trail and Tahquitz and Chino canyons, as well as a man shoveling the sludgy sidewalk outside the Plaza Theatre and a young mother building a snowman with her three children. There were snowball fights, sled races, and even attempts at cross-country skiing.

The next morning, the front page of The Desert Sun declared, “It’s for real! — Snow in the valley.”

Snow fell again in the desert in 1986, but in the 33 years between then and now the only ways to see the glorious white in the desert have been to look up at the San Jacinto Mountains or ride up the Palm Springs Aerial Tramway. You could also find it in Joshua Tree, whose elevation is more than 2,000 feet higher than the floor of Palm Springs, or as you climb Highway 74 into Pinyon Pines and cross over to Idyllwild.

Marvel all you’d like, but remember that we live in the desert to avoid this kind of weather.